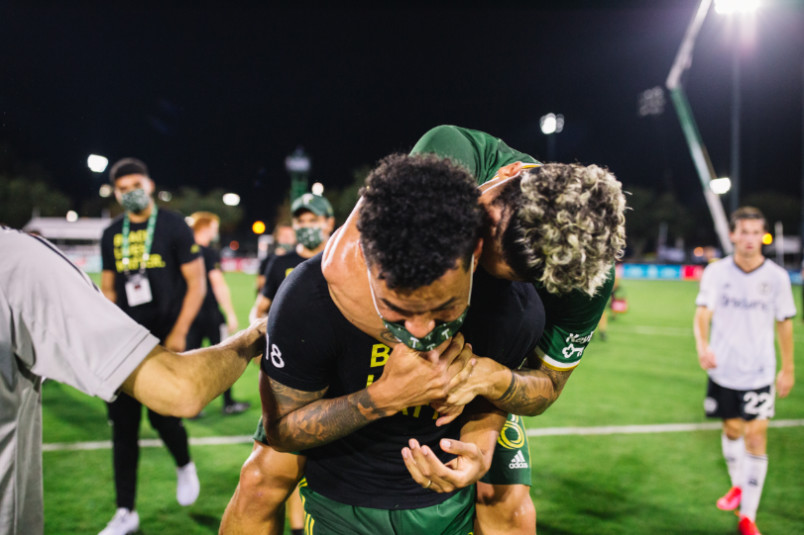 The Portland Timbers took a spot in the MLS is Back final, beating Philadelphia 2-1. Jeremy Ebobisse put Portland up in the 13th minute with Sebastian Blanco doubling the lead in the 70th. Andrew Wooten pulled a goal back for the Union in the 85th minute.

"We don’t play for the commentators. We don’t play for the writers," Portland coach Giovanni Savarese said. "We play for our fans, for ourselves, for the group, for our families. We have a tremendous belief in ourselves and we’re humble. We came here with a lot of humbleness to work, to make it difficult, to achieve something important and the guys have been able to do that. So all the hard work has been for our fans and everybody that believes in us, especially our families in Portland and the fans as well."

In Europe, John Brooks saw red in the 70th minute of Wolfsburg's 3-0 loss at Shakhtar Donetsk, exiting the Europa League 5-1. Shakhtar Donetsk played a man down from the 67th minute, scoring in the 89th and the first and third minutes of stoppage time.

"Shakhtar were a bit better and a bit more mature over the two legs," Wolfsburg coach Oliver Glasner said. "We set out to do a lot of things, and the boys kept plugging away. With the score at 0-0 when they were reduced to ten men, we had a small window when we could have turned the tide our way. We should have made the most of our chances at free-kicks and our extra man against such a strong team. At the end we lacked a bit of belief and we got tired. Shakhtar deserved to win, and we’ll learn our lessons from these two games."

Aron Johannsson subbed on in the 54th minute of Hammarby's 1-1 home draw with Falkenbergs in the Allsvenskan. Falling behind in the 9th minute, Alexander Kacaniklic equalized in the 73rd minute. Mix Diskerud's Helsingborg lost 4-1 at Malmo. Trailing from a 25th minute penalty, Helsingborg's Anthony van der Hurk equalized from the penalty spot in the 36th minute.

Moving to the soccer news, AS Roma announced a change in ownership with the US-based Friedkin Group taking over the Serie A club. According to Roma's financial press statement, the club is valued at just under $700m dollars.

The Independent's Nick Purewell goes through UEFA's player guidelines for the return of the Europa and Champions Leagues. The Telegraph's Sam Wallace takes issue with the use of five substitutions. BBC Sport's Phil McNulty on what Everton needs from manager Carlos Ancelotti. The Ringer's Ryan Hunn asks about winning trophies in front of empty seats.