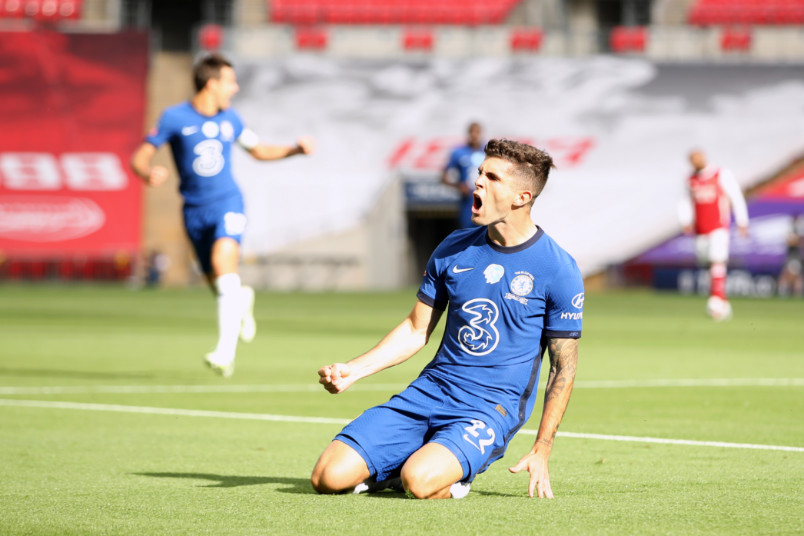 The roundup of USMNT players in Europe and Mexico starts with the FA Cup final. Though the result didn't go Chelsea's way, Christian Pulisic once again had a strong performance for Chelsea. Pulisic opened the scoring in the 5th minute in the 2-1 loss to Arsenal at Embley. Pulisic subbed out in the 49th minute with a hamstring injury. Arsenal equalized from a 28th minute penalty, scoring again in the 67th. Chelsea's Mateo Kovacic saw red in the 73rd minute.

"We got complacent," Chelsea manager Frank Lampard said. We took too long on the ball, we started playing short passes like it was a stroll. An FA Cup final can never be a stroll. We allowed Arsenal back in the game and from that point onwards, it’s always going to be difficult. A lot of today was on us. In the second-half we came out brighter, if Christian goes through and scores as opposed to missing and doing his hamstring... well, the circumstances in the game conspired against us."

Aron Johannsson's Hammarby drew 1-1 at Mix Diskerud's Helsingborg in the Allsvenskan. Max Svensson put Helsingborg up in the 21st with Hammarby equalizing four minutes into stoppage time. Johannsson subbed out in the 64th minute. Andrija Novakovich's Frosinone drew 1-1 at home with Pisa. Falling behind in the 48th minute, Camillo Ciano equalized from the penalty spot in the 79th. Frosinone finished the Serie B season in 8th-place, advancing to the promotion playoff round. They play Cittadella on August 5.

In Liga MX, Ventura Alvarado wasn't in the squad for Necaxa's 1-0 loss at Juarez. The game's only goal came in the 61st minute with Juarez playing a man down from the 62nd. Jose Torres wasn't int he squad for Puebla's 1-1 home draw with Cruz Azul. Pablo Gonzalez scored for Puebla in the 47th minute with Cruz Azul equalizing a minute into stoppage time. Puebla's Christian Tabo saw red in the third minute of stoppage time.

At MLS is Back, Orlando City knocked out LAFC 5-4 on penalties after drawing 1-1- in regulation. Bradley Wright-Phillips put LAFC up in the 60th minute with Joao Moutinho equalizing in the 90th. LAFC failed to convert its second penalty with Orlando going five-for-five.

Minnesota United beat San Jose 4-1. Robin Lod put United up in the 20th with Jacori Hayes doubling the lead a minute later. San Jose's Magnus Eriksson converted a penalty in the 50th minute. Luis Amarilla made it 3-1 in the 56th with Marlon Hairston finishing off the Minnesota goals in the 86th minute.

"We were outplayed by the opponent," San Jose coach Matias Almeyda said. "It's the fourth time they played us and the fourth time they beat us. In these instances, unfortunately you have to get your bags and go home. And even though I didn't want to lose, I had illusions to keep going. All the people that were here, the players, the staff, the executives, people back home, I thank everybody for the effort."

Portland knocked out NYCFC 3-1 to finish off the quarterfinals. NYCFC's Jesus Medina converted a 27th minute penalty with Sebastian Blanco equalizing in the 43rd. Diego Valeri put the Timbers up for good in the 65th with Andy Polo scoring in the 76th minute.

"Everyone played a very important role in the game today,” Savarese said," Portland Timbers coach Giovanni Savarese said "Everybody had exactly something that they needed to do in this game. Remember, we didn’t have that much time to recover: only three days from the last match. So we had to be smart in the way we went about this match. Everyone really contributed to make sure that we got a great win."