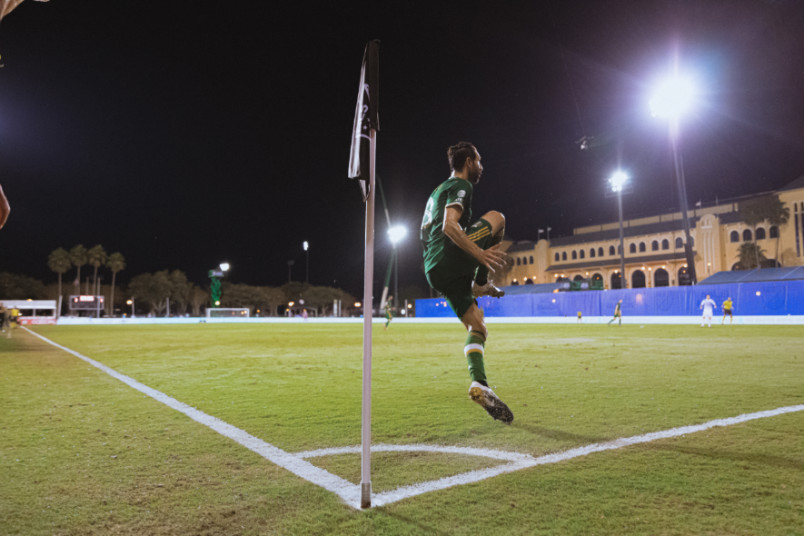 By Jason Davis – WASHINGTON, DC (Aug 12, 2020) US Soccer Players – Remember the “Summer of Soccer”? You probably do, since the phrase has been used many times over to sell Americans on the summer happenings in a sport that sometimes lacks recognition in the United States. We’ve lived through more than a few summers of soccer. Just last year, MLS joined with Home Depot in something called a “collaborative summer brand campaign” billed as Home Depot’s “Summer of Soccer”.

Here’s a bit from the league’s press release on the partnership. “The Home Depot’s ‘Summer of Soccer’ brand campaign is a great example of how The Home Depot authentically incorporates MLS stars into their marketing to provide fun and immersive experiences, like tailgate parties, to fans,” said Jen Cramer, MLS Senior Vice President of Partnership Marketing.

The sponsored version of the trope featured marketing materials highlighting Major League Soccer’s diverse player pool. The specific 2019 version of the “Summer of Soccer” centered around America’s domestic first division. In other versions, the “Summer of Soccer” might include at least one international tournament (Gold Cup, Euro, or Copa America-or all three), MLS, and the normal run of summer friendlies.

During the hottest part of the year, Americans are often inundated with soccer. That’s not new. What is new is 2020 delivering its own unique, and unplanned, take on the “Summer of Soccer”. We’re now smack in the middle of a twisted “Summer of Soccer”, even as the country confronts what comes next for our society in the Fall.

After the months-long shutdown of professional sports across the globe, the return of sports came fast, furious, and frequent. The Bundesliga returned first, jamming nine rounds of games into five weeks. The Premier League and others lavished us with a glut of games across a weekly schedule as they rushed to get their seasons completed in time to start the next one. It hardly needs to be said that the summer doesn’t usually feature club games from the likes of Europe’s biggest competitions.

While all of this was happening, MLS launched its “MLS Is Back” tournament at a single location in Orlando, Florida. Desperate to gain traction coming out of the stoppage of play and unencumbered by attendance concerns, the league rolled out a World Cup-style competition that ran 16-straight days during the group stage of play.

Between July 8 and August 1, there were just two days on the calendar without a game at the Wide World of Sports complex in Orlando. With every eligible team locked down at the Swan & Dolphin Resort, MLS threw out the typically weekend-heavy league schedule. It even attempted to turn a negative into a positive by scheduling a handful of games in morning time slots. The better to avoid the Florida heat with the notion of capturing the attention of a largely homebound sports-starved populace.

MLS Is Back wrapped up with Tuesday night’s championship match, with Portland beating Orlando in a surprising final pairing. All things considered, MLS Is Back feels like a success for a league that never wanted to be conducting a summer tournament in the first place. Placed in the context of the pandemic-stricken American sports environment, MLS Is Back kept attention on MLS. It also serviced the league broadcast partners and sponsors. The tournament concluded without a single positive COVID-19 after the ejection of FC Dallas and Nashville SC five weeks ago.

For MLS, there’s no sitting back and reveling in the relative triumph of completing that tournament. MLS Is Back was always going to be a prologue to a return to some sort of regular-season schedule when teams adjourned for their home markets.

Despite swirling uncertainty on where America is in its fight against the virus, MLS has rolled out a phased plan for the rest of its 2020 season. It starts with a six-round set of geographically based games, a scheme that will limit the need for long travel and overnight hotel stays.

Most of those games will happen behind closed doors, according to current restrictions on mass gatherings in the vast majority of MLS markets. In a few select cases, clubs will allow in a small percentage of their home stadiums capacities. The first experiment happens Wednesday night when FC Dallas hosts Nashville SC.

FC Dallas and Nashville will play twice in Frisco, Texas over four days. The two clubs that missed out on MLS Is Back get an early start to the rest of the regular season because they need to make up the three games they missed at the tournament that will count to the league’s final standings.

The rest of MLS will return to play on Thursday, August 20. FC Dallas and a handful of clubs might be able to invite in a small group of fans, but the league is not working to optimize crowds. Hence the Thursday kickoff for the bulk of the post-tournament schedule.

MLS wants to complete 18 rounds of games between now and “Decision Day” on November 8. That requires a general disregard for traditional scheduling. Beginning with August 20 and running through the end of Phase 1, MLS will play on 18 of 26 dates. Only twice will MLS stop for two days between matchdays. The only day of the week in that span without a single game is Monday.

This Summer of Soccer puts all of those other Summers of Soccer to shame. If it wasn’t for the strangeness that permeates everything, this would be a glorious time to be a soccer fan. Throw in a sprinkling of European competition with the Champions League and Europa League currently underway along with the new Liga MX season. Add in the suspension of disbelief required for a world where the stadiums are mostly empty and broadcasters must decide whether or not to use artificial crowd noise and it’s almost too much.

What we’re watching isn’t at all normal. No one would willingly sign up for a world where the stadiums are mostly empty and broadcasters must decide whether or not to use artificial crowd noise.

There’s no doubt that we’ll see other Summers of Soccer. None of them is ever likely to measure up to this one when it comes to the sheer number of summer days with a professional soccer game on the schedule. That doesn’t make what we’re watching at all normal.