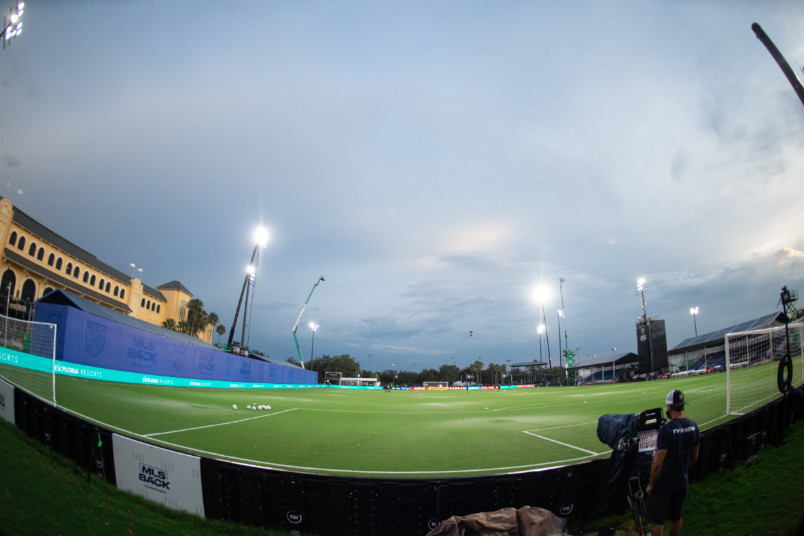 By Charles Boehm – WASHINGTON, DC (Aug 13, 2020) US Soccer Players – The MLS is Back tournament is now in the books with the Portland Timbers’ victory over Orlando City in Tuesday’s cup final. Whether the league fancies the concept enough to bring it back in some future form or not, its legacy may well live on for quite a while longer than the 35 days it took to play out. The most immediate reason for this? MLS is Back could turn out to be a significant juncture in how soccer is packaged and presented on television in North America, and perhaps beyond.

In addition to being the best hope for the league to get in some games amidst a pandemic, this event was more or less made for TV. It was co-produced between MLS and ESPN and hosted, despite the steamy summer conditions in central Florida, at Disney’s ESPN Wide World of Sports complex. The Worldwide Leader’s influence was apparent throughout. Simply put, this was one giant laboratory for soccer broadcasting.

Every single match at the tournament got resources comparable to an MLS Cup final, or so we were told, with extra cameras and microphones and associated features. The standard nighttime doubleheader schedule hit the primetime window in all four of North America’s main time zones. ESPN and MLS tried out 9am ET matches not only as a concession to the daytime heat but also as a morning ratings experiment. One which fizzled, at least by that metric.

A similar mindset guided the deployment of enormous spans of advertising placement digitally projected on just about every surface around the playing fields. That was an offering to league and team sponsors left underexposed by the COVID-19 shutdown as well as a way to test how viewers perceived and reacted to new frontiers in marketing placement. In that sense the coronavirus-enforced lack of fans in the stands helped spawn this litany of previously impossible or impractical TV tactics.

Further, games unfolded across all seven days of the week. The semifinals and final took place on a Wednesday, Thursday, and Tuesday, respectively. With the pandemic forcing schedule reshuffles around the world, soccer TV schedules overall are increasingly being detached from the usual rhythm of packed weekends plus a smattering of midweek evenings.

For fans craving some semblance of normalcy in turbulent times, Fox and Univision added their own versions of faux-crowd noise to their broadcasts. That has spanned a spectrum. Fox is cranking up the volume and using entire chants and songs from the now-absent supporters’ groups. The English FA’s feed of the Premier League promotion playoffs was something more like ambient stadium sound. Purists can access an alternate stream sans faux cheering. More casual watchers probably to find the games a less compelling product without it.

ESPN took a more minimalist approach that played up the natural sounds on the pitch instead. The broadcast captured referees’ handling of VAR decisions, coaches’ tactical talks during hydration breaks, and interactions between players and the sidelines. It provided a rare and fascinating window into the actual match environment for most fans, albeit not to everyone’s liking.

“It’s lamentable that there’s a mic. I don’t like what’s said in dressing room to be heard,” said San Jose Earthquakes coach Matias Almeyda after one of his team talks was caught by the cameras. “It shows a lack of respect. We have adrenaline running at 2,000 mph … I don’t like it at all. It’s a disaster.”

Almeyda’s stance reflects norms in soccer culture, where the dressing room is considered a sacred place and media access is generally far more restricted than here. Those boundaries may be time-honored, but they probably don’t stand a chance in the face of capitalism even if change risks further detachment from the game’s roots. For better or worse, those with such a traditionalist mindset may find themselves swamped by evolution as US and Canadian outlets continue to search for formulas that attain better TV ratings.

That remains the elusive missing link for soccer in America. With a range of North American and European leagues back in action this summer, mostly in empty stadiums, we’re seeing TV networks take more and more liberties in their presentation of the product. For ratings-challenged MLS in particular, how much do they really have to lose?

All in all, soccer on TV is coming to resemble a video game more than ever, perhaps none more than MLS is Back. That might make sense, given the ongoing generational shift in viewing patterns, with millions finding the FIFA and Pro Evolution Soccer games their gateways to the sport. This inevitably colors their sensibilities. These audiences are accustomed to customizing their experiences. Some never even set foot in a stadium or on a playing field. They’re no less desirable to leagues and advertisers, of course.

Will MLS is Back turn out to be a Trojan horse for a remodeling of the soccer television experience? Even if it’s a one-off curiosity lost in the sands of time, it may yet prove a watershed moment.