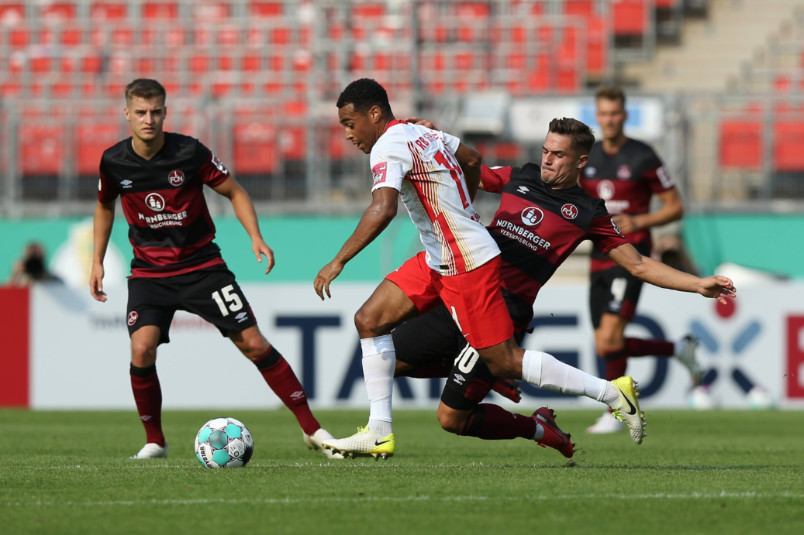 By Jason Davis – WASHINGTON, DC (Sep 16, 2020) US Soccer Players – If RB Leipzig manager Julian Nagelsmann was pandering to an American audience, that’s understandable. Every ambitious European club is chasing American interest these days, and his is no exception. Perhaps Nagelsmann thought it best to speak in terms Americans would understand when discussing a potential new role for the one player on his roster that hails from this country.

“It didn’t work out at all in training on Friday, but it did in the game,” Nagelsmann said after Leipzig’s DFB Pokal win over Nurnberg. “We wanted to open up some new spaces in our build-up play. Tyler played like a quarterback. It gives us new opportunities for the future.”

The “it” Nagelsmann was referring to was Adams’s role in the club’s tactics on the night. Adams didn’t play in his usual midfield spot, or even in his occasional role as a right back in a four-man backline. Instead, Adams played center back in a group that left out players who fit that position’s more traditional definition. It would be easy enough to call him a deep-lying midfielder.

The point isn’t about Adams’s position at all. Instead, it’s his distribution of the ball from a deep area of the field. Maybe Adams played center back, or maybe he simply dropped as deep as the deepest Leipzig line when his team had the ball. Nagelsmann turned to Adams to help his team push the ball upfield, identifying him specifically as a player who could both A) pass the ball effectively from that area, and B) defend any counterattacking opportunities Leipzig might concede because of its chosen shape.

The development should be encouraging to US National Team fans, with the usual caveats. This was only a first round cup game. It’s not yet clear if Nagelsmann will hand similar responsibilities to Adams in league and international play. Still, if Adams can refine his game as a deep-lying playmaker spraying balls around the field, particularly to wingers in the Bundesliga, he could do the same job for his country. With the amount of attacking talent available to Gregg Berhalter, that sounds like good news for the USMNT.

Adams’s positional evolution at Leipzig doesn’t sound too different from the speculation around where Weston McKennie might line up for Juventus. McKennie is a “midfielder” in a generic sense, but that hardly does justice to the myriad jobs he might take under Juventus’s new coach, Andrea Pirlo.

McKennie can play deep, defending the area in front of a backline. He can push up the field, engaging in the attack. He’s excellent in the air and provides a release valve when playing out of the back is difficult or impossible. For any coach that wants to play the ubiquitous modern pressing game, a player like McKennie is invaluable.

Where McKennie sits on the field is secondary to his role. That’s also true of Adams. Maybe that means the positional nomenclature we use is outdated. Perhaps it speaks to the versatility of this generation of players.

The American tendency towards becoming an all-around player is getting a full expression in Adams, McKennie, and a host of their countrymen coming up behind them. Soccer as it’s played now requires more than a few players on the field capable of not just winning the ball, but of turning it into a positive move forward.

At the risk of over-generalizing, American soccer seems set up to deliver more players in the Adams and McKennie mold. As professional academies and top-level youth clubs improve their coaching standards and do a better job of preparing players for the professional game, the type of gifted athlete that previously drifted away from the sport might be more likely to stick with soccer.

American soccer has long struggled to keep players from moving to more “traditional” sports regardless of that advantage. If those players continue on a soccer path and coaches funnel them into their “natural” spots on the field, it makes sense that more all-around midfielders could be the result.

There was a time when American soccer’s biggest export was goalkeepers. In a country where young outfield players were left wanting for good instruction and foreign leagues looked down their noses at them no matter their obvious talent, American goalkeepers rose to prominence. American has produced a handful of European-quality players at other positions, but never for perennial Champions League clubs.

McKennie’s move to Juventus and Adams’s rise at Leipzig point to new perceptions of Americans, particularly in midfield spots with plenty of heavy lifting. If they succeed, the knock-on effect might pull other Americans into the upper echelon of the game in Europe. Players who create and score goals get the lion’s share of the attention. For scouts and the clubs they work for, however, midfielders with varied toolkits are just as essential.

Adams might not have a defined position at Leipzig. McKennie’s role at Juventus may shift and morph over his initial period in Italy. Both are in positions to build the reputation of American soccer players. Add names like Pomykal, Aaronson, Yueill, Taitague, and more, and it’s easy to imagine a cadre of American “midfielders” doing work across the Continent.