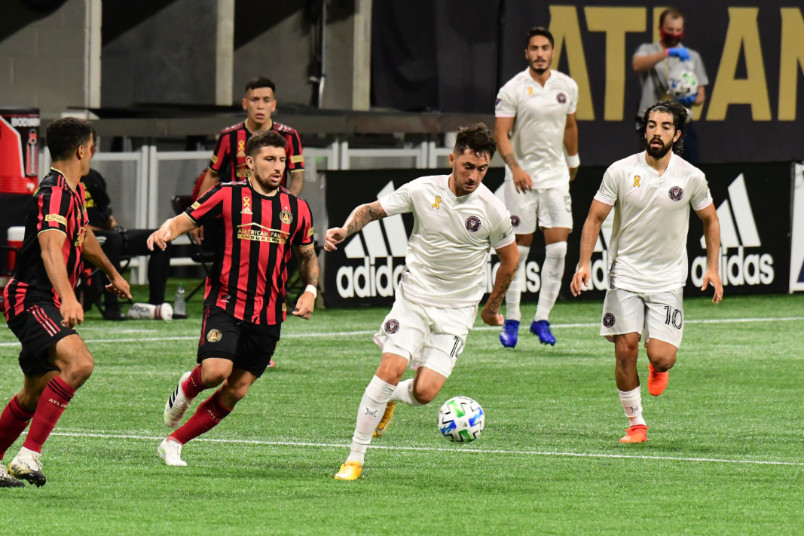 Tuesday’s soccer news starts with Atlanta United making a designated player move. The club signed midfielder Marcelino Moreno from Atletico Lanus, paying a transfer fee. Atlanta transferred Pity Martinez to Al-Nassr earlier this month and has been without Josef Martinez since the opening game of the season due to injury.

“We’re pleased to bring in a player of Marcelino’s caliber and look forward to welcoming him to the club,” Atlanta technical director Carlos Bocanegra said. “He is a dynamic attacking midfielder who has proven to be a consistent performer in the Argentine Superliga. He has fantastic balance and change of direction ability and is a player who can create on his own or bring others into the game.”

United’s situation isn’t news, but it’s worth the quick reminder. Coming off of a poor showing at MLS is Back where they lost all three group stage games 1-0, the club parted ways with coach Frank de Boer. Under interim coach Stephen Glass, they won their first game when MLS restarted in home markets. They haven’t won since, losing four out of six games. The club is currently on a three-game losing streak, something made worse by the level of competition.

In theory, even a weak Atlanta United should’ve piled on the points against Nashville, Orlando, and Inter Miami. Instead, Nashville is probably still wondering how they lost 2-0 at Atlanta on August 22 when they had no issues beating them 4-2 at home on September 12.

With all due respect to what’s happening at LAFC, there’s a strong argument that no team in MLS has slipped as badly as Atlanta. In a season that isn’t doing any team much in the way of favors, they’re the ones not able to adjust. What adding a midfielder like Marcelino Moreno does over the rest of the season is an open question. What looks like a component part in an offense still needs attacking players to turn creative passes into goals. The club also announced on Tuesday that one of them, Erick Torres, might not play again this season due to a knee sprain.

Following the club’s latest loss, 2-1 at Inter Miami, Glass talked about the reliance on designated players. “We didn’t have any of the DP’s obviously, I think it’s the first time in club history we’ve done that in a game. It puts you in a battle against a team that has top players. In terms of the work rate, I can’t fault the guys. There are certain situations that could have been prevented with a little bit more knowhow. That’s something you do get from the top guys. Balancing the playing field is about work rate and doing the things you can control well. Doing it every single time. It’s difficult when you don’t play with DP’s.”

Yes, he means Inter Miami when he mentioned that “battle against a team that has top players.” Inter is certainly willing to spend, but at best, they’re a disjointed team with a couple of recognizable names. Like Atlanta, they’re also on the outside looking in at the playoff spots.

One game into phase two of the restart, we don’t yet know how many games are left to set the playoffs. The East is in an odd situation with 14 of the 26 clubs. Rather than advancing eight teams, 7th through 10th will play off against each other for the final two slots. 11th-place Inter Miami, 10th-place Atlanta, and 13th-place DC are all a point out of the play-in round, tied on 11 points after 12 games. MLS has yet to make it clear what the rest of the schedule looks like. In other words, no team can take anything as a given other than the games already on the schedule.

Atlanta has done a horrible job since the season resumed prioritizing its schedule. The streak of losses at MLS is Back also counted in MLS, with Atlanta and Inter the only teams exiting that tournament empty handed. Getting any sort of traction in a manageable phase one was somehow too much of an ask for Atlanta. Now, they’re in a situation where disappointment is turning into expectation.

Moving to the USMNT, US Soccer confirmed that the team won’t play during the October international window. “Both players and staff are disappointed not to be able to get back on the field for the National Team and continue the progress we have made as a group,”USMNT coach Gregg Berhalter said in a press statement. “While COVID-19 continues to create challenges for us, we are confident we can find a way forward in the near future that will provide an opportunity to play matches in preparation for the important competitions next year.”

SI.com’s Jonathan Wilson looks at the return of Gareth Bale to Spurs. The Athletic’s Sam Lee asks if anybody is seriously thinking that Manchester City has issues. The Telegraph’s Tom Morgan on the bigger picture issues for English clubs that rely on attendance now facing more time without crowds.