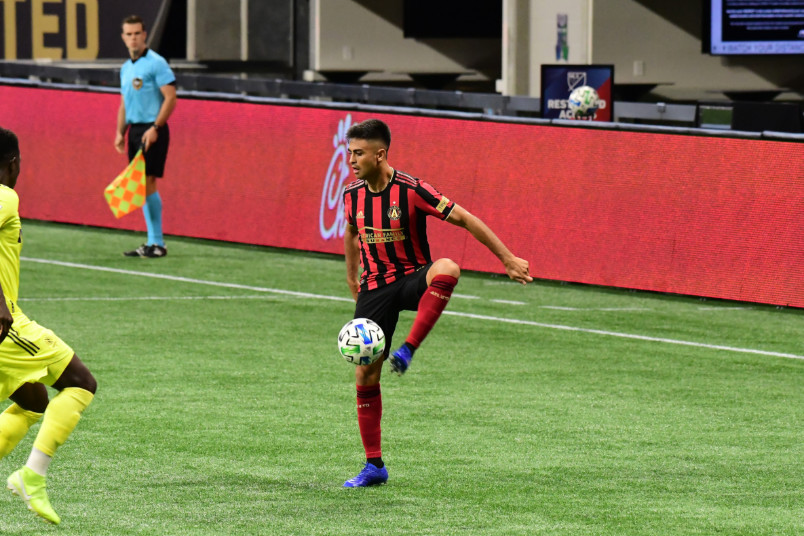 By J Hutcherson (Sep 8, 2020) US Soccer Players – With it now official that Pity Martinez is no longer a member of Atlanta United, the club has doubled down on what has become standard operating procedure. Given the right deal, Atlanta management will make the choice to move on.

“We want to thank Pity for his contributions to our club for the past two years,” Atlanta technical director Carlos Bocanegra said in the press release. “He will forever be a part of Atlanta United’s history after playing an integral part in our 2019 season in which we lifted two trophies. We’ll look to be diligent in our efforts to fill that roster spot during this window.”

With the reports of a hefty transfer fee, Martinez represents the continuation of Atlanta’s strategy. Buy and sell for more, even if it means regrouping or even rebuilding. This is a team with the resources to have kept players in place, potentially building one of the strongest and certainly most valuable rosters in league history. Instead, they sell and regroup when necessary.

The end of Bocanegra’s statement contains the other part of that strategy. When moving on means spending accordingly, Atlanta is equally willing to that.

Pity Martinez exits Major League Soccer with seven goals in 39 appearances to go with those Open Cup and Campeones Cup winners medals. Though not necessarily expected to be the continuation of Miguel Almiron, his predecessor as an attacking midfielder who scored 21 goals in 62 games before a big money move to Newcastle United, Martinez joined Atlanta in transition.

With Tata Martino leaving to coach Mexico, the club shifted around Frank de Boer. That ended with their MLS is Back exit in July and de Boer’s firing. With Pity Martinez not afraid to show his displeasure with some of his coach’s choices, this might have been a restart. Instead, it’s now his exit as well.

As it stands, Atlanta is down a coach and another marquee player as they try to turnaround their season. A 1-1 draw at Orlando on Saturday has them 8th in the unbalanced Eastern Conference. That may flatter Atlanta now, but eventually it’s going to take putting points together to show that they belong in the playoff places. As obvious as that observation may seem, it’s easy to flatter this club by keeping them in the conversation regardless of their record.

“In terms of importance, we know how important it is to come here and not get beat as a first,” Atlanta interim coach Stephen Glass said following that draw in Orlando. “We want to come here and win. So, we are not over the moon. We know there is more work to be done. Especiallyin the top half of the pitch, we could have slightly been better, looked after the ball better. I think you saw that late in the match, we were trusting it and really pushing it. We created some great opportunities.”

While Atlanta is hardly the only preseason favorite having trouble turning opportunities into winning goals, it’s worth asking where the goals will come from over the rest of 2020. Every game at MLS is Back ended 1-0 against them. Josef Martinez is one of the most prolific strikers in MLS history. An ACL injury in February seemed to sink Atlanta’s season just as it began. Instead, they won both of their games before the pandemic called time on the season. Now, they’re a team that has only scored more than two goals in a game once since play resumed. That also counts for their only win, 2-0 at home against Nashville on August 22.

Though another not exactly like-for-like replacement, Cubo Torres is the closest thing they have as an answer for the absence of Josef Martinez. Since joining Atlanta at the end of July, he’s scored no goals in four games. Torres’s previous MLS experience suggests that he’ll eventually make good with United. He won’t put up Josef Martinez numbers, but neither would anybody else Atlanta could’ve reasonably brought in.

Reasonable is also the word to use across the board with this club right now. The reasonable expectation is that Atlanta United will always be in the conversation at the top of the Eastern Conference table. That’s no longer the case. Now, what’s reasonable is putting together a playoff run.

The mention of bringing in another player to fill Pity Martinez’s designated player spot speaks to both parts of that United strategy. There’s no doubt the club will spend when necessary, but they’re attempting to do it in a convoluted market. The window stays open even as the seasons start up in Europe, with no real idea of what that market may or may not produce.

In this great unknown of a season, MLS has its teams playing a handful of games in front of them. They’ll wait for the next stage of the schedule, and eventually their path to try and claim a playoff spot. By then, Atlanta may have played themselves into an even bigger problem.