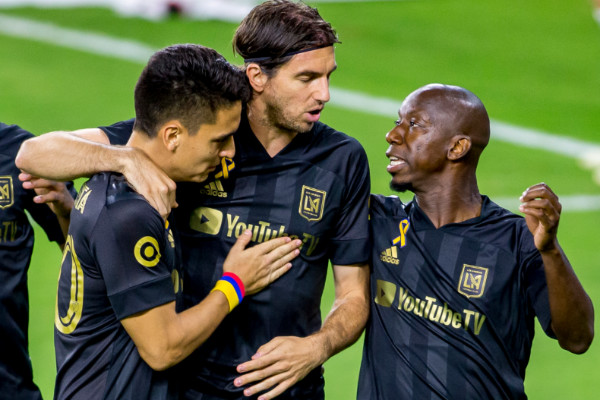 Thursday’s soccer news starts with another round of lopsided shutouts in MLS. The biggest margin of victory may indicate a turnaround for one of the league’s more interesting stories. LAFC got it together at home against Vancouver, winning 6-0. Dejan Jakovic opened the scoring in the 2nd minute with Bradley Wright Phillips adding goals in the 5th and 11th. An own-goal made it 4-0 LA in the 14th. Diego Rossi added a goal in the 33rd with another own-goal finishing things off in the 68th minute. LAFC goalkeeper Pablo Sisniega didn’t need a save to get the credit for the clean sheet.

Not as surprising was another lopsided loss for San Jose, losing 5-0 at Colorado. Cole Bassett put Colorado up in the 35th minute with Jonathan Lewis doubling the lead in the 50th. Jack Price picked up an assist on both goals. An own-goal made it 3-0 Rapids in the 70th. Nicolas Mezquida scored in the 79th with Andre Shinyashiki finishing off the scoring in the 84th minute. William Yarbrough kept the clean sheet with four saves.

“Realistically, we have all been really looking at ourselves,” San Jose coach Matias Almeyda said. “There are no excuses. It’s really sad to lose the way we have been losing, mostly because we have fans that have accompanied us at a distance. Every team has their history, some more successful than others but nonetheless it’s all history. This is a moment I’ve never experienced in my life. I have some of the blame to not find a way.”

Chicago also put together a one-sided shutout in their 4-0 home win over Houston. Robert Beric put the Dynamo up in the 15th with Fabian Herbers scoring in the 23rd. Alvaro Medran made it 3-0 in the 40th with CJ Sapong converting an 89th minute penalty.

“I think first of all, our travel today was very tight in terms of players getting any kind of rest for the game,” Houston coach Tab Ramos said. “So far, I’ve noticed us going through this type of scenario, we’ve been able to travel, rest and prepare for games. I felt like tonight we were very hurried. We had our meals in a very short period of time, and it felt like we got off the plane and all of a sudden we were playing. I’ll start with that. After that, we didn’t have a good game from the beginning.”

New England beat Montreal 3-1 at Gillette Stadium. Henry Kessler scored in first-half stoppage time. Gustavo Bou added a Revolution goal in the 49th with Diego Fagundez scoring in the 65th. Lassi Lappalainen pulled a goal back for the Impact in the 86th minute.

“We had chances maybe to score a few more goals tonight,” New England coach Bruce Arena said. “I think we’re fortunate we ran into a tired team in Montreal. And they had a couple of injuries, but that’s all part of the game right now. I think in the league, it’s very challenging with all the games that are being pieced together in a short period of time.”

A penalty was the difference in Atlanta’s 1-0 home win over FC Dallas. Jeff Lawrentowicz converted from the spot in the 55th minute with Brad Guzan making one save to keep the clean sheet.

“Anytime you’re at a big club and things aren’t going the way they should, there’s plenty of people that want to tell you,” Atlanta coach Stephen Glass said. “But to be honest, the guys in the dressing room in here know that it’s not been as good as it should be, and they’re determined to put it right. Sometimes that can be an area of motivation.”

FC Cincinnati and Philadelphia finished scoreless at Nippert Stadium. Cincinnati had the game’s only shot on goal.

Columbus beat Minnesota United 2-1 at home. Lucas Zelarayan put the Crew up in the 31st and assisted on Pedro Santos’s goal in the 70th. Robin Lod scored for Minnesota in the 88th minute.

Orlando beat Sporting Kansas City 2-1 on the road. Tesho Akindele scored for Orlando in the 36th with Benji Michel doubling the lead in the 38th. Johnny Russell got Sporting’s goal in the 53rd.

The Red Bulls beat Inter Miami 4-1 in Fort Lauderdale. Mandela Egbo converted a 14th minute penalty to give the Red Bulls the lead. Juan Agudelo equalized for Inter in the 39th. From there, it was all New York. Brian White scored in the 49th with Benjamin Mines making it 3-1 in the 85th. Daniel Royer added a fourth goal in stoppage time.

Nashville shutout DC 1-0 at home. Daniel Rios scored in the 70th minute with Joe Willis making one save.

Real Salt Lake held up at home with a 2-0 win over the LA Galaxy. Albert Rusnak converted a 65th minute penalty and assisted on Damir Kreilach’s goal in the 72nd. RSL goalkeeper Andrew Putna made one save to keep the clean sheet.

Portland shutout Seattle 1-0 at Providence Park. Yimmi Chara scored in the 13th minute. Portland goalkeeper Steve Clark making six saves in a game where the Timbers only put two of their shots on goal.

DW’s Matt Ford on the pressure and realities for allowing fans to attend games in Germany. The LA Times’ Kevin Baxter reports on the potential quarantine issues for MLS players accepting international callups. The Telegraph’s Sam Wallace explains the big picture economic issues for club soccer in Europe and the potential for a breakaway. The KNVB officially announces that Frank de Boer is the new coach of the Netherlands national team.