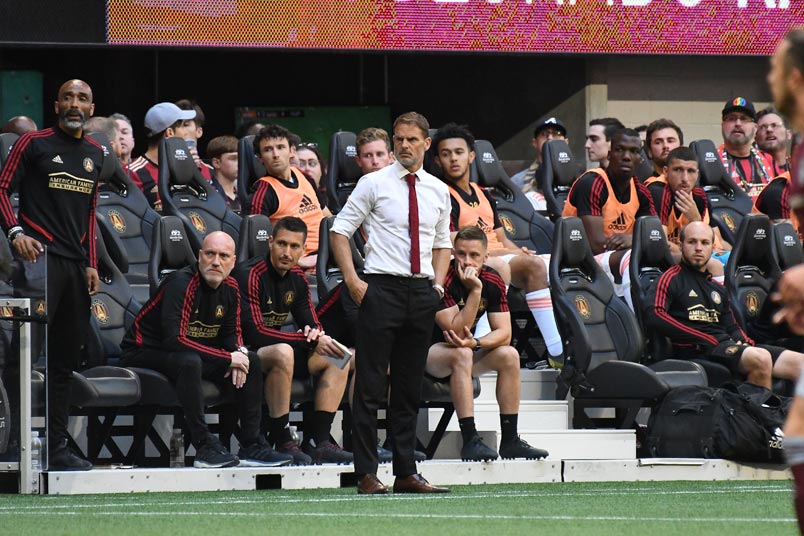 By Charles Boehm – WASHINGTON, DC (Sep 17, 2020) US Soccer Players – Sometimes we learn more from the relationships that don’t end well than the ones that do. So it may prove for Frank de Boer and MLS.

In July, de Boer became the league’s second coaching casualty of the year, parting company with Atlanta United after going winless in a three-and-out campaign at the MLS is Back Tournament. Despite the Five Stripes winning the US Open Cup and Campeones Cup last season, their increasingly plodding performances eventually fell so far short of the lofty expectations they’d set for themselves in their first two seasons that de Boer ran out of time.

The former FC Barcelona and Ajax star had arrived in Georgia in the wake of short and ill-fated stints in charge of Inter Milan and Crystal Palace. So leaving MLS in suboptimal fashion would seem to be another red mark on his coaching resume. As it turns out, reports this week suggest something quite the opposite.

De Boer is said to be well into the process of negotiations with the Dutch federation to take over the Netherlands national team following Ronald Koeman’s departure for Barcelona. He could take the wheel as soon as next month’s friendly against Mexico. Should that happen, he’d face another former Atlanta boss, Tata Martino, who nimbly leveraged his MLS stint into one of the biggest jobs on this continent.

On one level, it’s a logical linkup. De Boer starred for his country over a decade during his playing days, earning more than 100 caps and featuring in two World Cups and three European Championships. He served as an assistant coach there under Bert van Marwijk. With 2022 World Cup qualifying looming, albeit on an already-delayed timeline due to the COVID-19 pandemic, the federation doesn’t have a ton of time to peruse its options.

From another angle, it’s startling to see such an immediate upward move for a coach who seemed to struggle in MLS more often than not, especially compared to his predecessor Martino. Taking over a run-and-gun team fresh off an MLS Cup championship run, de Boer cut against Atlanta’s established ethos. His Atlanta sides often used possession as a defensive shield rather than a weapon for attacking. He unsettled the locker room with a markedly different management style.

Still, de Boer left with an overall record of 31-19-5. The awkward marriage lasted long enough to lift some hardware. Even if the Dutch job doesn’t line up for him, the simple fact of his strong candidacy suggests his reputation hasn’t been excessively dinged by his mixed bag in MLS. As risky as it can be to extrapolate bigger conclusions off anecdotes like this, it could be that the stigma the league carries in some circles abroad is fading.

For most of our living memory, soccer in North America has carried a frontier connotation to those overseas, and not without reason. The wild and crazy stories of the old NASL days live long in the collective memory. That mentality tends to amplify MLS’s differences from its counterparts elsewhere.

Ruud Gullit was another Netherlands legend who couldn’t quite master MLS, helming the LA Galaxy for part of the 2008 season. That was perhaps the lowest ebb of David Beckham’s time in the league. After his departure he said “it was too much of a clash between my way of being used to working and the rules of the MLS.” Something similar has struck many other luminary coaches from abroad over the decades. Club executives came away with the conclusion that risk of culture clash was just too high to trust their vacancies with outsiders.

At some point, MLS’s quirks grew more compelling and less ludicrous in the eyes of at least some percentage of curious onlookers. Nowadays, even the toughest and least glamorous jobs in MLS are likely to draw interest from names of note.

Matias Almeyda was convinced to try his hand at a tricky project in San Jose. Raphael Wicky left a solid U-17 national team gig at US Soccer to move across town to the Chicago Fire. Diego Alonso made the Inter Miami experiment his next destination after leading Monterrey, possibly the best-run club in Liga MX. Thierry Henry picked Montreal, perennially the hottest seat in MLS, as the spot to rebuild after a bruising stint at Monaco.

Even if FC Cincinnati could call on Jaap Stam’s existing relationship with general manager Gerard Nijkamp when they were searching for their next manager, Stam arrived with seemingly genuine interest and excitement.

“You see a lot of games that are very open, in terms of play,” the distinguished Dutch international said of his new league as he got an up-close introduction at MLS is Back, sounding almost like a soccer anthropologist. “Teams want to go forward as quickly as they can, so taking a lot of risk, as well. That makes the game very interesting because there’s a lot of space, so it goes up and down the pitch. Certain teams are very structured in their way of playing and what they want to achieve.… I’ve compared it a couple of times to the (English) Championship as well. There’s a lot of intensity in games and enthusiasm with teams wanting to go forward some, while some teams are playing quite direct. It’s interesting to see the level of the teams and individual qualities of the other players as well.”

Top-level coaches are nomads by nature. Many will consider going just about anywhere on earth where there’s a team to coach and a decent paycheck to bank. It’s probably not a complete coincidence that more of them are touching down in MLS at a time of increased spending across the board. Nor should they automatically be assumed superior to homegrown options.

Still, it’s encouraging for the league to see a mostly beneficial inflow of human capital in this department. Even a single season under an adept coach with global credibility can hold pivotal lessons for domestic players aspiring to the game’s highest echelons, whether that year’s team finds a happy ending or not.