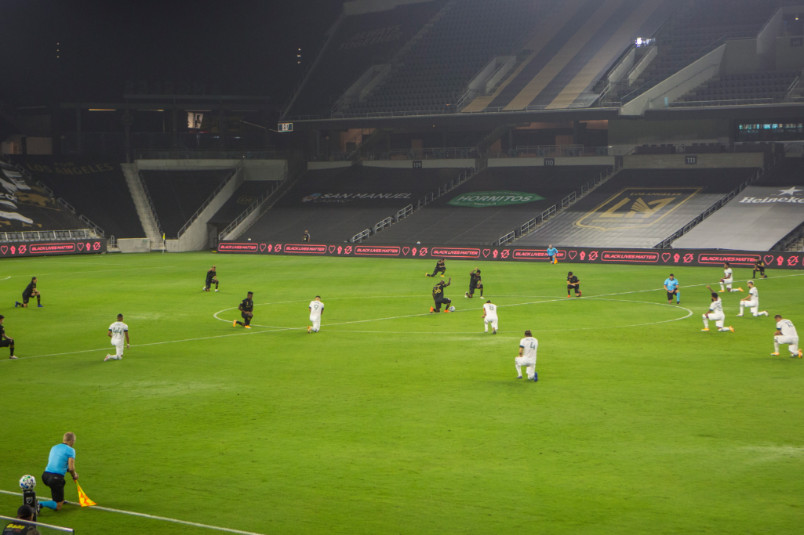 By Clemente Lisi – NEW YORK, NY (Sep 21, 2020) US Soccer Players – A month into the restart of the MLS season and some trends are beginning to come into sharper focus. While the pandemic has made this an unusual season for sports across the globe, MLS has been able to persevere in a year notable for marking its 25th season in existence.

MLS has been through tough times before, but nothing like this season. With help from the players, the league has installed a series of safety protocols to keep the coronavirus from spreading. That has allowed for games to take place largely without fans in the seats as teams figure out a way to navigate the late summer, always a crucial juncture on the MLS calendar.

The restart comes in phases with MLS well aware of the risk of travel. The regions for teams have grown, with the Canadian teams now in the United States for phase two.

2020’s start-and-stop schedule hasn’t been kind to teams and players who expected to do well this season. The league’s injury report tells part of the story. The Portland Timbers, who won MLS is Back, have five injured players. Minnesota United has seven, including notables like defender Ike Opara and veteran midfielder Osvaldo Alonso.

Here’s a look at three teams that are doing well and three heading in the wrong direction.

As Phase 1 of the restart comes to an end, the Crew (8-1-3) are tops in the Eastern Conference and first overall. Columbus, despite an injury to Darlington Nagbe, has done a very good job navigating their schedule. Under coach Caleb Porter, the team has been grinding out results. They could very well be a serious MLS Cup contender thanks largely to striker Gyasi Zardes and its depth though the likes of defender Josh Williams and striker Fanendo Adi.

Outlook: October will be key for the Crew. The race for the top spot in the conference remains tight, and games against Toronto FC will make the difference. Should Nagbe return, the Crew will see its midfield much improved. Still, the ability to put together a team effort is what can win a championship.

No matter how they’re doing, never rule out the Sounders. Instead of having to put together a late surge, coach Brian Schmetzer’s side is 6-2-3 and one of the most consistent in the Western Conference. Strikers Jordan Morris and Raul Ruidiaz have been explosive over the past few weeks, and that’s made a huge difference this summer. Nicolas Lodeiro is also in top form again, another key to Seattle’s recent great run of form.

Outlook: Morris, after a stellar year in 2019, is looking like the season’s top MVP candidate. If the Sounders can continue to score at its current rate, there could be no one that can stop them this fall.

Philadelphia is legit. We saw that at the MLS is Back Tournament, and its carried over into the regular season. As coach Jim Curtain put it, the Union are “punching above their weight.” Aside from being an almost certainty to make the playoffs, Philadelphia has often made up for its inconsistent offense with a tight backline and the incredible abilities of goalkeeper Andre Blake.

Outlook: The best thing going for the Union is its grit and Cinderella-style abilities. This is a hardworking, blue-collar team that can pull off an upset anywhere. Underestimate them at your own risk when games matter most.

At the other end of the table…

Favorites to win MLS Cup at the start of the season, LAFC have largely been a disappointment. This is a team that has the players to win titles even without reigning MLS MVP Carlos Vela lost to a knee injury. In MLS, spending and big-name players don’t always matter. It’s up to coach Bob Bradley to help Los Angeles rebound at such a critical juncture of the season. Currently in 9th-place, LAFC is fighting for that final playoff spot.

Outlook: Don’t rule LAFC out. The goal at this point is to sneak into the postseason and get hot at the right time. Striker Diego Rossi, currently the league’s top scorer, needs to continue bagging goals. Things can switch quickly in MLS. LAFC has time to put together a playoff run, one that could still include Vela.

The Red Bulls are just 4-6-2 and find themselves in the position of both struggling and having to right the situation following the recent firing of coach Chris Armas. While his dismissal isn’t all that surprising, it leaves a team already in a tough position now having to figure out how to somehow salvage the season. Selling off talent the past few years may have finally caught up with RBNY. Their attack has been shambolic, scoring just nine goals in 12 games.

Outlook: The Red Bulls have been here before. The team’s futility over the past 25 seasons a major talking point every fall. It may be time to blow it all up and rebuild by giving its promising young players more time and going back on the market to sign a Designated Player, preferably a striker.

An expansion season is tough for any team. Throw in a pandemic, empty stands and scheduling issues and it makes for an even more complicated year. Inter Miami CF can certainly blame 2020 for their woes, but there are other issues here as well. This is a team that likes to be rumored with signing big names and the recent arrival of Gonzalo Higuain proves that point. What this side needs is chemistry and experience together, something that will come with time.

Outlook: This is still MLS where things can change quickly. DC or Atlanta could’ve just as easily taken this slot. Those three are in a group of teams near the bottom of the Eastern Conference that are still thinking playoffs. Good for all of them since it makes the league better. For Inter, the real challenge is finishing above Nashville. Doing that may mean making the playoffs.