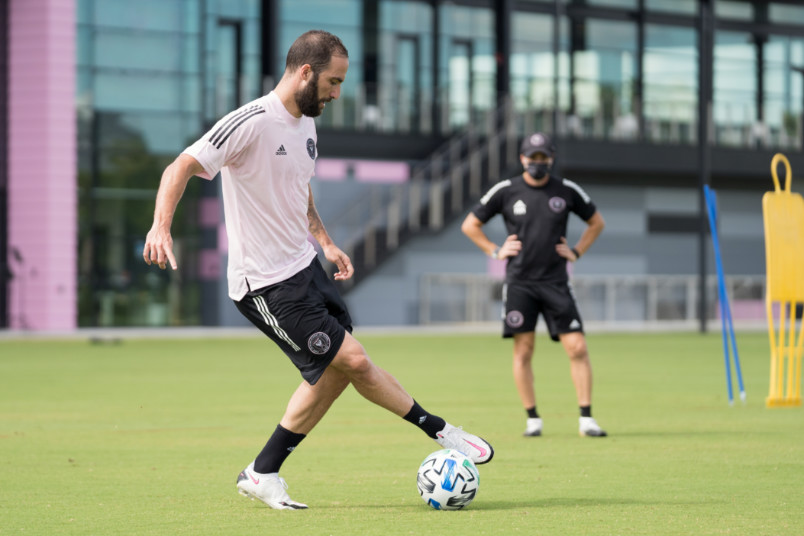 By Jason Davis – WASHINGTON, DC (Sep 30, 2020) US Soccer Players – That’s not the way Gonzalo Higuain wanted it to go. Inter Miami’s new big-name signing made his MLS debut on Sunday, starting in a downpour for Inter as they took on one of the Eastern Conference’s best teams. Higuain made his presence felt early against the Philadelphia Union, acrobatically throwing himself over for an overhead kick attempt on goal in the 20th minute.

Unfortunately for Higuain, that shot, which caromed off the post and went out of touch for a goal kick, was the highlight of his day. Inter Miami eventually fell behind 2-0 at Subaru Park, chasing the game in the difficult conditions against a well-drilled team anxious to take three points off of expansion team fodder.

After a penalty call against the Union for the kind of handball sparking controversy across the soccer world in 2020, Higuain stepped up to the spot in the 77th minute with a chance to bring his side within a goal of Philadelphia. Then the man who scored more than 100 goals for Real Madrid, who manned the striker position for two of the biggest clubs in Italy, and who can point to five domestic titles on his resume… sent his penalty kick well over the bar.

Still, the miss in Chester was Higuain’s fourth-in-a-row going back to his time with Juventus. It’s almost impossible to imagine anyone but one of the world’s top goalscorers over the past decade would take the kick for his new team. Yet, Inter Miami might be wise to rethink the role.

Higuain stepping up to the spot in his first MLS game despite that record and the presence of several other capable Miami players being on the field crystallizes the scrutiny Inter’s first famous name faces. As is the case with every world-famous name that joins MLS, Higuain gets outsized attention. No one in Miami, save those in the owner’s box, and few in MLS, have the name recognition of the 32-year old. The spotlight, particularly from abroad, will be intense.

Miami is already one of the higher-profile clubs in the league outside of American borders because of David Beckham’s involvement in the team. Higuain is the first major Inter signing that connects with Beckham’s massive influence in Europe.

At least one internet outlet used the word “horror” to describe Higuain’s MLS debut. That’s probably a little harsh, but it pegs expectations for Higuain. When much of the rest of the world still probably view MLS as a “retirement league” several steps below a competition like Serie A, Higuain won’t get much leeway. Fail to score or fail to be the best player on the field in most matches, and the headlines will stay incendiary.

It didn’t help Higuain’s cause that he followed up the penalty miss by getting into an altercation with several Philadelphia players. The Union wasn’t shy about celebrating in front of the shiny new DP, presumably crossing a line.

Remember that Higuain follows in the footsteps of Zlatan Ibrahimovic as he arrives in MLS. Ibrahimovic dominated the league, scoring twice in his debut on national television on his way to 30 goals in 2019. Though his team missed out on collective success during his stay, it’s impossible to deny that he didn’t quickly put together one of the best seasons in league history. Higuain is not Ibrahimovic. He won’t carry the same expectations, but that doesn’t mean he’ll get a pass either.

There’s pressure on everyone in Miami involved with the signing. Ahead of the season and before the pandemic changed its schedule and scope, Inter Miami general manager Paul McDonough said that the club would prefer to add any DP signing in the primary transfer window, rather than try to integrate an incoming player during the summer.

As the season played out and Inter Miami struggled to score goals, a consensus emerged that the club needed a solution at the front of the formation. With the fan base also calling for Inter to bring in a name with star power, McDonough’s stated preference went by the wayside. Higuain’s late summer exit from a Juventus team in transition opened the door for a quick move to the United States.

Maybe McDonough changed his mind. Or maybe it was changed for him by one of the more powerful figures at the club. Beckham has been largely notable by his absence so far this season, but lead owner Jorge Mas remains out front on every issue surrounding the team. It was Mas that posted photos to social media of Higuain’s arrival in Miami, even before the club had officially signed him.

Higuain is bound to find life in MLS a little different. The usual concerns about travel and weather aside, the team he joins is not primed to compete for a title in 2020. Like every player before him who traded a championship-caliber European team for an MLS adventure, frustration over the quality of his teammates and the results will crop up. The striker’s reaction to being “trolled” by Union players after his miss doesn’t bode well for his ability to adapt to those difficulties.

Inter Miami head coach Diego Alonso must figure out how to get the most of his new addition while managing a player unaccustomed to losing. Higuain does have former Juventus teammate Blaise Matiudi behind him to serve both as a friendly face in the new team and as a figure the goalscorer can trust on the field. How far that will take Inter this season remains to be seen.

Miami got its splashy, marquee name in less than ideal circumstances. That counts for the entirety of its debut season. The rest of the regular season is about making the best of a bad situation with an eye towards 2021.

With nine games left in the season and Miami rooted to the bottom of the Eastern Conference standings, the prospects for making the playoffs are exceedingly dim. Higuain is already an answer for next season, when the core group of players returns for a second, hopefully, less chaotic campaign.