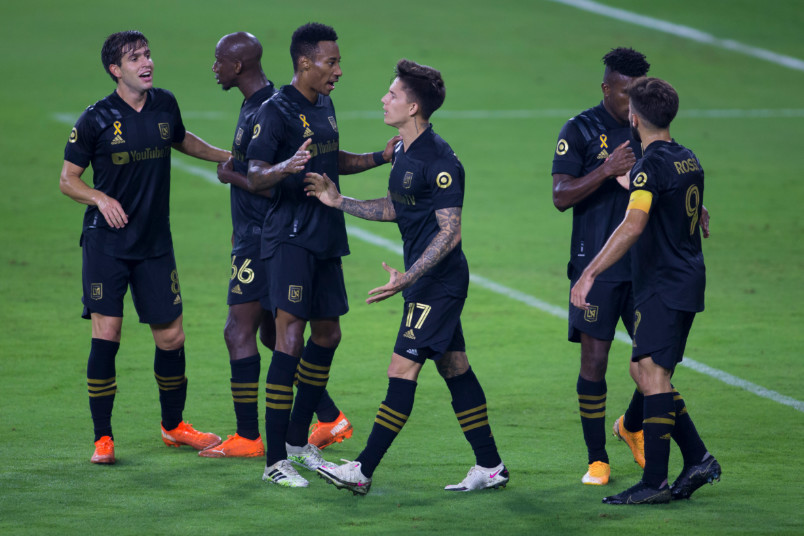 By Luis Bueno – RIVERSIDE, CA (Sep 23, 2020) US Soccer Players – Los Angeles FC had a magical year in 2019. In its second season, LAFC pieced together one of the finest runs in league history en route to the Western Conference final. LAFC had the most team points and highest goal-differential in league history. They equaled the record for most goals scored by a team in one season. Its star player, Carlos Vela, was named league Most Valuable Player after scoring a league-record 34 goals.

A year ago, LAFC was fighting to win a championship to seal its status as the best team in league history. This year, LAFC is fighting to stay relevant.

Through 12 matches, LAFC is out of the postseason picture. LAFC sits in 9th-place in the Western Conference table on the strength of a 4-5-3 record. More concerning is the club’s defense has allowed 27 goals, just 10 short of what the club allowed in all of 2019.

The window for winning an MLS Cup with this group hasn’t closed, of course. Anything can happen in the postseason, especially this year. But the window for this team to be the dominant side in MLS has already slammed shut. LAFC captured magic in 2019 and looked like it would be a standard-bearer for, if not years to come, then certainly this season at the bare minimum. However, 2020 is no longer about trying to keep a stranglehold on the rest of the league. This year has become about saving face for LAFC.

Now, the situation is not entirely dire. The difference between 9th-place and the playoffs is razor-thin. Two points separate 11th-place Real Salt Lake (14 points) from 6th-place Colorado (16). Even front-runner Seattle (21) and 5th-place Portland (18) are a stone’s throw away from one another.

Yes, it is late September, but that doesn’t mean much this year. These aren’t the last gasps of summer when you consider there’s only been a dozen games played. Teams are still trying to figure themselves out.

Unfortunately, that means the summer transfer window has not been much use to clubs, at least not in the way it has been in the past. In a regular season, a team will make a summer move after developing a sizeable knowledge base to work from. This year, teams were not sure what they really had until July at the earliest. By then, it was a bit late to start taking the steps to make significant moves.

There has been movement across the league. Players like Blaise Matuidi and Gonzalo Higuain (both Miami FC) as well as Marcelino Moreno (Atlanta United) have joined the league as Designated Players. LAFC made such a move last season, bringing in Brian Rodriguez during the summer transfer window. Teams within the league have also made moves like Kei Kamara to Minnesota and Angel Reyna to DC United.

Normally, it’s right about now, when a team has played around a third of its games, where the holes appear. For LAFC, the biggest holes would be at central defense and depth at midfield and forward. A year ago, when LAFC needed goals off the bench or to change the lineup around, coach Bob Bradley could turn to players like Adama Diomande and Christian Ramirez. Now, things are not quite the same.

In the first game after the league resumed, LAFC found itself in a tough situation. Bradley had removed an ineffective Rodriguez at halftime and then saw Vela go down with an injury. Bradley Wright-Phillips and Diego Rossi were already out on the field. So Bradley turned to Adrien Perez, who the club signed a year ago from an indoor soccer team. Danny Musovski has also seen quite a bit of playing time as LAFC tries to make up for Vela’s loss. While fine prospects, Musovski and Perez are drop-offs from Diomande and Ramírez.

LAFC needs help in the midfield and along the backline as well. Allowing 27 goals in 12 games this season is more than two per match. Last season, LAFC allowed 37 goals in 34 games, barely a goal a game.

This version of LAFC can still recover. Midfield stalwart Eduard Atuesta returned from injury in LAFC’s 4-2 win over Portland on September 13 and played 45 minutes in the 3-0 loss to Seattle on Friday. Much of the midfield’s struggles trace back to his absence. Meanwhile, Vela is, according to Bradley, weeks away from returning. He could conceivably be back in mid-to-late October. The last day of the season is November 8. That suggests that Vela could still play some meaningful minutes during the regular season.

Will it be the same as last year, when LAFC was on a torrid pace all season and rolled into the playoffs with Vela setting individual records and the team polishing off impressive marks as well? Clearly not, but this whole year is turning out to be a bit like a tournament.

Getting to the postseason now is the important thing. It’s a wide and welcoming safety net. There’s nothing stopping a team like LAFC from closing the door on a lackluster regular season with a playoff run. That’s going to be the only way not to feel like 2020 has been a gigantic step backward for this franchise.