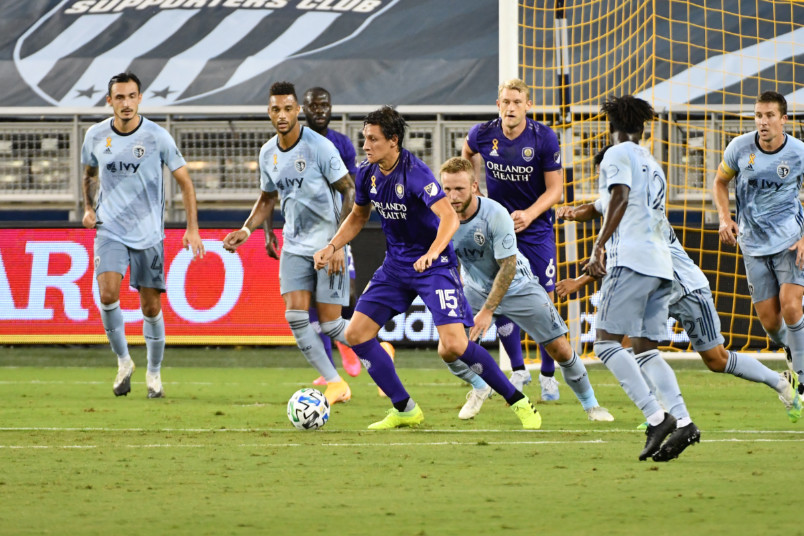 By Jason Davis – WASHINGTON, DC (Sep 25, 2020) US Soccer Players – Wednesday night delivered 13 games featuring all 26 teams in Major League Soccer. That’s 13 games worth of information to process in a season that has been light on clarity. Thirteen games featuring “new” match ups. That meant a different set of pairings than the monotonous repetition of phase one of the return to play.

MLS made concessions to the COVID-19 pandemic. The three Canadian outfits will play every one of their remaining regular-season games in the United States. That means we’ll get a better sense of how good or bad the Canadian teams are, though it might be too early for that hardship to be a significant factor in the results.

Every team is still dealing with the difficulties of the pandemic protocols. Most notably, that means the same-day travel requirements for road games. Wednesday night did nothing to dispel the logical belief that the same-day flights will only increase home-field advantage. In a league already known to tilt heavily in favor of the team playing in their building, that’s a major thing. Not that the night wasn’t without a few surprises.

With all of this data piled up in front of us, let’s see what we learned from a record-breaking night in MLS.

The imminent demise of a pair of expected contenders in 2020 will wait courtesy of significant wins. One was by the most narrow of margins. The other provided an emphatic reminder of the relentlessness of the league’s best attack.

The first was Atlanta United’s 1-0 victory over FC Dallas at Mercedes-Benz Stadium. The Five Stripes received something of a gift from FC Dallas head coach Luchi Gonzalez, who chose to rest several starters following the weekend’s trip to Kansas City. Atlanta’s desperate need for a win lined up with a visit from a team that could have produced a stiffer challenge under different circumstances.

Nevertheless, it took a penalty kick for Atlanta to secure three important points. This wasn’t a confidence-building win as much as it was an exhalation of relief. Veteran Jeff Larentowicz, the type of player Atlanta can turn to in its worst moments to be a steady leader, did well to put the kick away. Regardless, lacking the kind of dominant attacking performance Atlanta could put out on its best days, beating FC Dallas is only a very small step in the right direction.

The final game of the night had another of the league’s top teams brought low rediscovering the attacking dominance that Atlanta is still missing. LAFC’s 6-0 victory over the Vancouver Whitecaps can’t be all that impressive considering the Canadian team’s difficult circumstances. LAFC needed an emphatic win to reclaim belief in Bob Bradley’s system.

LAFC set a record in the win, scoring four goals inside of 14 minutes. Two of those came off the foot of Bradley Wright-Phillips, another veteran proving his worth for a team that needs experienced players to help smooth out the bumps. LAFC might be rich in young, South American attackers, but leadership usually equals experience in this league.

We learned on Wednesday that LAFC can still score. It will take a few more performances close to that level to convince anyone that this is the same team that waltzed to a Supporters’ Shield last season. At the very least, Bradley can forego the expressions of disappointment and concern over his team’s energy levels for a few days.

Next up for LAFC is a home match against the imploding Earthquakes. That bodes well for the chance of LAFC putting together a winning streak for the first time in 2020. That’s how strange this year has been. A team that set a record for points in a season in 2019 has yet to win two games in a row.

The lack of diversity in the schedule wasn’t just odd. It put limits on just how far we could go in identifying the league’s best teams. Wednesday helped the cause for one club in particular.

Based on the standings, no team in MLS has been better in 2020 than the Columbus Crew. They’re on a five-game unbeaten run entering Wednesday’s match, taking 14 of a possible 18 points over that span. Two of the wins in that run came against Cincinnati and Nashville, clubs that don’t throw up the stiffest competition. Columbus also dropped points at Cincinnati and Chicago, acceptable results by MLS standards but not the type of convincing wins necessary to build a “best in the League” reputation.

The Crew’s 2-1 win over Minnesota on Wednesday is meaningful evidence that the “best in the league” label isn’t misplaced. Facing off against a quality opponent challenging for a top spot in the Western Conference, Columbus handled the Loons through goals by Lucas Zelarayan and Pedro Santos.

Porter’s team managed that feat without Darlington Nagbe. Columbus can’t be at its best without the midfielder, but beating Minnesota sans Nagbe shows the Crew doesn’t need to be at full strength to play winning soccer. That’s a trait that often comes in handy come playoff time. That goes a long way towards firming up a status as one of the league’s top teams.

While the Crew had reasonably high expectations coming into the season and seems to be meeting them, Orlando was a different story. It’s Oscar Pareja’s first year in Florida after all, so a settling-in period would be natural. Instead, Orlando used Wednesday’s trip to Kansas City to send a message. Despite the difficulty of the travel conditions, the Lions struck for two goals to secure three points and affirm their credentials as one of the top teams in the Eastern Conference.

Pareja made an immediate difference, and even a pandemic couldn’t stop Orlando from getting better under the former Rapids and FC Dallas boss. Orlando has 10 games left to consolidate their position among the top handful of teams in the Eastern Conference. What began as a year with the hope of finally making the playoffs is now a season that carries much larger aspirations.

Wednesday night’s soccer explosion wasn’t just the first time every MLS team played on a single day. It was the first step towards a more normal, relatively speaking, schedule. With that might also bring some answers to so many of the questions still lingering in this mad season of 2020.