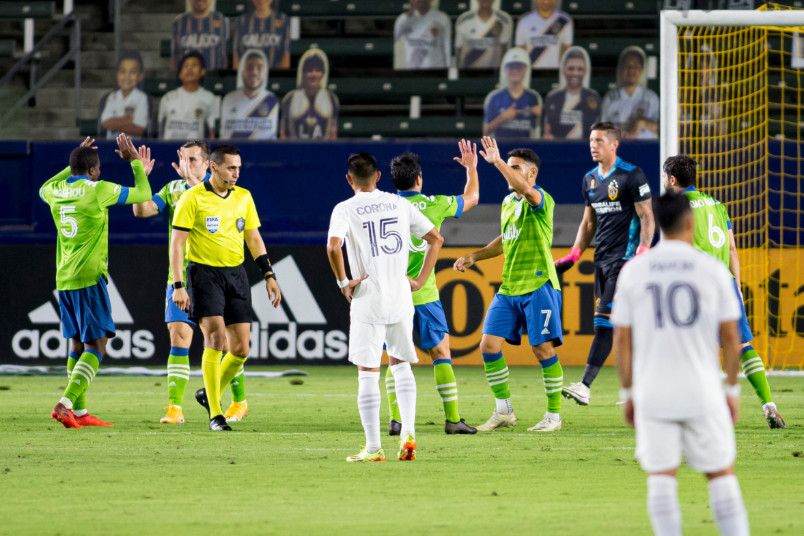 Los Angeles is not necessarily a sports town, but this city is certainly crazy about the Lakers and Dodgers. The Lakers will open the NBA Finals, and the Dodgers will begin their own quest to reach the championship. Both games will begin within one hour of each other.

Both the LA Galaxy and Los Angeles Football Club have competed hard on the field this year. Their biggest struggle continues to be against those other Los Angeles sports monsters. Los Angeles loves winners. As a sports town, LA is about collecting trophies.

All eyes in Los Angeles will either be on the Lakers or the Dodgers, or both, and it could be that way for quite some time. This presents major challenges for the Galaxy and LAFC. To even have a chance in that type of marketplace, they have to contend for MLS Cup.

LA is an unforgiving town. Under the best of circumstances, losing teams are ignored and all but forgotten. Now, the Galaxy and LAFC face greater challenges. Playing in empty stadiums further isolates the soccer teams. It brings down the buzz surrounding those teams, more so with the LAFC and its hot-ticket status. The Lakers may be in an Orlando bubble and the World Series is set for Dallas regardless of who advances. Neither of those things makes it easier for the Galaxy and LAFC.

The only hope the LA Galaxy and LAFC have of not falling into LA sports oblivion is to find success on the field. The way both teams are playing, a black hole of obscurity awaits at the end of the season.

All towns love winners and championships, but by nature, that is part of Los Angeles’ fiber. The glitz and glamour of Hollywood and the ever-present search for the next big thing exists. This area has always been a magnet for entertainment outside of the television and movie industry, with theme parks, world-class cuisine, and outdoor recreational activities part of the landscape in the area.

Sports teams have always faced those challenges. They compete not only against teams in their sports but against Hollywood and Disneyland. With the Covid-19 pandemic shuttering theme parks, restaurants, and stadiums, the in-person market has changed. That leaves the TV product.

Nobody likes to watch teams lose. No casual fan will watch an LA sports team get drubbed and continue tuning in to watch the same thing happen over and over. That is true in and of itself, but even more so when there are other local teams in contention.

It’s hard to call any Lakers fan long-suffering. The Dodgers, on the other hand, last won the World Series in 1988. Coming close in 2017 and ’18 ended in heartbreak. Dodger fans are all but demanding a championship this year. With the club carrying the best record in baseball during this shortened season, delivering a title is now a responsibility.

The Lakers meanwhile last won a championship in 2010. That might not seem like much, but the longest the Lakers have gone without winning an NBA title since moving to Los Angeles in 1972 has been 12 years. In Lakers logic, they’ve gone far too long without a trophy celebration.

How can either the LA Galaxy or LAFC hope to compete against that with the way the teams are playing this year? The Galaxy lost its third consecutive match on Sunday, falling 3-1 to reigning champions Seattle. The Sounders outclassed them in all facets of the game. Whatever progress the Galaxy made in its six-match unbeaten run has seemingly fallen apart. The Galaxy sits in 11th-place in the Western Conference.

Meanwhile, LAFC looked like it had turned things around against Vancouver on September 16, winning 6-0. They held a 1-0 lead against San Jose on Sunday before the world came crashing down. San Jose scored two late goals to steal three points from LAFC at Banc of California Stadium. The only thing that kept the loss from truly stinging was that there were no fans there to witness it firsthand. With local games relegated to a streaming subscription service and an obscure local Spanish-language over-the-air channel, likely even fewer people watched it happen.

LAFC is in 6th-place in the Western Conference on 19 points, but that is far from a comfortable spot. More blown leads against teams like San Jose could see LAFC fall out of the playoff picture altogether.

The Galaxy and LAFC have one more match left against one another on October 25. That’s also the date for a potential Game 5 of the World Series. If both LA teams cannot get their acts together and the Dodgers are playing in the Fall Classic, few in LA will care about the soccer game.