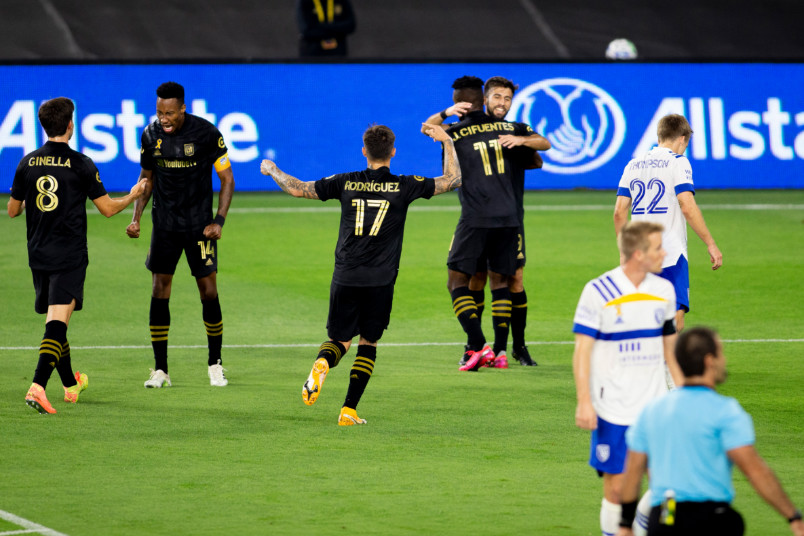 By Charles Boehm – WASHINGTON, DC (Sep 3, 2020) US Soccer Players – In a 2020 already marked by a range of unpleasant global events, Northern California may feel more apocalyptic than most places in North America. Searing heat waves and serious wildfires are exacerbating the ravages of COVID-19 and sustained economic and socio-political angst.

The San Jose Earthquakes are among those affected by all this. On top of the issues with the pandemic, the club has had to adjust training schedules due to the harsh realities of “smoke” becoming a regular feature of daily weather conditions in their region. Atmospheric conditions like that sound oddly familiar. Experts recommend limited time outdoors and N95 face masks.

On the field, the Quakes have issues. Wednesday brought their latest setback, a 5-1 road shellacking at the hands of LAFC. It’s San Jose’s second straight loss, dropping them to 11th-place in the 12-team Western Conference.

Wednesday’s rout and last weekend’s 3-2 loss to the LA Galaxy make for a jarring comedown after the club’s good work at the MLS is Back Tournament. The Quakes mounted a stirring run to the quarterfinals in Orlando despite spending more time in the bubble than most, thanks to an early arrival necessitated by COVID-imposed restrictions on their ability to train back home.

As eager as most teams were to escape the monotony of that “soccer island” environment, San Jose head coach Matias Almeyda sounded downright nostalgic for it after the loss to LAFC.

“For this team to be competitive, it has to play at 200% concentration and commitment and to have the same spirit to play the way they did in Orlando, where we lived for 40 days with passion and love,” Almeyda said. “There is a short amount of time to work and correct mistakes. And from here until the end of the season will be a difficult period.”

When things work well for his side, they’re a blast to watch. They circulate the ball well and take compelling risks, passing and moving to disorganize opponents and pushing the tempo at all times. Conversely, their defending ranges from white-knuckle to downright chaotic. Lately, it’s been way too risky.

The Quakes have now conceded an MLS-worst 18 goals in seven matches. They’ve leaked five in a game twice this season, letting in three each in games against Vancouver and the Galaxy. Goalkeeper Daniel Vega has now posted almost as many goals against (18) as he has saves (25) and his 2.57 GAA is safely the highest among MLS starters. That’s not counting the six given up in knockout round games at MLS is Back. Starting center backs Oswaldo Alanis and Guram Kashia are currently out injured, and perhaps the presence of lopsided scorelines is part and parcel of their run-and-run style. Still, these numbers are alarming.

Questions aplenty swirl around Almeyda’s team. Has the rest of the league figured out how to beat his quirky man-marking defensive system? Does it simply demand too much physical output from his relatively thin squad? Is he unable or unwilling to roll out a Plan B when it’s not working? The former Chivas Guadalajara boss is something of a philosopher coach and an undoubtedly inspiring character. Have his psychological tactics reached the limit of their effectiveness?

From there, it’s not hard to ask about the organization as a whole. Almeyda’s hiring nearly two years ago was a coup for San Jose. They showed long-overdue ambition and investment after a string of mostly pedestrian and occasionally dreadful seasons and strategies. Even when results went against them, Almeyda’s Quakes have been relevant and interesting thanks to him.

That’s no insignificant thing, especially for MLS headquarters. The Earthquakes are often cited as sleeping giants considering the size and wealth of their Northern Californaia market and their ownership group’s apparent hesitation to move beyond the risk-averse norms of the league’s recent past. MLS would seem to be leaving plenty of money on the table by not having a bigger and bolder presence in the Bay Area, so Almeyda made for a plotline to watch on multiple levels.

The general perception around the league is that San Jose’s roster is light on both difference-making talent and dependable MLS contributors. The front office has made a few moves to upgrade Almeyda’s options, securing the services of Alanis, Cristian Espinoza, Carlos Fierro, and Andres Rios. Yet the only transaction in the current transfer window thus far has been the departure of starter Magnus Eriksson for Djurgardens in his native Sweden.

Reinforcements would appear a necessity under the current circumstances. That said, it’s not entirely clear how far the Quakes’ investor/operators are willing to go to rise from “competitive” to “contenders” in the stacked West. Nor have they vanquished the suspicion that Almeyda’s leadership and personality is there to overshadow up a bare-bones side rather than the foundation of a sustained push into the MLS aristocracy.

“We’re looking at some possibilities on strengthening our team, but first I need to really analyze what I currently have,” said the coach on Wednesday, not exactly sounding like someone poised to pull the trigger on impactful deals. “I have worked and played football in various parts of the world, and the easiest result a coach can say is, ‘change my 11 players and bring me 11 new ones.’”

Concacaf’s 2018 Coach of the Year has spoken of his desire to stay by the Bay. That would run alongside the longer-term project of cranking up a Homegrown pipeline. That’s a happy scenario for Quakes fans when first-team performances look like they did in Orlando. It’s something less inspiring when they’re coughing up goals by the bushel and competing with an outgunned roster.