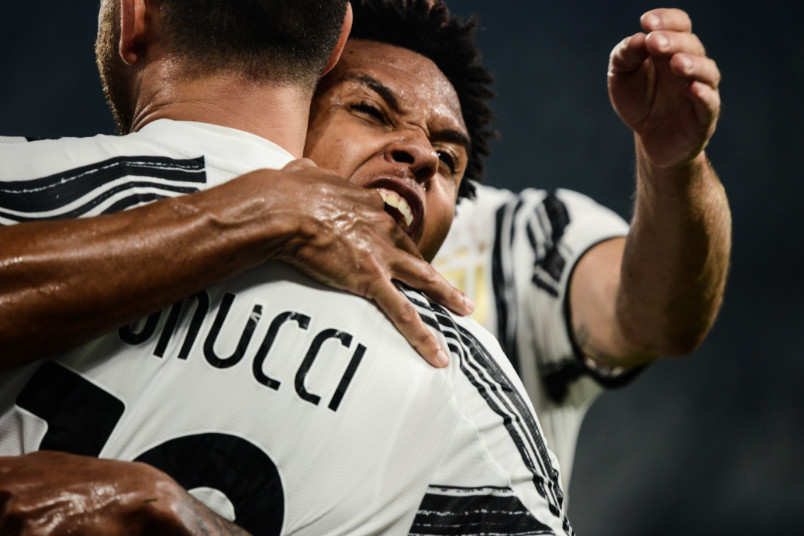 The roundup of USMNT players in Europe and Mexico starts in Serie A. Weston McKennie made his league debut for his new club Juventus, shutting out Sampdoria 3-0 at home. Dejan Kulusevski scored in the 13th minute with Leonardo Bonucci doubling the lea in the 78th. Cristiano Ronaldo finished off the goals in the 88th.

“McKennie arrived with a few more days of preparation and did well,” Juventus coach Andrea Pirlo said. “He made a mistake in the setting phase but it was the first and you can forgive.”

Lynden Gooch scored in Sunderland’s 2-0 win at Oxford United in League One. Luke O’Nien opened the scoring in the 47th. Gooch doubled the lead in the 82nd. In the Championship, Geoff Cameron’s QPR lost 3-2 at Coventry City. Lyndon Dykes converted a 41st minute penalty to put QPR up. Coventry equalized in the 44th and went ahead in the 50th. Yoann Barbet equalized for QPR in the 75th. Coventry scored in the 84th.

Josh Sargent’s Werder Bremen lost 4-1 at home to Hertha BSC in the Bundesliga. Down 3-0 from goals in the 42nd, first-half stoppage time, and the 62nd, Davie Selke scored for Werder in the 69th. Hertha added a goal in the 90th minute.

Timmy Chandler subbed on in the 88th minute of Eintracht’s 1-1 home draw with Arminia Bielefeld. Falling behind in the 51st minute, Andre Silva equalized for Eintracht in the 62nd. Tyler Adams’s RB Leipzig beat Mainz 3-1 at home. Emil Forsberg converted a 17th minute penalty with Yussuf Poulsen doubling the Leipzig lead in the 21st. Mainz pulled a goal back in the 48th. RB Leipzig went up for good in the 51st with a goal from Amadou Haidara. John Brooks’s Wolfsburg drew 0-0 with Bayer Leverkusen at home.

Alfredo Morales subbed out in the 62nd minute of Fortuna Dusseldorf’s 2-1 loss at Hamburg in the 2.Bundesliga. Trailing from goals in first-half stoppage time and the 60th minute, Fortuna went a man down with a red card to Nana Opoku Ampomah in the 90th minute. Matthias Zimmermann scored for Fortuna three minutes into stoppage time. Julian Green’s Furth drew 1-1 at home with Osnabruck. Paul Seguin put Furth up in the 15th minute with Osnabruck equalizing in the 26th.

Reggie Cannon’s Boavista drew 3-3 at Nacional. Gustavo Sauer put Boavista up in the 19th minute with Nacional equalizing in the 28th. Trailing from a 36th minute goal, Sauer equalized in the 60th. Nacional went up for good two minutes into stoppage time. Erik Palmer-Brown’s Austria Wien beat Reid 2-1 in the Austrian Bundesliga. Christoph Monschein converted penalties in the 37th and 65th minutes. Reid pulled a goal back in the 89th. Timothy Weah subbed on in the 78th minute of Lille’s 1-1 draw at Marseille in Ligue 1. Luiz Araujo scored for Lille in the 47th with Marseille equalizing in the 85th minute.

In the Allsvenskan, Aron Johannsson’s Hammarby lost 3-0 at AIK to goals in the 27th, 37th, and 77th minutes. Kenny Saief subbed out in the 75th minute of Lechia Gdansk’s 4-2 home win over Stal. Flavio Piaxao opened the scoring in the 4th minute with Stal equalizing in the 23rd and going ahead in the 45th. Conrado Holz equalized for Lechia two minutes into stoppage time. Paixao converted a 73rd minute penalty with Michal Nalepa scoring in the 88th.

Sergino Dest subbed on in the 79th minute of Ajax’s 3-0 home win over Waalwijk. Dusan Tadic opened the scoring in the 10th minute with Zakaria Labyad doubling the lead in the 34th. Ajax went a man up in the 68th, with Lisandro Martinez scoring in the 73rd. Luca De La Torre subbed out in the 58th minute of Heracles’s 4-0 loss at Willem II.

Tyler Boyd’s Besiktas drew 1-1 at home with Antalyaspor in the Super Liga. Cyle Larin scored for Besiktas in the 33rd minute with Antalyaspor equalizing in the 85th. Eric Lichaj subbed on in the 61st minute of Fatih Karagumruk’s 2-2 draw at Gaziantep. Ervin Zukanovic put Fati Karagumruk up in the 26th. Gaziantep equalized in the 53rd and went up a goal in the 59th. Mevlut Erdinc equalized for Fatih Karagumruk five minutes into stoppage time.

Shaq Moore’s Tenerife lost 2-0 at Alcorcon in the Segunda Division. Alcorcon scored in the 74th and 84th minutes. Mix Diskerud’s Helsingborg beat Varbergs 3-1 away on Monday. Trailing from the 12th minute, Alex Andersson equalized in the 41st with Anthony can der Hurk converting a penalty in first-half stoppage time. Rasmus Jonsson finished off the Helsingborg goals in the 81st minute. Diskerud saw yellow in the 63rd.