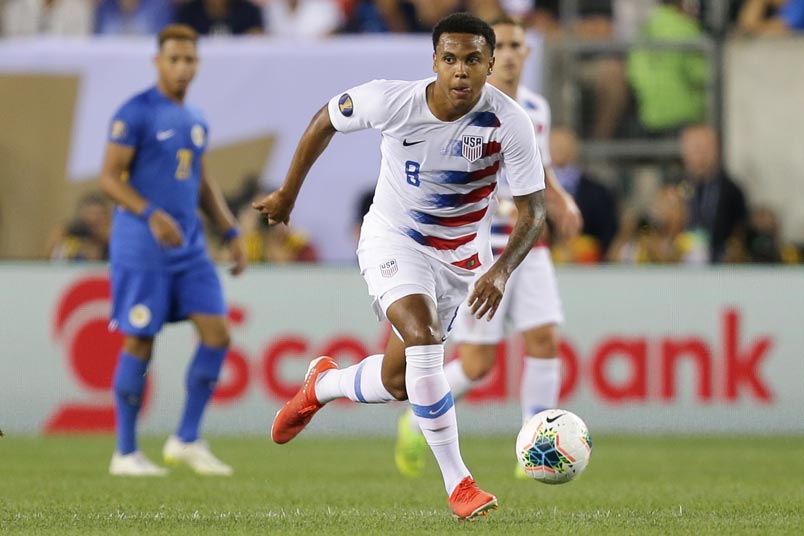 By Jason Davis – WASHINGTON, DC (Sep 9, 2020) US Soccer Players – As is always the case with these things, it’s best to wait until it’s official. There’s no point in jumping ahead and getting excited until everything is official. These things have a history of falling apart at the minute.

The world of big-time soccer transfers is a cauldron of intrigue. It’s often hard to separate fact from fiction. It’s best to wait until the old club issues a “goodbye and good luck” message while the new one gets excited on social media.

Ask Manchester City fans how it feels to have everyone talking about your club as the new home of one of the best players in the history of the game, only to see it not happen. Before you know it, the player is sitting in shorts and slides talking about why he’s now not leaving the only club he’s ever known for a new adventure somewhere else.

Then there are the moments where the odd rumor picks up. All of a sudden, a player is making that ridiculous move. To put that another way, it’s now official. Weston McKennie is a member of Juventus Football Club. An American now plays for the biggest club in Italy and one of Europe’s elites.

In July, Juventus won Serie A for the ninth time running and 36th title overall. The idea of anyone catching Juventus is almost laughable at this point. That’s because the club maintains its talent advantage via big spending while the rest of Serie A maintains a decidedly different financial existence.

McKennie’s arrival in Turin came with the requisite social media hits, including a video in which the American midfielder got a first look at Juventus’s trophy room. Yes, that’s “room”, as in a large space filled with trophies. Most clubs barely need a trophy case. Juventus’s space would fetch $3000 a month on the New York apartment market, and it probably has better views.

This is why McKennie’s surprise move to Turin is such a massive thing for the player and his home country. McKennie is taking a dramatic step up in level. He joins a club that expects nothing less than to win multiple domestic trophies and compete for the most celebrated silverware in the sport, the Champions League.

McKennie’s growth as a young player in Germany happened in one of the best leagues in the world. Still, he never faced the kind of week-to-week scrutiny that comes with playing for a club as predominant as the Italian giants. McKennie’s transfer to Juventus cuts two ways for the 22-year-old. It’s both a daunting push into the unknown and a validation of his ability.

Juventus is not in the business of counting pennies. It doesn’t sign on players it doesn’t think can do the job. Simply by acquiring McKennie, Juventus is vouching for him.

With apologies to Christian Pulisic, who remains the most expensive American player in history following his transfer to Chelsea, McKennie joining Juventus is a new high watermark for players from the United States in Europe. Chelsea is ambitious but doesn’t have the pedigree of Juventus. Manchester United does and certainly did when Tim Howard jumped from Major League Soccer to the Premier League. American goalkeepers were well established in Europe at that point. In our bizarre section of the sport, it’s the field players who are different.

There are plenty of unknowns about McKennie’s fit at Juventus and plenty of reasons to worry. That puts him in the same situation as many of his talented peers from soccer-rich cultures on the Continent and in South America.

American soccer’s ceiling exists in many forms. Coaching remains a difficult area for Americans, though Jesse Marsch is forging a path that could lead to greater respect. Sometimes it takes just one example to open the minds of the soccer elite. We might be looking at a future with much more American influence at the highest levels.

It’s fair to think, however, that American players have to achieve at the game’s top tier before the rest will follow. The last two decades saw Americans make inroads into Europe’s top leagues. Several standout performers emerged as the standard-bearers for the first truly professional generation of players developed in the United States.

Few of those players did their work at Champions League level clubs in the top five leagues, however. We’re talking about exceptions. Tyler Adams this season with Leipzig. DaMarcus Beasley with PSV back in the 2000s. Jovan Kirovski ‘s winning run with Borussia Dortmund in 1997. All of those were surprises.

To put it more simply, Juventus is part of an ultra-elite group of clubs that have the resources and history to claim to be among the top 15 or 20 on the planet. Like Pulisic before him, McKennie is now in rarified air. If he succeeds, the impact will be immense.

Serie A might not be the most popular foreign league in America, but everyone knows about Juventus. That was true before Cristiano Ronaldo left Real Madrid to join the Italian giants, but the club’s visibility is even higher now. For that reason, it’s hard to imagine Juventus signed McKennie because of some desire to “grow” the club’s reach in the United States. McKennie isn’t a big enough name yet to have that sort of effect.

Joining Juventus will raise his profile, however. Though McKennie isn’t the Sportscenter-ready attacking star that Pulisic is, his appearances on the field for his new club will garner attention from otherwise soccer-agnostic corners. There’s nothing more Americans like to do than wave the flag, and McKennie allows sports fans whether they care about soccer or not to do that.

Juventus’s move for McKennie likely came down to a host of factors: availability, price, age, skillset, etc. Some of those could be spun to undermine the American’s talent and explain away his signing as a budget-minded move by a big club trying to maneuver its way around UEFA’s Financial Fair Play regulations. Even if there’s something to that theory, it hardly matters. McKennie is still at Juventus, and Juventus will still expect to lift trophies in 2021. It’s official, and it’s a really, really big deal.