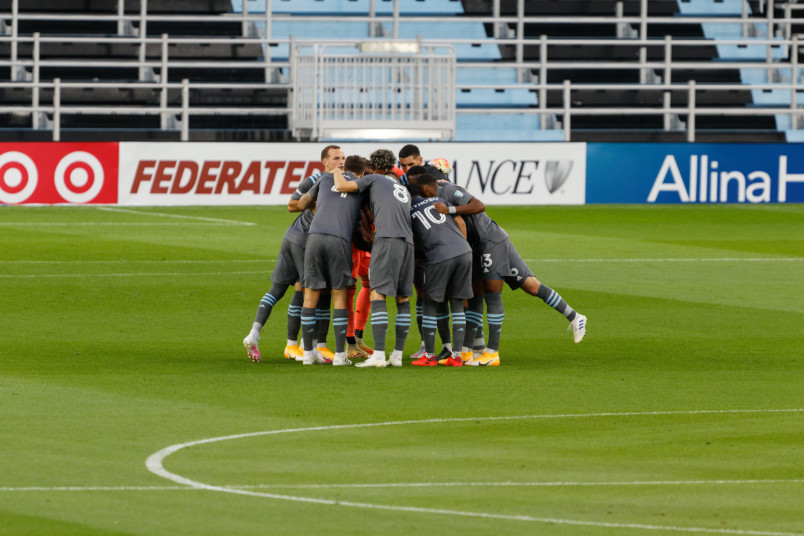 The MLS roundup starts with Houston coming back to beat Sporting Kansas City 2-1 at home. Erik Hurtado put Sporting up in the 30th minute. Alberth Elis equalized for the Dynamo in the 59th with Mauro Manotas scoring in the 85th minute. Darwin Quintero had the second assist on both Houston goals.

“What I can say about tonight’s game is that it was a really difficult one,” Houston coach Tab Ramos said. “Today, we really fought to earn the three points. I think this is one of those wins that you use to build the future of the club. That’s how I see it. It took a lot of character and a lot of fight today. They’ll be a lot of ups and downs as the season goes on, but we can always look back on this one and how we fought to come back for this one. It’s a big one.”

Orlando and Atlanta finished 1-1. Benji Michel scored for City in first-half stoppage time with United equalizing two minutes into stoppage time. Atlanta had the lead on shots on goal with 6 to Orlando’s 4.

“I think without getting too deep into it that 2020 has been a year with a lot of adversity,” Atlanta midfielder Jeff Larentowicz said. “We’ve had a lot of stop-start. We’ve obviously had a coaching change. Now a player like Pity Martinez no longer in our team. We lost Josef (Martinez) at the beginning of the year. I feel like we’ve taken a lot of punches this year and it’s been tough. But I think we are learning about each other. I think we have shown that we are willing to fight for each other.”

Vancouver beat Toronto 3-2 at BC Place. Lucas Cavallini scored Vancouver’s opening goal in the 17th minute with Jonathan Osorio equalizing in the 25th. Michael Baldismo made it 2-1 Whitecaps in the 57th. Alejandro Pozuelo assisted on the Osorio goal, scoring an equalizer of his own in the 71st minute. Jake Nerwinski scored Vancouver’s winner in the 76th minute.

San Jose and Colorado drew 1-1 at Earthquakes Stadium. Chris Wondolowski converted a 59th minute penalty with Kei Kamara equalizing in the 81st. The Rapids had the edge on shots on goal 6 to 3.

“We prepared differently because we had little time to train,” San Jose coach Matias Almeyda said. “Little by little, the team is picking up the rhythm again. We started training as a team where everyone has the opportunity to play. Today we saw a different team compared to the other games. Where we have to improve ourselves is set pieces, but when you have a player like Kamara who jumps more than two meters, it may be that he beats you.”

DC United and NYCFC finished scoreless at Audi Field. DC finished without taking a shot. NYCFC put 4 of their 19 shots on goal.

Philadelphia shutout the Red Bulls 3-0 on the road. Brenden Aaronson kept his run of form going with a goal in the 36th minute. Kacper Przybylko doubled the lead in the 68th with Alejandro Bedoya and Andrew Wooten assisting on both goals. Matt Real finished off the goals in the 78th minute. Andre Blake didn’t need a save to keep the clean sheet.

New England beat Chicago 2-1 at Soldier Field. Teal Bunbury scored for the Revs in the 3rd minute with Fabian Herbers equalizing in the 22nd. Bunbury scored again in the 54th minute.

“We didn’t win any beauty contests tonight, but it was a great collective effort by the team,” New England coach Bruce Arena said. “We played 16 players. They all contributed on a day that wasn’t easy with the travel in, and the field conditions were challenging with a field that wasn’t cut. It was a slow field and it made for a lot of battles on the field, and we were up to the task.”

Columbus shutout Cincinnati 3-0 at home. Pedro Santos opened the scoring in the 52nd and assisted on Gyasi Zardes’s goal in the 64th. Zardes scored again in the 71st minute. Cree goalkeeper Eloy Room didn’t need a save to keep the clean sheet.

Minnesota beat Real Salt Lake 4-0 at Allianz Field. Chase Gasper started the scoring in the 53rd minute with Robin Lod adding a goal in the 62nd. Jacori Hayes made it 3-0 in the 75th with Lod scoring again in the 90th. Dayne St Clair made three saves for the shutout.

After waiting out a weather delay, Inter Miami and Nashville finished scoreless in Fort Lauderdale. Miami had the edge on shots on goal 5 to 4.

Portland beat Seattle 2-1 on the road. Eryk Williamson put Portland up in the 9th minute with Kelvin Leerdam equalizing in the 41st. Williamson assisted on Felipe Mora’s goal in the 83rd minute.

The Galaxy got the better of LAFC, winning 3-0 at home. Cristian Pavon opened the scoring in the 51st. the Galaxy went a man up two minutes later when Mark-Anthony Kaye saw red for a serious foul. Sebastian Lletget took advantage, scoring in the 73rd and 83rd minutes. Galaxy goalkeeper David Bingham made seven saves to keep the clean sheet.