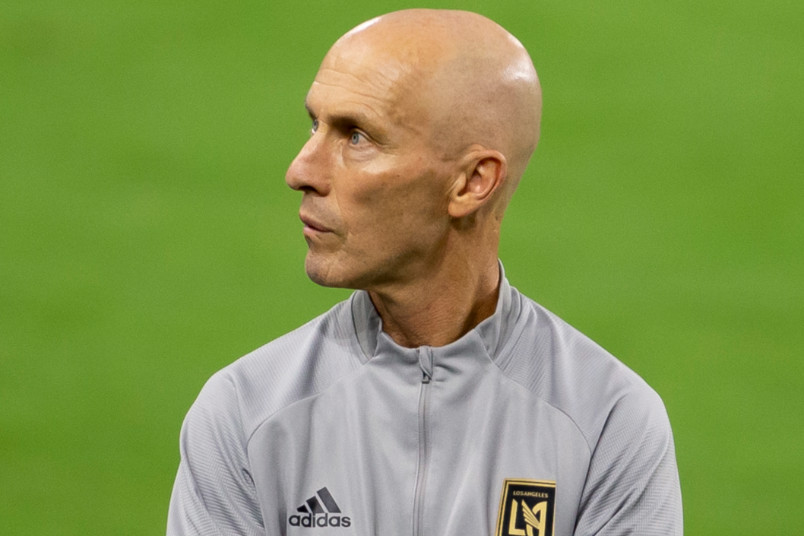 By Jason Davis – WASHINGTON, DC (Sep 11, 2020) US Soccer Players – Another MLS coach is under fire. Following the dismissals of Frank de Boer at Atlanta United and Chris Armas of the New York Red Bulls, someone had to be the next on the hot seat. As long as their are games on the schedule, there’s a coach or two in trouble.

Still, the coach currently shouldering the criticism in Major League Soccer is a surprise. The amount of goodwill he carried forward from the last two MLS seasons made the idea of his dismissal wildly ridiculous. That hasn’t changed, even with his club dropping points and teetering on the edge of the Western Conference playoff picture.

The man is Bob Bradley. The club is LAFC. Before you even say it, yes, it’s crazy to imagine the third-year MLS franchise, one that set records for points and goal differential in 2019 and won the Supporters’ Shield, parting ways with the architect of its unique brand of soccer.

Whether the LAFC brass is considering a change is beside the point, because there’s very little chance that’s even a thought at LAFC Stadium. Instead, it’s worth looking at the fan response to the recent LAFC swoon and pondering where the bar is for the club.

First, the case for questioning Bradley’s leadership, to both establish the record and contextualize the “movement” call for his firing.

Since returning to play following a quarterfinal exit at MLS is Back, Bradley’s club is 1-4-0 with a -5 goal differential. The defense has been particularly poor, conceding 12 goals in the four games since resuming the regular season. If any of this is Bradley’s fault, we have to make sure to do him justice by pointing out some of the difficulties he’s faced since play restarted first in Orlando and now in Phase 1 of the regular season.

In both cases, the absence of superstar Carlos Vela looms large. The reigning MLS MVP opted out of play in Florida due to his wife’s pregnancy. Following Vela’s return to the squad once “regular” play resumed against the Galaxy on August 22, LAFC’s lead attacker suffered an MCL injury.

Vela’s status remains week-to-week, ostensibly putting him out for the foreseeable future. Vela shouldn’t miss too much more of the season if his knee improves on the usual timeline for a second-degree sprain, but LAFC is still left to fend without him.

In Orlando, the lack of Vela’s influence prompted Diego Rossi to step into his shoes as the main threat in the attack. That served Bradley relatively well on the score sheet, with Rossi putting in seven MLS Is Back goals for the Golden Boot.

Things haven’t been as easy since. Vela exited that first match, a 2-0 loss to the Galaxy, in the 57th minute. If not for a five-goal explosion against a woeful San Jose Earthquakes side sandwiched between two-game losing streaks, the LAFC attack would hardly look league-average.

On the defensive end, the win over the Quakes is the only game since the move back to home markets that saw LAFC hold an opponent to fewer than two goals. In three of its five matches, Bradley’s team has conceded three goals with two of those losses coming against the Galaxy.

It’s not Vela’s absence that’s the problem. It’s the loss of midfielder Eduard Atuesta that looms largest. Atuesta’s foot injury forced Bradley to adjust in the middle of the field as well, deputizing new faces in the place of a consistent performer.

Part of why any thought of Bradley’s job being in jeopardy rings hollow. In addition to the credit he built putting together a transcendent regular season in 2019, it’s highly unlikely LAFC will play itself out of the playoff picture.

Major League Soccer’s decision to expand the playoff field to eight in the West means only the dregs of the division will miss out. LAFC has more than enough talent to feel confident of its chances of being in that set of teams by the regular season’s end.

That might be why Bradley decided to roll out a heavily rotated lineup against Real Salt Lake even with a humbling 3-0 loss to the Galaxy hanging over his head. Not only does he need to manage minutes for his first choice group in the middle of a congested part of the schedule, he knows he has some freedom to tinker. That tinkering might pay off down the line if there are further injuries.

Losing 3-0 to RSL on Wednesday night did Bradley no favors, but let’s be clear. It’s the back-to-back losses to the Galaxy post-Orlando that are most galling to the LAFC fan base. Bradley is playing it cool, refusing to be overly negative about this run, choosing instead to remain circumspect about problems no one could have foreseen.

“We’re in a period where it’s well below our standards,” Bradley said. “And there’s only one thing we can do: We have to play ourselves out of it. We’ve had discussions, we’ve had moments where we felt it was going in a good direction, but to a man right now we have to embrace that as good a team as we’ve been, as much as we’ve had some really good games not that long ago, with everything going on right now, we’ve lost our way.”

LAFC is learning what Atlanta already knows. It’s extremely difficult to remain on top in a league built for parity. LAFC’s talent might outstrip much of MLS, but the margins remain slim. Lose a player here or there or find yourself unable to shift the approach, and you’re likely to find yourself suffering through a humbling run of bad results. LAFC fans don’t know any better. Almost since the day the club entered the league, it’s been among a handful of elite teams.

LAFC played exciting soccer and won games. Neither is happening now. The defeats aren’t narrow enough to explain away as bad luck. There’s plenty of reason to believe it will turn around, but it would be wrong to dismiss fan discontent out of hand.

Bradley’s not going anywhere. LAFC will improve. Maintaining the standard the club set last year was impossible. The regression was always coming.

Nothing lasts forever. For some LAFC fans, calling for Bradley’s ouster is a matter of accountability. Instead, this is MLS where the spoiled always get humbled.