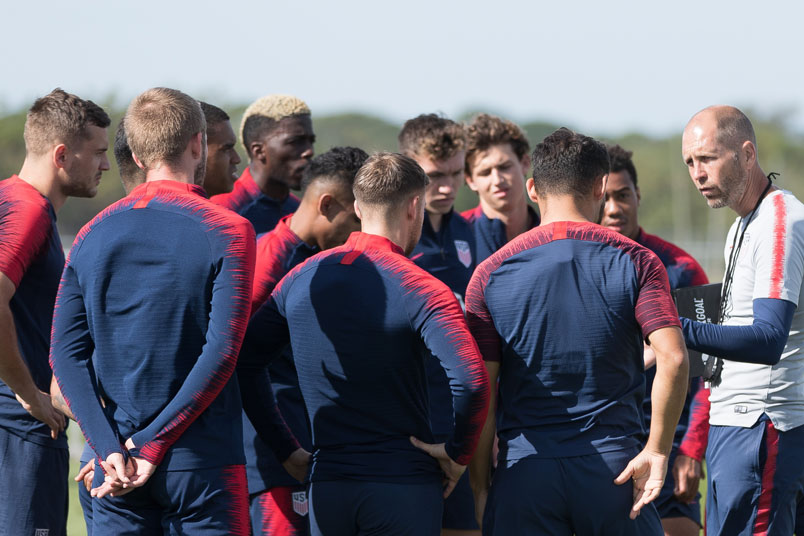 By Charles Boehm – WASHINGTON, DC (Oct 1, 2020) US Soccer Players – The USMNT is off again this month, forced by the continuing COVID-19 crisis to scratch any plans of a camp or friendly matches during the October international window. Even without a team gathering, however, this period might turn out to be a significant pivot point for the program.

Over the past few weeks, Weston McKennie has sealed a massive move to Juventus and stepped straight into their starting XI. Sergino Dest joined Konrad de la Fuente at FC Barcelona in a $25 million deal. Reggie Cannon ventured abroad with a transfer to Boavista. Zack Steffen earned his first two starts for Manchester City. Young American players are getting opportunities across MLS. Many are seizing them, including Brenden Aaronson, widely reported to be bound for Jesse Marsch’s RB Salzburg come winter.

This points to the thrilling trend of US players playing at clubs that were just a dream for most of their predecessors, and making such moves at younger ages than ever before. At long last, it seems clear that USMNT supporters have more to be excited about than to stew over. The dark clouds of frustration that have hovered over segments of the fanbase for the past three years could be clearing.

Speaking of qualifying, USMNT Gregg Berhalter may need every ounce of quality and every able-bodied player he can get a US uniform in as it becomes clear just how seriously hectic, and pivotal 2021 will be.

This week the USMNT learned their group stage assignment for next summer’s Gold Cup as Concacaf held the draw for the tournament. In such tumultuous times, that event is still so far away that it almost feels more like an abstraction than a reality. It’s one of several pressing priorities awaiting the squad in what might be the most jam-packed year in the modern era, even as the instability injected by the coronavirus pandemic lingers.

So that’s two trophies up for grabs, plus possibly the Olympics, and the absolutely crucial start of 2022 qualifying. All this will unfold while leagues try to get the games in as they hopefully return to normal.

Past predecents suggest that it will again be difficult to convince clubs to release players beyond the bare minimums required by FIFA regulations. That’s been a recurring issue for US U-23 coaches over the years, and such will almost surely be the case this time for Jason Kreis. It figures to grow trickier now that the club-country tug-of-war threatens to erupt into outright battle over this month’s mandatory UEFA and CONMEBOL call-ups in the midst of a global pandemic.

“There are a lot of competitions, and what that means is that it’s an opportunity for players,” Berhalter told reporters after the Gold Cup draw. “It’s an opportunity for them to show they belong, that they should be part of the first team. No matter what competition we’re in, every time the players step on the field they prove that they can wear the jersey, that they can be part of the group, the squad, whatever that may be.”

With so many talented youngsters gaining real first-team minutes and competing at top clubs, Berhalter and Kreis’s player pools overlap significantly, perhaps more than ever before. The combined coaching staffs basically have a 1,000-piece jigsaw puzzle scattered before them as they try to compete on multiple fronts without exhausting their players or their relationships with clubs.

Concacaf qualification would usually already be well underway by now. At this approximate point in the 2018 cycle, the USMNT was in the midst of their semifinal-round group-stage campaign vs Guatemala, St Vincent & the Grenadines, and Trinidad & Tobago. COVID’s delays are packing more key games into a smaller period. That cranks up already enormous levels of pressure and intensity.

Some see the rising crops of young US talent as proof of a golden generation taking the stage. If that proves to be accurate at all, it may be arriving not a moment too soon.