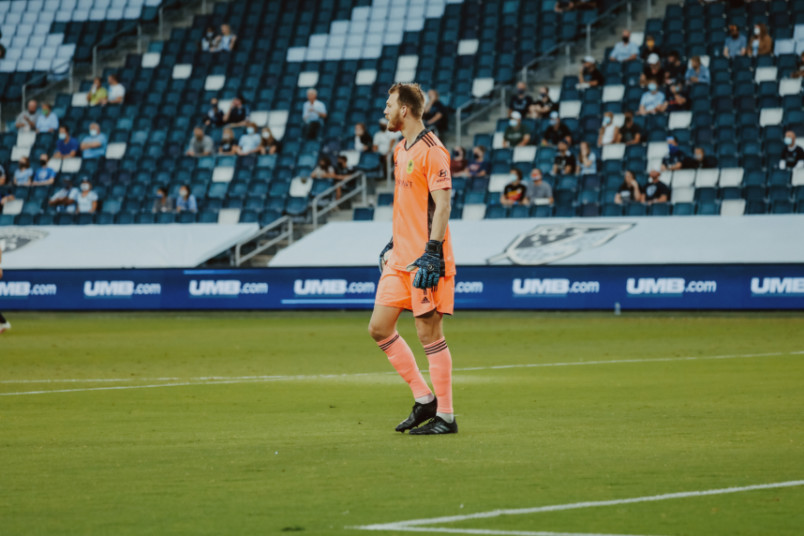 Monday’s soccer news starts with the MLS roundup. Once again, Colorado was unable to play due to positive coronavirus tests, postponing their game with the Galaxy. On the field, Inter Miami shutout Houston 1-0 in Fort Lauderdale. Lewis Morgan converted a 57th minute penalty for the game’s only goal. Inter goalkeeper John McCarthy made two saves to keep the clean sheet.

The Red Bulls shutout Atlanta 1-0 at Mercedes-Benz Arena. Caden Clark scored in the 47th minute with Ryan Meara making one save to keep the clean sheet.

“Let me ask you a question,” Atlanta midfielder Jeff Larentoqicz said. “The referee said, ‘yes he’s offside.’ He moved his body to get out of the way of the ball. As the ball is traveling toward the goal, does Brad know (Royer) is offside? Probably not. What happens if Royer doesn’t move his body? Does the ball hit him? The ref said he doesn’t make a play on the ball. In that moment, can Brad know that he’s offside and say, ‘oh well I have to save the original shot and Royer is offside?’ Ref said he’s offside. I think Jair [Marrufo] is one of the best ref’s in the league. I think Alan Kelly is probably the best ref in the league and he was the VAR. But I think they get it wrong.”

Vancouver came back to beat Real Salt Lake 2-1 at their temporary home in Portland. Damir Kreilach put RSL up in the 37th minute with an own-goal leveling the score in the 71st. Lucas Cavallini scored Vancouver’s winner in the 75th minute.

New England won 2-1 at NYCFC. Teal Bunbury scored for the Revolution in the 3rd minute and Lee Nguyen converted a penalty in the 80th. Alexander Callens pulled a goal back for New York three minutes into stoppage time.

“We were talking about getting the first foul, first goal and really wanted to take it to them,” Bunbury said. “We know it’s a tough place to play here at Yankee Stadium so I think that was huge for our morale and it’s also tough once you get that lead that early to stick with it for a full 90 minutes plus but I’m really happy and proud of the way we played tonight. We worked for each other, it was a battle. I think we got stuck in some tackles, weren’t easy to play against. There’s still some things to work on but coming in here and we’ve been talking about these six point swings so this was huge for us.”

LAFC beat Seattle 3-1 at home. Danny Musovski opened the scoring for LA in the 15th minute and assisted on Francisco Ginella’s goal in the 65th. Nicolas Lodeiro scored for the Sounders in the 77th minute. Musovski scored again in the 84th.

DC lost its first game under interim coach Chad Ashton, 2-1 at Chicago. CJ Sapong put the Fire up in the 3rd with Boris Sekulic doubling the lead in first-half stoppage time. Alvaro Medran assisted on both goals. Chicago gave up an own-goal in the 56th minute.

“For me it’s a personal achievement to be able to come in, to start after I have not started for a while,” Sapong said. “That goal was, I think, just a testament to the work that I have put in. I do have a lot of things going on and soccer is my escape, my channel to happiness. Whenever you can, you know, achieve something personally but then also provide an impact for your team is always a good feeling.”

Toronto qualified for the playoffs by shutting out Cincinnati 1-0 at Nippert Stadium. Patrick Mullins scored in the 29th minute and Quentin Westberg made one save to keep the clean sheet.

Sporting Kansas City came back to beat Nashville 2-1 at home. Walker Zimmerman scored for Nashville in the 15th minute with Gerso equalizing in the 53rd. Sporting went a man up in the 54th when Alistair Johnston picked up a second yellow for unsporting behavior. Erik Hurtado scored for Sporting in the 79th minute.

Philadelphia beat Montreal 2-1 at home. Jaime Moreno opened the scoring in the 39th minute with Sergio Santos making it 2-1 Union in the 48th. Ilsinho assisted on both goals. Amar Sejdic scored for the Impact in the 65th minute.

The weekend schedule ended at Providence Park with Portland shutting out San Jose 3-0. Jaroslaw Niezgoda put the Timbers up in the 46th and made it 2-0 in the 52nd. Felipe Mora finished off the scoring in the 86th minute. Timbers goalkeeper Steve Clark made seven saves to keep the clean sheet.

“Yeah, I mean it’s frustrating,” Earthquakes midfielder Shea Salinas said. “Honestly, they started the first half really well, and probably could’ve scored in the first five minutes of the game. Thankfully, they didn’t. We ended the half stronger, and then in the second half they came out and scored quickly on us. It puts you behind the eight ball, but I think we still tried to control the game, tried to stick with our game plan, and we had several chances there in the second half. I think if we bring one back, maybe it’s 2-1, and we fight for a late goal, but it just didn’t happen for us tonight.”

The NY Times’ Tariq Panja explains what the elite clubs want in an attempt to restructure the Premier League. BBC Sport outlines the plan. The Guardian’s David Conn argues against the quick negative response.