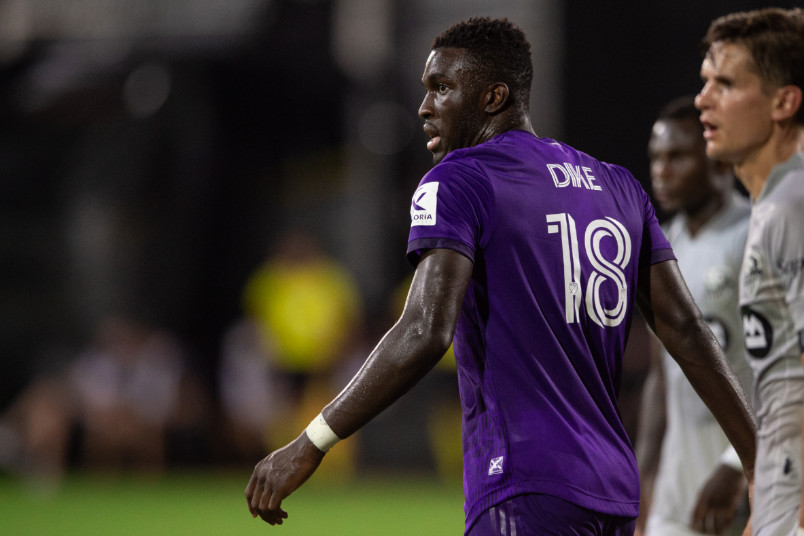 By Jason Davis – WASHINGTON, DC (Oct 21, 2020) US Soccer Players – Pushed to the limits of their available resources, Major League Soccer clubs are increasingly turning to squad players. If you want to win in 2020, you’re going to need a couple of less-heralded figures ready to step into the void if, or when, the stars go missing. Not all of the players that deserve more recognition are surprises, necessarily. It’s just that they are more central to the success of their teams than expected.

That could be a function of the strange season we’re watching, or it could be the typical churn that often waylays key contributors ahead of the stretch run. Injuries and poor form are parts of the game, after all. The teams that succeed are the ones that do the best job dealing with their unpredictable nature.

The Columbus Crew was one of a handful of budget-minded clubs who suddenly broke out the checkbook in the preseason transfer window. With new ownership in place and ahead of next season’s move to their new downtown stadium, the Crew splashed a record fee of a reported $7 million for Argentine playmaker Lucas Zelerayan.

For most of 2020, Zelerayan has proven to be worth the investment. In 11 appearances, Zelerayan has collected five goals and a pair of assists. He’s also the key creative influence in the club. It’s not always Zelerayan that makes the final pass because of the way Columbus plays, but the Crew is more dangerous when he’s in the lineup.

He’s also not in the lineup right now. Zelerayan suffered a hamstring injury in a draw against Dallas at the beginning of October, missing the next three games. For some clubs, losing their central attacking figure would be debilitating. Many a club in MLS history has been thrown sideways by such a development.

The Crew’s results took a dip without Zelerayan, but his absence does highlight the importance of the club’s other attacking pieces. Columbus lost to Montreal at home and FC Cincinnati on the road before righting the ship with a win over NYCFC on Saturday. Win or lose, the Crew attack hinged on the play of midfielder Pedro Santos.

Santos’ time in the middle of the field will end as soon as Zelerayan is healthy. Columbus will be better for it. Still, Santos’s play in the unfamiliar role in a difficult moment is a reminder that the Crew has some flexibility built into the squad that will serve them well down the stretch of the regular season and into the playoffs. It’s worth noting that the Crew is also missing Darlington Nagbe at the moment, a massive problem for a team that builds possessions through the middle of the field.

No team in MLS this season has been more impressive considering the circumstances than Toronto FC. Columbus has had a few injuries here or there. Toronto is missing key parts of its squad while playing home games in Connecticut.

Michael Bradley returned on Sunday following a long injury layoff. The veteran central midfielder deserves significant credit as a key reason for Toronto’s rise as an elite MLS club. He returns just as the regular season hits the final stretch of games.

Toronto sits atop the Eastern Conference and combined MLS standings because its depth helped cover for Bradley. The pair of Jonathan Osorio and Marky Delgado filled in ably. They helped push Toronto to a 9-game unbeaten run and the inside tracks on the top spot in the Eastern Conference. Bradley’s influence is such that it took two players to cover his role. That doesn’t take away from the work they did to keep the team on track.

Osorio’s move deeper into the formation is interesting because he has typically been a more attack-minded player over his career. The versatility he has shown when asked to play a deep-lying role, complete with the responsibility to key moves upfield with passing, is indicative of the identity formed in Toronto under head coach Greg Vanney.

Toronto’s midfield helps the attack work. That attack is missing Jozy Altidore and has largely turned to youngster Ayo Akinola at center forward. Toronto’s success scoring goals isn’t about Akinola, who has done a solid job filling in for his DP teammate. It’s about the play of MVP candidate Alejandro Pozuelo and, to a slightly lesser extent, winger Pablo Piatti.

It’s easy to give Piatti less of the credit than he deserves because of just how good Pozuelo has been in 2020. Pozuelo’s numbers speak for themselves with eight goals and 10 assists in 19 games. He rightfully gets the lion’s share of the plaudits. Piatti’s four goals and three assists aren’t as flashy, but speak to his important role as an additional creator in TFC’s forward lines.

Key on Pozuelo, and there’s a very good chance Piatti will punish you. He did exactly that against Atlanta United on Sunday when he slipped into the box and flicked a clever header inside the far post to give Toronto a late goal and a victory. Those three points separate Toronto from Philadelphia in the race for 1st-place with four games left to play.

Orlando City booked its first-ever playoff berth on Sunday with a draw against the Red Bulls. That achievement that rests squarely on the change in mentality in Central Florida fostered by head coach Oscar Pareja. Orlando doesn’t look all that different from the club that finished 11th in the Eastern Conference in 2019.

One of the new faces is rookie forward Daryl Dike. The University of Virginia product looked like a solid, if unrefined, prospect coming out of college. Few saw him playing a large role for the Lions in 2020. Injuries at the front of the formation, including those to Dom Dwyer that have limited him to just two appearances this season, pushed Dike up the depth chart.

Dike’s goal numbers aren’t mind-blowing. He has a total of four goals in just under 900 minutes of play. Instead, he’s ably giving Orlando a solid linking option up top while occasionally threatening with his speed and ability to beat defenders with the ball at his feet. Against New York on Sunday, it was Dike who split apart the Red Bulls and won a penalty kick when Amro Tarek chopped him down in the box.

Young players are thriving in MLS in 2020 thanks to the crush of games in a congested schedule. Despite not being a teenager homegrown player, Dike deserves to be mentioned as one of them. Along with his college teammate New England Revolution center back Henry Kessler, he’s show that it’s still possible for a first-year player fresh out of the collegiate game to make an impact in the ever-improving MLS.