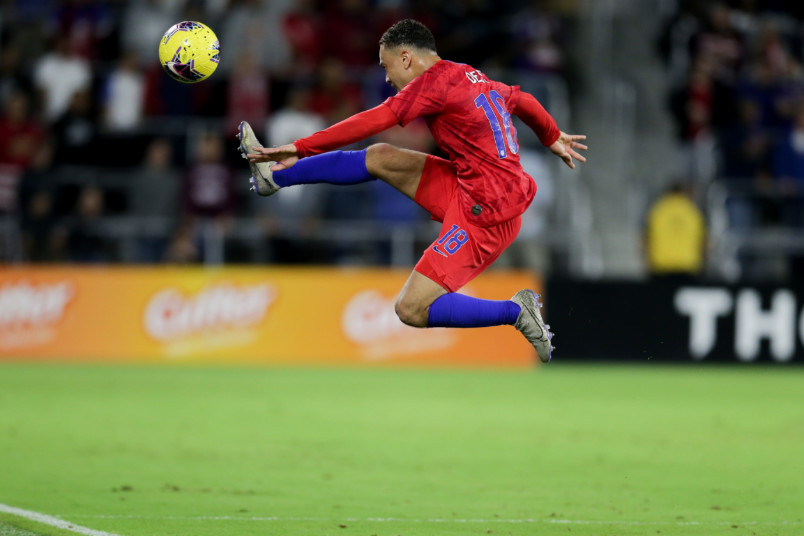 Thursday’s soccer news starts with another marquee move involving a USMNT player. Sergino Dest is now a member of FC Barcelona, completing his transfer from Ajax for a $24.6m transfer fee that could rise to just over $30m. Barcelona also added a $460m buyout clause to a deal that runs through the 2024-25 season.

Dest becomes the latest Ajax player to switch to the Spanish giants, a regular destination since the Johann Cruyff era. He also becomes the only USMNT player currently playing in Spain’s topflight.

Moving to the soccer scores, Andrija Novakovich subbed on in the 55th minute for Frosinone in their 3-1 home loss to Padova in the Coppa Italia. Andrea Tabanelli put Frosinone up in the 19th minute. Padova equalized in the 21st, adding goals in the 34th and 42nd minutes.

Zack Steffen’s Manchester City beat Burnley 3-0 in the League Cup. Raheem Sterling scored in the 35th and 49th minutes with Ferran Torres adding a goal in the 65th. Steffen made two saves to record the shutout. DeAndre Yedlin wasn’t in the squad for Newcastle United’s 1-1 draw at Newport County. Newcastle advanced 5-4 on penalties. Trailing from the 5th minute, Jonjo Shelvey equalized for Newcastle in the 87th. Newport County missed in the fifth round of penalties.

On the coaching front, Jesse Marsch’s Red Bull Salzburg advanced to the group stage of the Champions League, beating Maccabi Tel Aviv 3-1 at home to take their playoff series 5-2 on aggregate.

“I always believed we could do it,” Marsch said. “The club has become more mature and the boys have become more mature. The stress of the past doesn’t affect us anymore, and we made it…. We’re making new history! The boys were negotiating with me, as they wanted pizza, beer and two days off training [laughs]. We’ll be back training tomorrow though, as it’s only really started to get going for us.”

Awful Announcing’s Joe Lucia reports on the Premier League schedule on NBC and its Peacock streaming service. The Salt Lake Tribune’s Alex Vejar explains the impact of international call-ups for the October window. AP’s Ron Harris reports on the Premier League pushing its problems with the enforcement of the handball rule. The Telegraph’s Sam Wallace looks at the recent alterations to the rules. The Guardian’s Barney Ronay asks a crucial question about the sport.