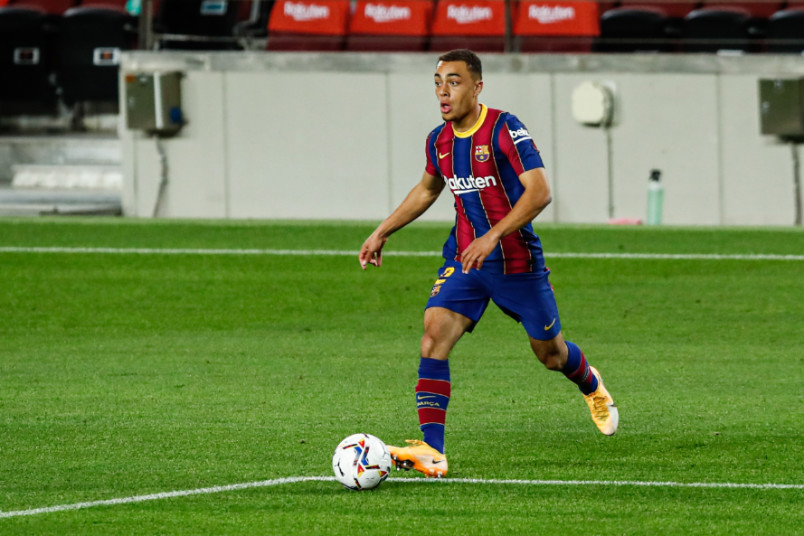 The roundup of USMNT players in Europe and Mexico starts in La Liga. Sergino Dest capped his high profile move from Ajax to Barcelona with playing time. Dest subbed on in the 75th minute of Barca’s 1-1 home draw with Sevilla. Trailing from an 8th minute goal, Philippe Coutinho equalized for Barcelona in the 10th minute.

“Sevilla are a great team,” Coutinho said. “They gave us a lot of problems. They played a really intense game, but this is a standard we will continue working to try to acheive.”

Timmy Chandler subbed on in the 87th minute of Eintracht’s 2-1 home win over Hoffenheim in the Bundesliga. Trailing from the 18th minute, Daichi Kamada equalized for Eintracht in the 54th. Bas Dost scored in the 71st minute. John Brooks’s Wolfsburg drew 0-0 at home with Augsburg. Wolfsburg had a 6 to 1 lead on shots on goal. Josh Sargent subbed out in the 81st minute of Werder Bremen’s 1-0 home win over Arminia Bielefeld. Leonardo Bittencourt scored in the 27th with Werder Bremen goalkeeper Jiri Pavlenka making four saves in the shutout.

“We had said before the game that it’s the type of match that can really help to kick-start your season,” Werder Bremen coach Florian Kohfeldt said. “In the first-half, we played very well and had complete control in my eyes. We matched Bielefeld well and created some good chances, as well as the offside goal. What we really need to talk about is the second-half. We came unstuck with two or three long balls and started to lose the control we had. At the end, we had a bit of luck but it was not an undeserved victory by any stretch of the imagination.”

Julian Green subbed out in the 85th minute of Furth’s 2-2 draw at Wurzburger Kickers in the 2.Bundesliga. Down a goal from the 2nd minute, Branimir Hrgota equalized in the 26th. With Wurzburger Kickers back in front from a 64th minute penalty, Maximilian Bauer leveled the score two minutes into stoppage time. In the 3.Liga, Terrence Boyd’s Hallescher lost 4-0 at Saarbrucken. Boyd saw yellow in the 64th minute.

Christian Pulisic subbed on in the 83rd minute of Chelsea’s 4-0 home win over Crystal Palace in the Premier League. Ben Chilwell opened the scoring in the 50th minute with Kurt Zouma doubling the lead in the 66th. Jorginho converted penalties in the 78th and 82nd minutes. Tim Ream and Antonee Robinson’s Fulham lost 1-0 at Wolverhampton.

“All the work I’ve put in since I was a kid has been to play in the Premier League,” Robinson tweeted. “Can’t describe how proud a day it is for me and my family that i’ve finally achieved that. Unfortunate not to come away with something too but we can build on the positives going forward.”

Geoff Cameron’s QPR drew 1-1 at Sheffield Wednesday in the Championship. Going behind to a 54th minute own-goal, Macauley Bonne equalized six minutes into stoppage time. Duane Holmes subbed out in the 63rd minute of Derby County’s 1-0 win at Norwich City. Wayne Rooney scored in the 87th minute. Lynden Gooch’s Sunderland drew 0-0 at Charlton in League One. Sunderland went a man down in the 73rd minute with a red card to Tom Flanagan.

Reggie Cannon’s Boavista drew 1-1 at Moreirense. Angel Gomes scored for Boavista in the 9th minute with Moreirense equalizing from the penalty spot in the 65th. Timothy Weah subbed on in stoppage time of Lille’s 3-0 win at Strasbourg. Mehmet Celik scored in the 21st with Renato Sanches adding a goal in the 53rd. Burak Yilmaz finished off the goals in the 68th.

Erik Palmer-Brown’s Austria Wien won 2-0 at WSG Wattens. Patrick Wimmer scored in the 46th minute with Manprit Sarkaria doubling the lead in the 75th. Aron Johannsson saw yellow in the 68th minute of Hammarby’s 1-1 home draw with Djurgarden. Muamer Tankovic put Hammarby up in the 25th with Djurgarden equalizing in stoppage time. Mix Diskerud saw yellow in stoppage time of Helsingborg’s 3-2 loss at Mjallby. Down a goal from the 11th minute, Brandur Olsen equalized in the 35th. Anthony van den Hurk made it 2-1 Helsingborg in the 50th minute. Mjallby equalized in the 72nd and scored in stoppage time.

Shaq Moore’s Tenerife lost 2-0 at Mallorca, going down a goal in the 20th and giving up a 55th minute penalty. Andrija Novakovich subbed on in the 51st and scored in Frosinone’s 2-0 win at Venezia. Novakovich’s goal came in the 58th with Przemyslaw Szyminski doubling the lead in the 71st.