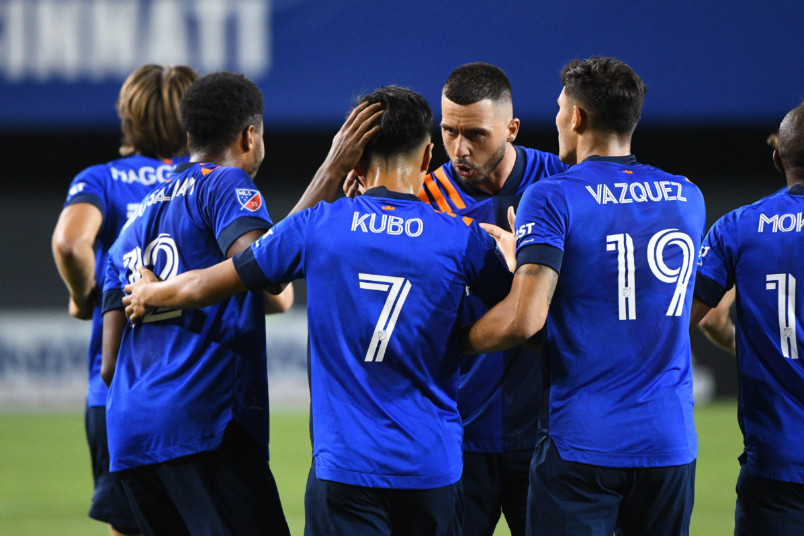 Thursday’s soccer news starts with the MLS roundup and another postponement. Chicago vs Minnesota didn’t go ahead as scheduled due to “a suspected case of COVID-19 among the Minnesota United team delegation.” On the field, New England beat Montreal 3-2 at Red Bull Arena. Kekuta Manneh opened the scoring in the 13th minute with Teal Bunbury making it 2-0 Revs in the 20th. Amar Sejdic scored for the Impact in the 27th. Adam Buksa extended the New England lead in the 52nd. Ballou Tabla pulled a goal back in stoppage time with Romell Quioto assisting on both Montreal goals.

“We’re going to take the three points on the road any day,” New England coach Bruce Arena said. “I think large segments of the game, we played well, but we had some sloppy moments. And that, we need to get better. If we continue to grow as a team and become a better team, days like tonight should be much more decisive in our win. That part is disappointing, but having said that, teams don’t win that many games on the road. We’ve done very well in that regard, so I have no complaints.”

FC Cincinnati surprised in-state rivals Columbus with a 2-1 win at Nippert Stadium. Yuya Kubo converted a Cincinnati penalty in the 17th minute. Columbus’s Pedro Santos equalized from the penalty spot in the 45th. Nick Hagglund put Cincinnati up for good in the 49th minute.

Orlando City drew 1-1 at home with NYCFC. Chris Mueller scored for Orlando in the 18th minute with Keaton Parks equalizing in the 43rd.

DC United got a point at home in a 2-2 draw with Philadelphia. Anthony Fontana scored for the Union in the 49th minute. Donovan Pines equalized for DC in the 71st and Yamil Asad gave them the lead with a 75th minute penalty. Mark McKenzie equalized for Philadelphia in the 87th.

“I’m obviously really disappointed,” Houston coach Tab Ramos said. “I felt that this was the game that would get us back into the playoff picture. If I have to be honest, I was sort of counting on it. It’s disappointing because basically in the first 10 minutes, we lost the game in a way that we thought we couldn’t possibly lose it, because we prepared for that. Losing balls in the middle of the field that turned into a turnover and a quick goal in the opposite way. That’s exactly how we lost it.”

“Anytime you lose a goal that late, you are happy to get a point,” United interim coach Stephen Glass said. “We didn’t come into tonight’s game hoping to just get a point. I think our performance on the night and with them scoring late and us having to come back late, we are sitting here delighted with a point tonight. It definitely carries us forward to the end of the season.”

Real Salt Lake beat Portland 2-1 at home. Douglas Martinez scored in the 11th minute with Damir Kreilach doubling the Salt Lake lead in the 26th. Bill Tuiloma scored for the Timbers in the 77th minute.

Vancouver beat LAFC 2-1 at Providence Park. Lucas Cavallini put the Whitecaps up in the 30th minute and doubled the lead in the 59th. Cristian Dajome and Fredy Montero assisted on both goals. Eduard Atuesta converted an 83rd minute penalty for LAFC.

San Jose’s return to form continued with a 4-0 road win at the LA Galaxy. Nick Lima opened the scoring in the 44th minute. Andre Rios assisted on the Lima goal, scoring his own in the 52nd. Tommy Thompson made it 3-0 in the 76th with Lima scoring again three minutes into stoppage time. James Marcinkowski made three saves to keep the clean sheet.

“We understand we need to fix a lot of things and fix some major problems, but we’re going to stay the course,” San Jose forward Chris Wondolowski said. We had belief, and we still do have belief that we’re going to make a deep run, making the playoffs, and make a run in the playoffs. That belief has never wavered.”

Also in the soccer news, Juventus announced that USMNT defender Weston McKennie has the coronavirus. The club is now in isolation to continue training. The Telegraph’s Tom Morgan, Sam Wallace, and Ben Rumsby report on a different plan to remake the Premier League. Reuters’ Simon Evans asks what’s next for the Premier League. The NY Times’ Tariq Panja and Romain Molina on the issues with the French Football Federation.