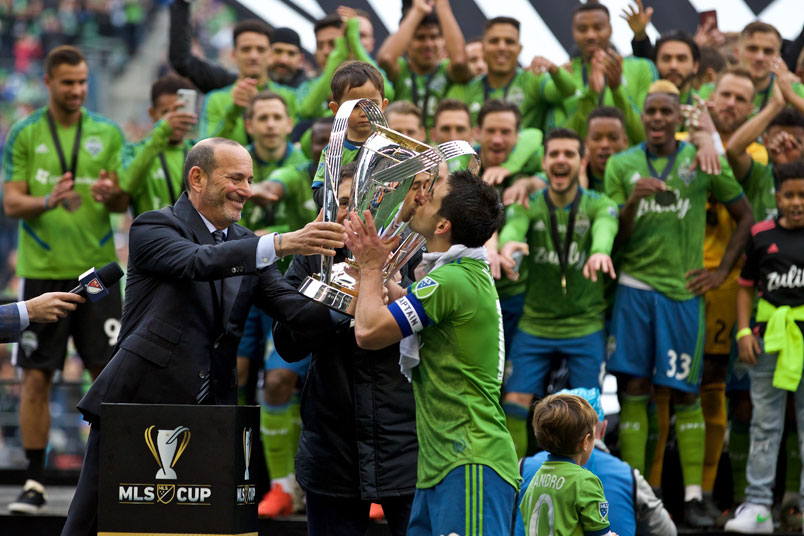 By Jason Davis – WASHINGTON, DC (Oct 9, 2020) US Soccer Players – Even in a season beset by a pandemic, with the schedule upended, travel more complicated, and home-field advantage chucked out the window, the Seattle Sounders and Toronto FC are intent on repeating history. Seattle and Toronto have faced off in three of the last four MLS Cup finals and look to be on a collision course to meet again in 2020.

We do have to throw out the necessary caveat that this is Major League Soccer, where nothing is ever certain. However, few watching the unfolding regular season would argue that the Sounders and Reds aren’t the best teams in their respective conferences.

The standings reflect as much, but so does the eye test. In a year when LAFC, Atlanta United, and several other contenders from 2019 are struggling, Seattle and Toronto are setting the bar for the best in MLS. Atlanta was the last team other than Seattle or Toronto to win a championship. To call United’s current situation “difficult” is an understatement. Last year’s Supporters’ Shield winner, LAFC, has learned the hard way that one 34-game stretch as the best team in MLS doesn’t mean you’ll always be a guaranteed contender.

Meanwhile, in Seattle, the Sounders are a study in what a well-coached, assured team can do regardless of small setbacks. Remember, the Sounders didn’t head into 2020 with big signings in tow. Due to budget constraints, the club had to move a few key contributors to the 2019 MLS Cup title-winning team.

The structures in place and the leadership of veteran players throughout the team helped smooth out the bumps brought on by those changes. To name just one example, the Sounders turned former Colorado Rapids and Orlando City defender Shane O’Neill into a regular contributor at center back due to issues with injury and form in that position.

The Sounders developed depth over several seasons and then managed to improve on it for 2020. That’s the mark of an organization that knows what it’s doing. The biggest trick in MLS isn’t just putting together a championship-caliber team for one year. It’s sustaining that level season after season working within a league system that actively works to hold dynasties down.

Jordan Morris is leading Seattle’s run in 2020. He’s in serious contention for the league’s MVP award, though Nicolas Lodeiro deserves just as much credit for helping the Sounders to top of the Western Conference. Lodeiro is not only one of the best attacking players in the league, his defensive work makes the Sounders that much more difficult to play against. Seattle’s league-high goal differential isn’t just a function of a few players.

The only argument against crowning the Sounders the best team in the West, no matter their point total, is the club’s inability to beat the Portland Timbers in 2020. In a year when the variety of matchups is smaller because of COVID-19 travel restrictions, the Sounders’ multiple tilts against Portland are the best test they’ve faced. That’s now 2-1 in favor of Portland. Seattle gets the chance to even the series at home on October 22.

Toronto FC faced down the best the Eastern Conference had to offer, despite some extra handicaps, and came out on top. The Reds’ resume as the class of their conference is practically unassailable. In back-to-back games to close out September, Toronto beat the conference’s other two clear contenders, Columbus and Philadelphia. They won those games despite relocating to the United States for the remainder of the regular season.

Because of COVID-19 quarantine requirements to enter and re-enter Canada, it was unfeasible for the league to schedule home games for Toronto. That means that TFC is winning matches against the best the conference has to offer while based out of Hartford, Connecticut.

Even without fans in the stands, the playing field tilts against Toronto. Instead of complaints or leaning on excuses built into its season by the impact of COVID-19, TFC is consolidating its position as a model MLS franchise.

Significant signings in recent years, include Alejandro Pozuelo also an MVP candidate. That’s kept the club near the top of the league in total spending. Toronto doesn’t just throw money at the problem of team-building. It picks and chooses where to strengthen, ensuring that there’s depth across the field in addition to top-end talent.

Right now, TFC is cruising at the top of the East despite a handful of key players missing time through injury. Michael Bradley hasn’t played in more than a month, and Jozy Altidore just went down with a hamstring injury. For most clubs, those losses would be devastating. For Toronto FC in 2020, they’re just opportunities for the likes of Liam Frasier and Ayo Akinola to show that they can hack it in a top tier MLS team.

There’s a long way to go before we get another Seattle vs Toronto clash for the biggest prize in MLS. Injuries, displacement, international call-ups, and a host of other problems could derail the momentum of both clubs. That caveat aside, regular-season success is only one part of the puzzle. Both Seattle under Brian Schmetzer and Toronto under Greg Vanney know what it takes to blaze a trail through the playoff season.

No one knows what the rest of 2020 will bring because we didn’t see any of what 2020 has already delivered. Surprises seem certain to happen unless we look up in December to see Seattle playing Toronto with the MLS Cup title on the line.