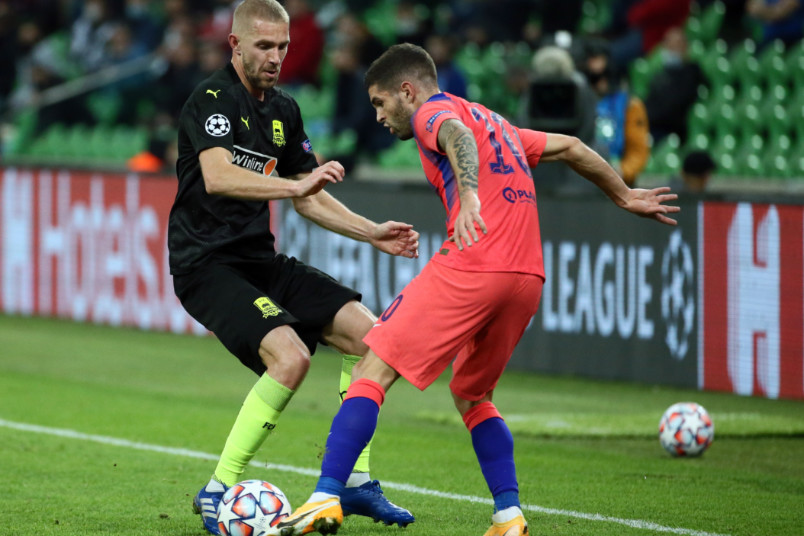 Thursday’s soccer news starts in the Champions League with Christian Pulisic subbing on in the 71st minute and scoring in Chelsea’s 4-0 win at Krasnodar. After Jorginho failed to convert a 13th minute Chelsea penalty, Callum Hudson-Odoi opened the scoring in the 37th. Timo Werner doubling the lead from the penalty spot in the 76th with Hakim Ziyech adding a goal in the 79th. Pulisic finished off the scoring in the 90th minute. Chelsea goalkeeper Edouard Mendy made four saves to keep the clean sheet.

“We’re working in a really positive direction,” Chelsea manager Frank Lampard said on Thursday. “I keep talking about the need for patience and hard work during this period because I understood early in this season that there would be some difficulties in trying to compete in this unforgiving Premier League with new players, some of them having never played in this league before. The signs I see game after game and week after week, there are a lot of positives.”

Weston McKennie subbed on in the 75th minute for Juventus in their 2-0 home loss to Barcelona. Ousmane Dembele scored in the 14th minute with Lionel Messi doubling the lead from the penalty spot in stoppage time. Juventus played a man down from the 85th with a red card to Merih Demiral. Sergino Dest was on the bench for Barcelona.

“It is a match that will allow us to grow,” Juventus coach Andrea Pirlo said. “We knew it would be difficult against a strong team. We are under construction. We had to position ourselves better on the pitch, because on many occasions some of our players were too close. We had to be quicker with regards to changing the game, because we kept Chiesa wide to go one-on-one, but we couldn’t trigger it. Furthermore, I hope to recover other players because at the moment we have no other solutions.”

“That was a tough one to take,” RB Leipizig coach Julian Nagelsmann said. “Of course, a result like that doesn’t feel good. The scoreline is much too high. We played well in the first half but weren’t great in the final third. After the second goal, we stopped defending. That’s the only criticism I can make of the boys. All along, you actually felt like things were going okay, but you end up losing 5-0. We paid the price. Aside from the last 20 minutes, our performance wasn’t too bad.”

Cameron Carter-Vickers wasn’t in the squad for Bournemouth’s 1-0 home win over Bristol City in England’s Championship. Arnaut Danjuma scored in the 81st minute. Duane Holmes was on the bench for Derby County’s 1-1 home draw with Cardiff City. Martyn Waghorn scored for Derby in the 24th with Cardiff equalizing in the 77th minute. Luca De La Torre wasn’t in the squad for Heracles in their 3-0 home win over Telstar in the KNVB Beker. Sinan Bakis converted a 28th minute penalty with Rai Vloet doubling the lead in the 72nd. Adrian Szoke added a third goal in stoppage time.

SI.com’s Brian Straus on the issues for the LA Galaxy and what needs to change at the struggling club. The Independent’s Miguel Delaney tells the story of Dundalk in the Europa League and the state of Irish club soccer. The Guardian’s Sid Lowe’s take on how former Barcelona president Josep Bartomeu made his exit.