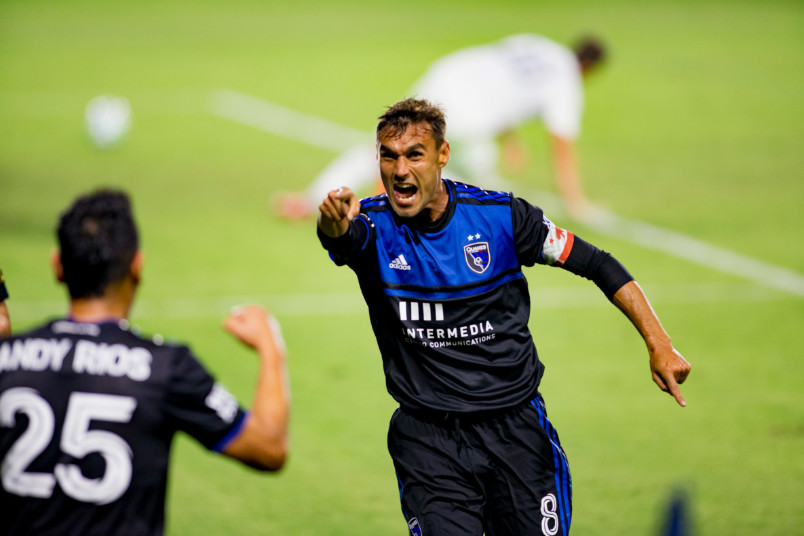 By Jason Davis – WASHINGTON, DC (Oct 16, 2020) US Soccer Players – There are almost too many places to start when it comes to Major League Soccer’s Wednesday night round of games as a signifier of the strange season we’re living through together. This is soccer in the middle of a pandemic, so naturally, there was a postponement. Minnesota didn’t host Chicago due to a “suspected case” of COVID-19. Erring on the side of caution is the right thing to do, but it doesn’t make it any easier for the league to conduct the rest of the “regular” season with any regularity.

Remember, MLS has already canceled all of the Colorado Rapids matches for the remainder of October, a wrench in the works that might force the league to go to a points-per-game system for determining playoff qualifiers. With games falling by the wayside, further adjustments to the competition are inevitable.

Plenty of soccer did happen. In what has become something of a hallmark of the midweek rounds, it delivered surprise and excitement in equal measure. If you’re looking hard enough, it’s not difficult to find the themes of the season getting a full expression across 11 matches.

Why not start with Caden Clark, the New York Red Bulls 17-year old midfielder? Clark backed up his debut goal, a game-winner against Atlanta on the weekend, with a stunning left-footed strike that salvaged a point for New York against Toronto FC on Wednesday night. Clark came on as a second-half substitute against the Reds and drifted between Toronto’s lines to find space for his brilliant shot 18 minutes after entering.

The power and placement of the shot, emerging from under him, was enough to elicit involuntary gasps. Long-range goals happen with regularity. It takes a truly special, skilled one to stand out.

Clark’s arrival is a story unto itself and one that is uniquely MLS. Despite his never playing in the Minnesota United academy, the Loons scooped up $75,000 in General Allocation Money from the Red Bulls for his rights. Clark only signed his MLS contract on October 10, a move facilitated by the trade.

Before making the move into the MLS squad, Clark played for New York Red Bulls II in the USL Championship. He joined that club after spending three years in the Barcelona Residency Academy in Arizona. At no point did he appear likely to join Minnesota United, though coach Adrian Heath did go to great pains to explain that the club offered Clark a contract and a chance to play in Madison for United’s USL League One affiliate. Because of the league’s territorial rules around young players, the club still had a claim to his rights.

There wasn’t a lot to celebrate in Red Bull Land before Clark appeared on the scene. The club has a protracted wait in front of it for the arrival of new head coach Gerhard Struber. The lack of attacking firepower remains a problem in the quest for the playoffs. Struber’s late arrival makes it difficult to see his hiring as anything but one for 2021, making it easy to imagine 2020 is a lost cause.

With 10 playoff spots available in the East and the rise of Clark, perhaps the Red Bulls and build towards an unlikely postseason run in a season built for something unlikely.

2020 is the year of players most fans never knew existed popping up and making contributions in league matches. The pandemic’s impact on rosters has forced coaches to give more time to academy products. Many of those players are delivering. It wasn’t just Clark on Wednesday. San Jose routed the Galaxy thanks in part to the work of Cade Cowell, a teenager who earned his way into Matias Almeyda’s rotation in his first full year as a professional.

The Quakes roller coaster season will eventually be the stuff of legend if they can find enough consistency to qualify for the playoffs and win at least a game or two once they get there. Matias Almeyda’s club plays with an open throttle and no brakes, making for one of the strangest back-and-forth swings in play for any team in league history. Cowell’s assist to Nick Lima was the fourth goal in the 4-0 victory over the Galaxy, but the LA side was dead well before the added time dagger.

Following Wednesday’s home loss, the club’s sixth in a row, the microscope focuses on Guillermo Barros Schelotto and the Galaxy leadership. A coalition of supporters groups issued an open letter on Thursday expressing anger over the current state of the club and lack of direction.

“This is not good enough. This is not living up to the badge,” the letter begins. It only gets more excoriating from there.

Whether the fan protest moves the organization to act or not, there is something wrong with the Galaxy. Javier “Chicharito” Hernandez, he of a lone goal on the season, is getting the scapegoat treatment though there’s plenty of blame to go around. Advanced statistics can tell you a lot about how the game played out, and they don’t make the Galaxy look any better than the scoreline. Still, it’s the eye test with the Galaxy players look uninterested that’s most concerning for Schelotto, general manager Denis Te Kloese, and Galaxy president Chris Klein.

Wednesday night also reminded us about the limitations of VAR and the extra salt a missed call in the age of video replay can toss in a fresh wound. Several teams are nursing grudges against referees after they missed out on points because of controversial decisions across the country.

The Crew lost to FC Cincinnati thanks in part to an early penalty call that gifted FCC a lead. Despite the replay showing a fairly innocuous collision between Crew goalkeeper Andrew Tarbell and FCC’s Alan Cruz, referee Rubiel Vazquez stuck with his penalty call. There is some controversy over whether he communicated with the VAR at all.

Philadelphia conceded a penalty on a questionable handball call against Alejandro Bedoya. His arm was against his body when the ball struck it in the box, but a VAR review failed to overturn the call. The collision of the spirit of the revised handball laws and the practical application might have cost Philadelphia a point towards first place in the East.

Then there’s Sporting Kansas City. Late in the match against FC Dallas down a goal, SKC played a short corner kick that resulted in a shot saved by FC Dallas’s Jimmy Maurer. The rebound came to Sporting’s Gadi Kinda, who forced Maurer to make another save. As Kinda attempted to follow up, Maurer took the SKC man down. The ball eventually ended up in the net, but referee Alejandro Villarreal blew the whistle for a foul… on Kinda.

Of the many shocks, surprises, and strange happenings, it’s tough to top that one. Why was it not a goal? Why did replay not reverse what looked to be an obvious error? In this strangest of seasons, who knows.