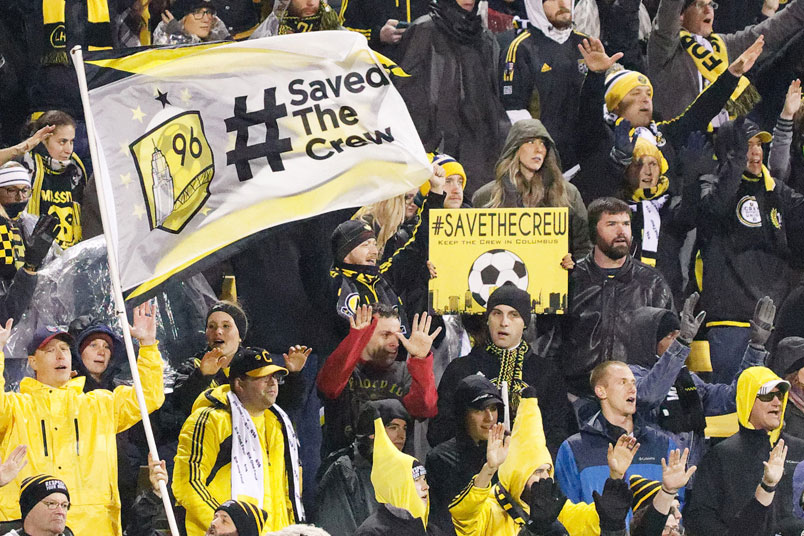 By Jason Davis – WASHINGTON, DC (Oct 14, 2020) US Soccer Players – When total redemption undoes deepest despair, it’s easy to forget just how bleak the dark times were. There’s a trick our minds play on us, something akin to a coping mechanism, that pushes out negative memories in favor of better ones. Columbus Crew fans might know a thing or two about this phenomenon. “It’s always darkest before the dawn”, as they say. Crew fans might also be able to explain why it sometimes takes suffering to bring about new hope.

On Monday, Columbus Crew fans celebrated the anniversary of the day that washed away a year full of bleak memories. October 12 marked two years since one of Major League Soccer’s original franchises, a team that helped usher in the soccer-specific stadium era in American soccer, didn’t relocate to Austin, Texas.

Who to credit for the “saving” is worth a quick examination. The simple answer to the question is the new investor/operators of the Crew, led by Jimmy and Dee Haslem owners of the Cleveland Browns and the Edwards family headed by the Crew’s team doctor for the last 25 years, Dr. Pete Edwards. It was the money that allowed MLS to shift ownership of the Crew to new, locally invested people.

Less tangibly, it was the fans in Columbus who saved the Crew. The moment the news broke of a potential move, soccer fans in the region mobilized in opposition. The Save The Crew movement is entirely modern in the sense that it first formed around a hashtag and then grew into an organized response. It’s fair to say that if not for those fans, it would be a different story.

That version of the story would be familiar to fans across the country. Relocating teams is part of American sports. After more than a century of watching owners take their franchises and move them wherever best served their businesses, American sports culture became numb to the practice. There are almost more American cities with a story about a lost sports team than there are without one. No place is immune.

Under its previous investor/operator, Columbus was a problem. There was the lack of positive “business metrics.” The club’s stadium was aging in place at the fairgrounds rather than downtown. Meanwhile, one of the cities that’s normally high on the list of best places to live was showing interest. Austin turned into more than a possibility. Fans there gathered and celebrated, acting as if the deal was already done. It seemed like the Crew was on its way to becoming the Texas capital’s first major league professional sports team. There was an announcement of a name, logo, and slogan.

Meanwhile, the State of Ohio joined the fight on the side of the Crew. Those entities might have stepped up even in the absence of a well-organized fan movement, but the noise made by the Save the Crew group played a role in forcing a quick response. Ohio even went so far as to sue Precourt Sports Ventures under a statute created after Art Modell moved the Cleveland Browns to Baltimore in the late 90s. That law is one of the few attempts to throw up barriers for owners always looking for a sweeter deal.

As it turns out, Major League Soccer granted Precourt Sports Ventures an out in its operator agreement. That specifically allowed the team to relocate to Austin under certain circumstances. Of course, the Crew didn’t move to Austin in the end. Instead, MLS took the only option that made sense.

The Crew will open a new state-of-the-art soccer venue in Columbus’s downtown stadium district in early 2021. That should change the “business metrics” of the club, just a little. What began in October 2018 invigorated an original MLS city in an era when original MLS franchises are struggling to keep pace with newer expansion franchises.

Let’s state this plainly because it remains the most remarkable note about the Save the Crew success: There is nothing like it in the annals of professional sports in the United States. Top-level soccer may be relatively new to the pro sports scene in America, but that doesn’t mean it isn’t subject to the same issues as older leagues. Never before had a fan movement successfully prevented a team from moving.

This wasn’t a stadium deal somewhere else falling through or a sale coming up short. It wasn’t even the fans of the old Tulsa Roughnecks keeping their team in business through a fundraiser. This was soccer fans in Columbus rising up and saving their team.

Two years after saving the Crew, there’s a new investor/operator in place with a new stadium on the way. On the field, the club is a contender. It’s part of an overall hopeful outlook that promises big things for an MLS original. It’s the continuing story of the people and what they did to keep their team.