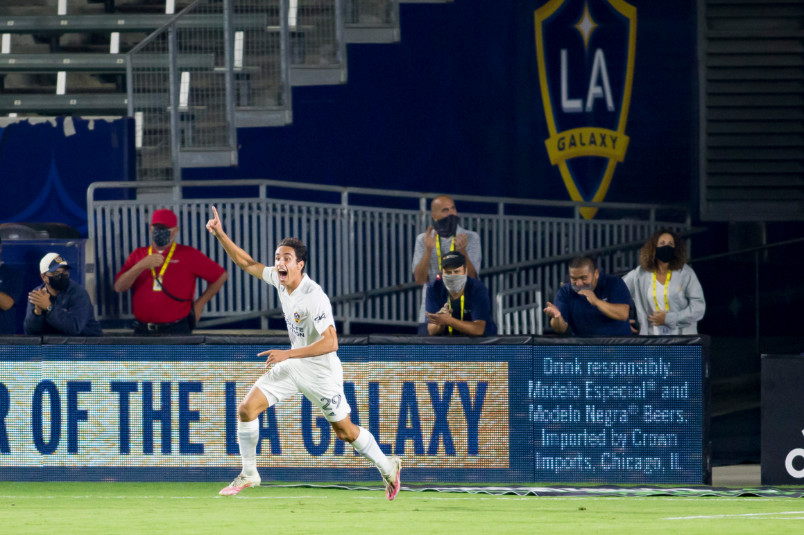 By Luis Bueno – RIVERSIDE, CA (Oct 21, 2020) US Soccer Players – The LA Galaxy has been trying to recapture magic over the last three-plus seasons. While the club has not won an MLS Cup since 2014, the team was still quite competitive in 2015 and 2016. For both of those years, the rosters were quite formidable even if the team’s results did not match that potential output.

Since the end of the 2016 season, though, its become a predictable story. The club suffered through two playoff-less seasons before making strides a year ago and reaching and winning in the playoffs. This club looked on the brink of a breakthrough. Instead, what it got was a breakdown.

Even though General Manager Dennis te Kloese and head coach Guillermo Barros Schelotto came in to right the ship, this club has been unable to escape the storm that has engulfed it for nearly four years now. The once-proud Galaxy franchise has been downgraded to a middling franchise at best, closer to the bottom than the top. Right now, they’re a last-place team.

Change seems imminent. A club like the Galaxy fancies itself a title contender every year. They simply cannot afford to stand pat through such a poor campaign. Then again, the way the Galaxy is playing may not lead to immediate answers. The team lacks a key ingredient that helped it win three championships in a four-year span and had made it a legitimate title contender for eight consecutive seasons. This team has no heart. It plays for nothing.

What has made the Galaxy great has been its passion and intensity even when they were spending more than anybody else in the league. In its heyday, the Galaxy was competitive for every match with rare exceptions. The team would find ways to win. While it may have seemed like a bit of good fortune at the time, that was just the hallmark of the club.

That has disappeared from the team. Since 2017, the Galaxy has been going through the motions. Leaders on and off the field like Landon Donovan and David Beckham have vanished. The coaching has been different and unable to establish a tone and level of expectation that Bruce Arena had set during his nine-year run.

Arena established that tone immediately with the Galaxy. He brought in veteran leaders like Gregg Berhalter, Tony Sanneh, and Eddie Lewis and inherited other strong leaders like Greg Vanney and Chris Klein. Arena relied on those veteran players. That helped change the tone immediately. The locker room went from a place with many players with many different mindsets to one organized unit fighting for the same goal.

It is no coincidence that two of that group of players have gone on to be successful coaches themselves. Vanney turned around Toronto FC. Berhalter succeeded with Columbus before taking on the USMNT job.

The Galaxy now seems like throwing money at players is the way to succeed. While high salaries have certainly been a part of the club’s past, they spent money in a smart and targeted manner. The Galaxy tried its luck with Juan Pablo Angel, but after half a season they pivoted and made a move for Robbie Keane. They tried to recapture that magic by bringing in Steven Gerrard. While Gerrard did not help the Galaxy win an MLS Cup, he was a leader and a strong presence around the team. Gerrard incidentally is now a manager himself, having led Rangers since 2018.

A revolving door of marquee players is its own story in MLS. The Galaxy is key to that narrative, which is why it’s so obvious when it doesn’t work. Calling anybody a bust in this bizarre season is a bit much, but Chicharity Hernandez hasn’t delivered at the level needed to help this team improve. It’s hard to be a box office draw when there is no box office, taking that factor out of the marquee equation. That probably made the decision to bench him last week easier.

Chicharito subbed on early in the second-half against Vancouver. It turned out to be Kai Koreniuk, formerly of LA Galaxy II, that beat Vancouver. Koreniuk scored in stoppage time on his Galaxy debut to help the club win 1-0. That victory left them a point behind the Rapids at the bottom of the Western Conference. It’s worth pointing out the Rapids haven’t played in weeks due to coronavirus positives.

What the Galaxy has right now is at least the indication of a new core of players. It’s not going to be cheap. Cristian Pavon has been outstanding and has looked every bit the Designated Player he is. Although he is on loan from Boca Juniors, the Argentine club is willing to deal him to the Galaxy. The reported $20 million fee is the problem. The Galaxy nabbed Yony Gonzalez on loan from Portuguese side Benfica. Gonzalez previously stood out for Brazilian sides Fluminense and Corinthians.

When new players or young players step into this current environment though it is different than it was before. Simply displaying the Galaxy’s crest and five stars is not enough to inspire players, at least not right now. What helped bring that history to these colors though, was a winning mentality forged by veterans, talented players and, above all else, leaders. Barros Schelotto might not be the right person to bring that back to the club. In fact, rumors have swirled that Keane, the club’s beloved former star striker, is a candidate to replace Barros Schelotto.

Whether or not there is any truth to those rumors is an open question, but the Galaxy needs something. It’s not another spending spree. Instead, it’s the intangibles. In the end, that’s far more valuable than big-name players that everyone knows. True leadership, not star players, will lead the Galaxy back to where it wants to be and where it should be. This is a club all about contending for league titles, piling up wins, and adding to its history instead of just pointing to the trophy cabinet to remind everyone of some long-ago glory.