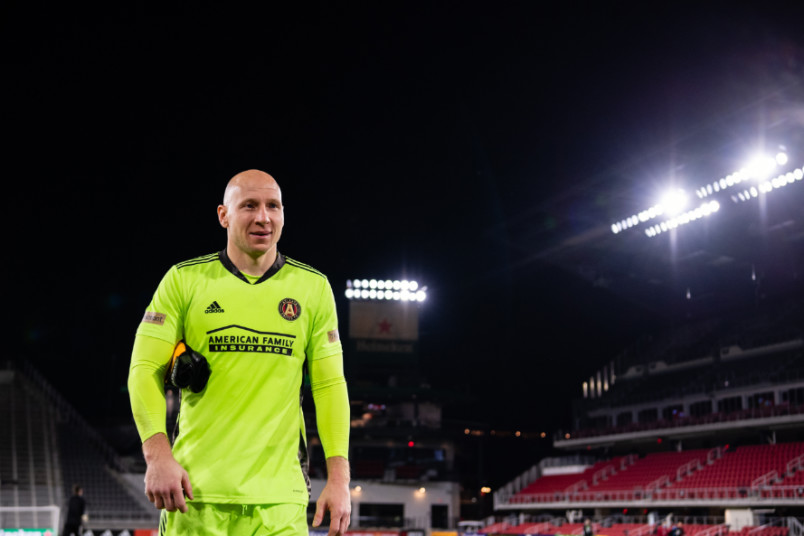 Monday’s soccer news starts with the MLS roundup. Orlando City beat the Red Bulls 3-1 at home. Daryl Dike opened the scoring in the 24th with Junior Urso doubling the lead in the 50th. Florian Valot scored for the Red Bulls in the 54th. Carlos made it 3-1 Orlando five minutes into stoppage time.

DC United had no answers in a 4-0 home loss to Atlanta. Jon Gallagher scored in the 4th minute with Brooks Lennon assisting. Lennon doubled the lead in the 41st with Gallagher scoring again in the 65th. Lennon assisted on Adam Jahn’s goal in the 70th minute. DC went a man down with a red card to Frederic Brillant in the 85th minute for denial of an obvious goal scoring opportunity.

“I think from the start of the game there was a stronger focus from our side,” Atlanta coach Stephen Glass said. “It looked like there was a bigger determination not to lose a goal. Obviously, we bore the fruits of that early in the game. From there, we find ourselves up instead of down and the team grew in confidence from that. They then built on it throughout the night. The players thoroughly deserve everything they got tonight.”

Montreal and Chicago drew 2-2 at Red Bull Arena. Robert Beric scored for the Fire in the 15th minute. Lassi Lappalainen pulled a goal back for Montreal in the 22nd with Maximiliano Urruti scoring in the 67th. Francisco Calvo equalized for Chicago in the 73rd.

“It’s never easy on the road,” Fire coach Raphael Wicky said. “You all know that. It’s never easy when you get, out of nothing, get a goal like this and then there was a really good reaction of the team. I think in general they pushed well. We pushed, could have gone both sides, but at the end of the day we take the point. But it was a good reaction, which is important.”

New England and Nashville drew 0-0 at Gillette Stadium. The Revolution put 5 shots on goal to Nashville’s 1.

“I think it’s a common denominator how teams play us in Gillette,” Revolution coach Bruce Arena said. “They drop off. They play in a low block and they make it difficult. And technically, we were not good enough tonight. Having said that, in the second half, there was some opportunities to get a goal and win the game and we failed to do that.”

Toronto came back to beat Philadelphia 2-1 at Rentschler Field. Sergio Santos put the Union up in the 5th minute. Ayo Akinola equalized for Toronto in the 58th with Alejandro Pozuelo scoring in the 76th minute.

Sporting Kansas City beat Houston 2-1. Alan Pulido scored in the 34th and 73rd minutes with Gianluca Busio assisting on both goals. San Junqua pulled a goal back for the Dynamo in the 84th.

“I think for 60 to 65 minutes we played pretty well,” Houston coach Tab Ramos said. “Unfortunately, like its happened in the last few games, we can’t take advantage of the way we play and take that into a lead in the game. We’re falling behind. I think Kansas City scored their goal on their first shot on goal in the 30th minute. We had quite a few chances to be up in the game before that – we’re having a little trouble finishing right now. We just have to deal with that and be strong because we’re creating the opportunities, but not putting them away.”

NYCFC beat Inter Miami 3-2 in Fort Lauderdale. Alexandru Mitrita scored for NYCFC in the 4th with Lewis Morgan equalizing in the 27th. Anton Tinnerholm made it 2-1 NYCFC in the 35th with Alexander Ring assisting on both goals. Morgan scored again for Philadelphia in the 38th. Ring picked up his third assist of the game when Mitrita scored again in the 43rd minute. Inter Miami goalkeeper Luis Robles went down in stoppage time with what was later diagnosed as a fractured arm.

Minnesota United shutout Cincinnati 2-0 at home. Kei Kamara converted a penalty in the 16th minute with Kevin Molino doubling the lead in the 69th. Dayne St Clair made three saves to keep the clean sheet.

FC Dallas drew 2-2 at home with Columbus. Michael Barros put Dallas up in the 38th with Youness Mokhtar equalizing in the 47th. Reto Ziegler converted a Dallas penalty in the 53rd with Pedro Santos equalizing in the 62nd.

Seattle beat Vancouver 3-1 at home. Joao Paulo scored for Seattle in the 46th with an own-goal doubling the lead in the 53rd. Raul Ruidiaz made it 3-0 Seattle in the 58th. Fredy Montero converted a Vancouver penalty in the 65th minute.

San Jose beat the LA Galaxy 2-1 at Earthquakes Stadium. Sebastian Lletget scored for LA in the 4th minute. Marcos Lopez equalized for the Earthquakes in the 42nd with Andres Rios converting a penalty in the 82nd minute.

“Tonight, we felt joy,” Earthquakes coach Matias Almeyda said. “The players in these last two games have given a whole lot. They are believing more in themselves, and luckily after a long time we were able to train for one week straight. I think today we faced a very difficult opponent, the previous game as well, and we were able to be competitive and get the victory.”

LAFC won 3-1 at Real Salt Lake. Bradley Wright-Phillips opened the scoring in the 22nd minute with Diego Rossi doubling the lead in the 27th. Wright-Phillips assisted on Brian Rodriguez’s goal in the 59th minute, with LA giving up an own-goal in the 64th.

The Guardian’s David Hytner has Liverpool manager Jurgen Klopp’s response to his club’s 7-2 loss at Aston Villa. The Independent’s Miguel Delaney questions the manager in Manchester United’s 6-1 home loss to Spurs. The NY Times’ Rory Smith explains players that can get away with mistakes.