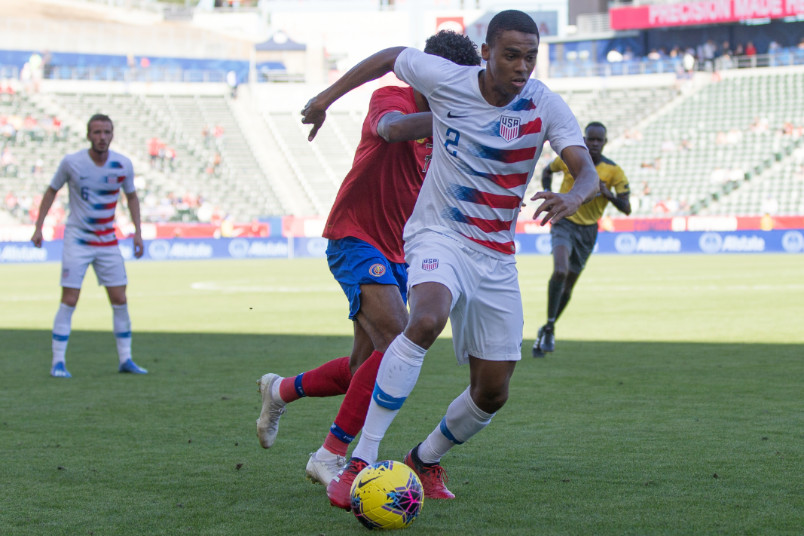 By Clemente Lisi – NEW YORK, NY (Oct 5, 2020) US Soccer Players – Mention American players and Portugal, and what instantly comes to mind is the 2002 World Cup. It was at that tournament that the United States defeated Portugal 3-2 to open the group stage. That victory helped the USMNT to ultimately reach the quarterfinals, the program’s best finish since 1930.

Portugal has been a destination for US players in the past. It’s a domestic league with a storied history that’s a good place for Americans to get minutes and possibly catapult to places like the Premier League and Bundesliga. In many ways, it’s a perfect fit for Americans.

The clubs from Europe’s top five domestic competitions are usually risk-averse and like to spend money on players primarily from Europe and South America. Brazil, Argentina, and Uruguay have traditionally been a pipeline for English, German, Spanish, Italian, and French clubs. This is especially the case with the big spenders in those leagues.

Portugal, like the Netherlands and Belgium, have clubs who invest in players with the aim of further developing them and putting them back on the transfer market. The hefty transfer fees they get in return helps keep these teams viable financially. That also makes Americans to be an attractive option for these clubs.It’s why the recent Boavista signing of 22-year-old FC Dallas defender Reggie Cannon may be a harbinger of more to come. MLS may not want to see itself as turning into a feeder league, but they may have no choice when stronger clubs from other leagues see opportunities. Boavista’s subsequent signing of Honduran striker Alberth Elis from the Houston Dynamo just a few weeks ago is further proof of that.

“I always wanted to continue my career in Europe,” Cannon told the Portuguese sports daily A Bola. “This is a fantastic place to play.”

Three teams dominate the 18-team Primeira Liga: defending champions FC Porto, Benfica, and Sporting. The league has featured some of the world’s best players of the past two decades, including Diego Costa, Angel Di Maria, Cristiano Ronaldo, and Joao Felix. In the case of all these players, it was a springboard to future success in other leagues.

There have also been some notable US players in Portugal over the years, including Jovan Kirovski, Kenny Cooper, and Oguchi Onyewu. The careers of these three, all of whom played during different eras, are examples of how the Primeira Liga can often lead to greener pastures. Kirovski (Sporting, 2000-01), Cooper (Academica de Coimbra, 2004), and Onyewu (Sporting, 2011-13) all played for a limited time in Portugal. All three went on to greater success elsewhere.

Onyewu, for example, joined Sporting starting in 2011, finally finding some success before being loaned out to Spanish side Malaga a year later. He was upset by the move at the time, but took it in stride.

“After that, jumping from country to country and immersing myself in the culture – learning the languages I have and meeting the people I’ve met – is something no-one can take away from me,” he told the BBC in 2012. “If you had told me 10 years ago, that I would be able to speak French, Italian, and Portuguese, I would have laughed at you.”

Cannon joins other Americans currently in Portugal like defender Stephen Payne of first division side Portimonense Sporting Clube and midfielder Sergio Duarte of third division club Uniao de Leiria. While Payne and Duarte aren’t household names among even the most die-hard US fans, they represent this country’s deep talent pool. In Duarte’s case, the New Jersey native signed a three-year deal with first division club Nacional in 2012 at age 19. A Portuguese-American, Duarte was loaned out to several lower-tier clubs over the years and has been at Uniao de Leiria since 2017.

How to watch the Primeira Liga

The league remains very underrated among US audiences. Despite the dominance of a few teams , that shouldn’t stop Americans from tuning in each week like they do for other top-heavy leagues. The Primeira Liga, if you look at Champions League co-efficient rankings based on past success, is in the same category as Russia, Belgium and the Netherlands. These last two have also been places where Americans have thrived in recent years.

Cannon’s move to Boavista gives us all a good excuse to follow the Portuguese topflight more closely. While there are many fans in Northern New Jersey and across New England, the rest of us are missing out. GolTV, available on cable or with the streaming service fuboTV, broadcasts Primeira Liga matches. The streaming service has been showing games since 2016 after Sport TV Americas announced it had ended its global broadcast service.

In normal times, Newark’s Ironbound section, just outside New York City and minutes from Red Bull Arena, features a dozen bars where you can catch games. The pandemic has made such social gatherings more complicated, but this time last season Benfica fans would turn these New Jersey streets into something you’d see in Lisbon.

An eye on Cannon and Boavista

Cannon completed a $3 million transfer move to Boavista on September 9. The former FC Dallas standout made his official debut three days later, scoring a goal in Boavsita’s 4-1 rout over CD Tondela in a preseason friendly.

“I am a very dynamic player who likes to go back and forth on the flank and my offensive ability will be important to help this team,” he said. “I am also defensively aggressive.”

Boavista has won nine major domestic trophies with one league championship in 2001, five league cups, and three domestic Super Cups, the most after Porto, Benfica, and Sporting. The club hails from the northern city of Porto and was founded in 1903 by British businessmen. Famous for its black-and-white checkered jerseys, they play at the 30,000-seat Estadio do Bessa.

Three games in, Boavista finds itself in the bottom half of the table after grabbing just its second point of the season this past Friday with a 1-1 draw against Moreirense. It’s a decent start, but the season is still long for a club that finished 12th last season. Canon has so far started in all three games.

Cannon’s move to Portugal gives Americans a new reason to watch the Primeira Liga. Americans already have plenty to watch on TV, but Cannon’s success could determine whether more MLS talent moves to Portugal in the coming years.