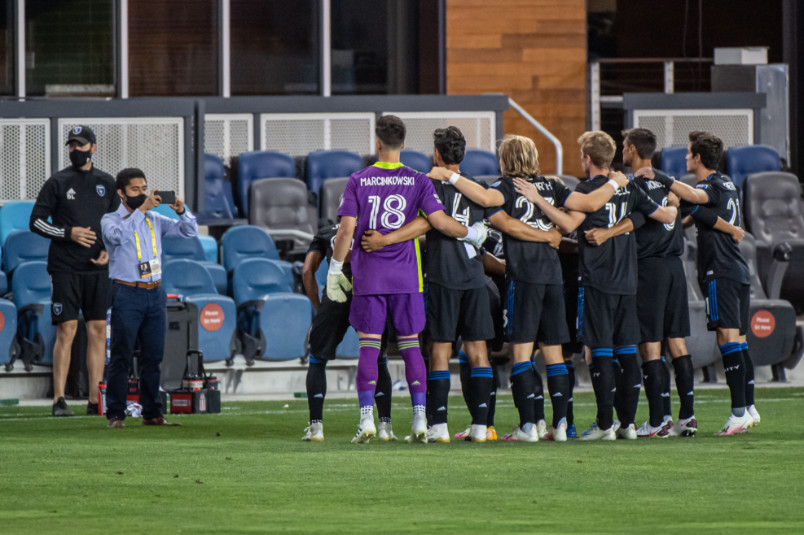 By Jason Davis – WASHINGTON, DC (Nov 4, 2020) US Soccer Players - The buildup to Major League Soccer's annual curtain-closer for the regular season seems a little muted this year. "Decision Day," as the league dubbed it a few years back to amplify the potential drama of the last round matches, got waylaid by the virus just like the rest of us.

Cancellations, empty or mostly empty stadiums, lower quality of play, and a host of other factors fed into a regular season climax that won't be near as climatic this season. There are things to play for, but with the impact of COVID-19 reworking the schedule and the looming possibility that the playoffs could be affected by outbreaks, it's just hard to get super excited for the final day of the regular season.

Moving to points-per-game to determine playoff seeding is the major culprit in undermining the power of Decision Day. There was no other alternative, with so many games canceled due to COVID-19 positives at several clubs. Still, the upshot of switching to points-to-game is that the impact of Sunday's schedule is less clear.

The league and teams will work to disseminate the stakes ahead of matches, but many fans will be left scratching their heads over the math at play. This is particularly true in the Western Conference, where the number of games played is all over the place. Because of Colorado's month sidelined due to an outbreak, only a handful of teams will reach the originally planned 23 total for the revamped regular season.

Wednesday is something of a stage-setter for Decision Day. Twelve teams will get a chance to improve their lot slightly ahead of Sunday's curtain drop. A pair of Eastern Conference teams battling for 3rd-place in the standings is the "marquee" match of the evening.

This is how weird things are, courtesy of COVID-10 concerns. LAFC's visit to San Jose on Sunday was postponed due to positive tests in the Los Angeles camp, only to end up on Wednesday night. Bob Bradley's team has already qualified for the playoffs, while the Quakes need a point to lock up their spot.

The yo-yo of planning for a Sunday match only for it to be moved to Wednesday underlies the problem so many teams face. Professional soccer clubs, particularly the successful ones, are highly tuned with every moment planned out. In 2020, positive COVID-19 tests can bring all team activities to a halt. Once a club can resume training, it often means attempting to regain a sense of rhythm and full fitness just a day or two before a match.

Now that San Jose's match with LAFC is back on, the math will shift on the playoff race in the West. LAFC is aiming for a home playoff game while the Quakes can secure a playoff spot with a win in one of their final two matches. It's not either of those teams that benefit most from the game moving to Wednesday. The Vancouver Whitecaps, a club left-for-dead more than once over the last month, now has a path to the postseason. If the Caps can beat the Galaxy in Portland on the final day of the regular season and San Jose loses both of its remaining games, Vancouver would claim the conference's final playoff spot.

What sums up 2020 better than the Whitecaps eliminated, then un-eliminated, all in the span of 48 hours because of a COVID-19 schedule issue? Vancouver fans are now in the unenviable position of having to root for a Western Conference rival to win over another Western Conference rival for the playoffs to still be in play for their club come Sunday. LAFC destroyed Vancouver 6-0 back on September 23, something Whitecaps fans will not have forgotten.

Like the Whitecaps, the Galaxy is hanging by a thread. Thanks to LA's 2-1 win over RSL on Sunday, the Galaxy has a slim chance of making the playoffs. It will take a win over Seattle on Wednesday night and another over Vancouver on Sunday and help via collapses by both Colorado and San Jose, but it's possible.

Should Galaxy interim coach Dom Kinnear somehow pull off a miracle, he'll make himself a clear candidate for the permanent job. As it stands, the Galaxy head coach position is a free-for-all of rumor and innuendo driven mostly by the club's name-brand recognition abroad. Bringing in the next coach to return the Galaxy to its former glory will have to wait. The season could effectively be over Wednesday, Sunday, or at some undetermined time in the playoffs.

Wednesday's matches are a little less pertinent to playoff qualification in the Eastern Conference, though a pair of games stand out. Chicago plays Minnesota, a Western Conference team already qualified for the postseason, with the Fire in the 10th and final playoff position in the Eastern Conference. Chicago is trying to hold on to that spot over Atlanta, Miami, and DC, none of whom play midweek. It's simple for Chicago. Win and the Fire make the playoffs. Lose or draw, and it will come down to Decision Day.

For two teams already in the Eastern Conference playoff field, Wednesday is about securing a home playoff game and reinforcing championship contender credentials.

Orlando has been one of the best stories of an otherwise depressing season. The Lions used a single goal from first-year player Daryl Dike to beat Montreal on Sunday. At home against Columbus in midweek, Oscar Pareja's team can add fuel to the argument that this isn't just an upstart who might win a single playoff game before crashing out, but a club with real MLS Cup credentials.

Columbus doesn't have the same momentum Orlando carries. Caleb Porter's team did just knock off the Union 2-1 on Sunday and prevent it from locking up the Supporters' Shield. Lucas Zelerayan is back from injury, but there are cracks in the Columbus facade that don't bode well for a deep playoff run. Getting hot with a couple of wins in the season's final stages wouldn't hurt as the Crew attempt to make good on the early season promise it showed.