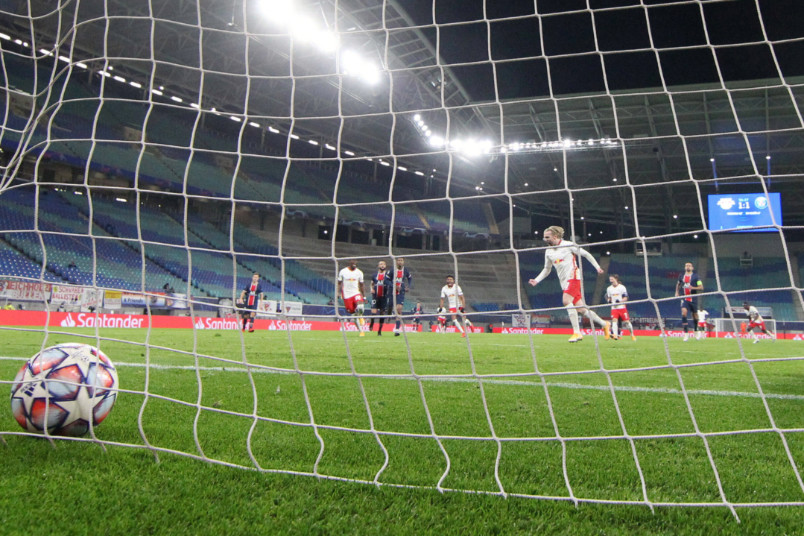 Thursday's soccer news starts with Tyler Adams subbing on in the 76th minute of RB Leipzig's 2-1 home win over PSG. Trailing from a 6th minute goal, Christopher Nkunku equalized for Leipzig in the 41st. Emil Forsberg put Leipzig up from the penalty spot in the 57th minute. PSG finished two men down from red cards in the 69th and five minutes into stoppage time.

Weston McKennie subbed on in the 52rd minute of Juventus's 4-1 win at Ferencvaros. Alvaro Morata put Juve up in the 7th and doubled the lead in the 60th. Paulo Dybala made it 3-0 in the 72nd with Ferencvaros giving up an own-goal in the 81st. Ferencvaros pulled a goal back in the 90th.

Christian Pulisic wasn't in the squad for Chelsea's 3-0 home win over Stade Rennes. Timo Werner converted a 10th minute penalty with Rennes going a man down in the 40th. Werner converted a second penalty in the 41st with Tammy Abraham finishing off the goals in the 50th minute. Ethan Horvath was on the bench for Club Brugge's 3-0 loss at Borussia Dortmund. Club Brugge gave up goals in the 14th, 18th, and 32nd minutes.

In MLS, the playoff picture is a lot clearer after the Wednesday games, at least in the West. Houston, the Galaxy, Real Salt Lake, and Vancouver are out. FC Cincinnati is the only team unable to qualify in the East.

Orlando played a man down for most of the second-half but still managed to beat Columbus 2-1 at home. Chris Mueller put City up in the 27th minute, losing Nani to a red card in the 52nd for a serious foul. Harrison Afful equalized for the Crew in the 56th. Benji Michel scored Orlando's winner in the 84th minute with Mauricio Pereyra assisting on both goals.

Minnesota came back to draw 2-2 at home to Chicago. Robert Beric put the Fire up in the 17th with Mauricio Pineda doubling the lead in the 52nd. Jose Aja pulled a goal back for United in the 64th with Robin Lod equalizing in the 80th minute.

"I look at the end of the day, it's a lot of the same mistakes throughout the whole season," Chicago coach Raphael Wicky said. "First, we create a lot of chances. We miss those big chances. Missing a big chance alone in front of a goalie is like making a big mistake as a defender, as a goalkeeper. So we do mistakes on both ends of the game, and that goes throughout the whole year."

Colorado beat Portland 1-0 at Providence Park. Kellyn Acosta scored in the 83rd minute with Portland not putting a shot on goal.

San Jose held up at home with a 3-2 win over LAFC. Latif Blessing opened the scoring for LAFC in the 23rd with Los Angeles giving up an own goal in the 28th. Chris Wondolowski put the Earthquakes ahead in the 37th and Cristian Espinoza doubled the lead in the 72nd. LAFC's Diego Rossi scored five minutes into stoppage time.

The LA Galaxy and Seattle drew 1-1 at Dignity Health Sports Park, eliminating the Galaxy from the playoffs. Chicharito Hernandez scored for the Galaxy in the 78th with Raul Ruidiaz equalizing in stoppage time.

"I am very happy and very thankful of the San Jose family," Earthquakes coach Matias Almeyda said. "From the groundskeepers, staff, players, to all of our fans. In the best times and the worst times, I've tried to keep calm.... We really stayed calm, careful, and we kept faith in our difficult moments. But we doubled down on our bet and corrected things. When the players began to regain their confidence, I knew there was a possibility to come back."