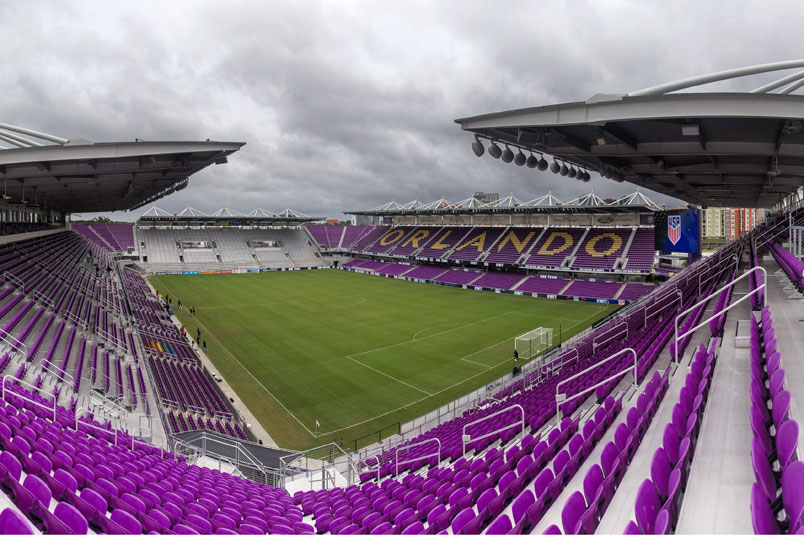 By Jason Davis – WASHINGTON, DC (Nov 25, 2020) US Soccer Players – There’s a certain subset of American soccer fans who are more than happy to accept Major League Soccer for what it is. Although there’s no arguing that the league has taken notable strides in terms of quality and professionalism over its 25 years of history, MLS retains its reputation for sometimes being uneven with its play and refereeing. It is also, for lack of a better word, notorious for being what we’ll politely call weird.

The result was Orlando City advancing to the conference semifinals and a refereeing crew banished from the playoffs. The weirdness waited for penalties after 120 minutes of soccer.

Those penalties took a strange turn when Lions goalkeeper Pedro Gallese saved what his club thought was the deciding penalty. Instead, he saw a second yellow and an unlikely exit after VAR determined that Gallese left his line before NYCFC’s Valentin Castellanos struck the ball. Because Gallese was already carrying a yellow card for time-wasting earlier in the game, the second card resulted in his dismissal.

It was quite the comedown from the wild celebrations that took place after Gallese’s save. Orlando City head coach Oscar Pareja had to return from the locker room after sprinting into the tunnel to inform red-carded defender Ruan that the Lions had won.

It’s important to note that MLS is still using IFAB’s 2019-20 guidelines regarding goalkeeper encroachment, a fact that required referee Allan Chapman to book Gallese a second time for coming off the line too soon. Under the new IFAB standards introduced in the summer for the 2020-21 year, Gallese would simply receive a warning ahead of a retaken penalty. Add “existing in a rules time warp” to the list of strange things about MLS.

Gallese’s dismissal meant Orlando needed a goalkeeper for the rest of the shootout. They tried subbing on backup keeper Brian Rowe. Only injuries allow for substitutions in a shootout, so Orlando turned to defender Rodrigo Schlagel to replace Gallese. Subsequent reporting related that Schlagel volunteered for the job because he occasionally plays keeper when playing with his family in Argentina. A persuasive resume it was not.

We all know what happened. Schlagel did the job with a shuffling save against Gudmundur Thorarinsson. That put Orlando in a position to win with one more kick. That fact that got lost in the moment thanks to Chapman prematurely blowing his whistle to signal the end of the game. NYCFC naturally protested that the Lions needed to make one more penalty to actually win the game.

In the era of social media and second-screen engagement, the shootout generated an explosion of exclamation points from those watching at home. For those enamored with MLS’s brand of kitsch, it was a glorious expression of just what makes the league special. MLS is many things, but boring during the playoffs is rarely one of them.

The growing pains MLS is going through, even 25 years into its existence, manifest via a mixed bag of amazing play and embarrassing gaffs. There’s a high-level of self-awareness among this group of MLS fans. They accept MLS for all of its flaws, paying little mind to how the rest of the world might view the competition.

For those fans, MLS is family. You know how the saying goes, “you can pick your friends, but you can’t pick your family.” You’re stuck with them for better or worse. While you may be harder on them than anyone else, you will never turn your back on them.

In some quarters, one might even call the relationship “codependent.” MLS is trying to improve. Meanwhile, fans sticking by the league in its weirder moments may be celebrating the insanity. That lessens the pressure on MLS to move more quickly.

Not that everyone loves MLS and its antics. There’s plenty of confirmation bias at play. The anti-MLS crowd in American soccer gets ample fodder from things like Orlando’s win.

Maybe those fans wouldn’t give MLS a chance even if the league lacked for the kitschy vibes. Still, it doesn’t help that the league makes it easy to laugh at it. After the Orlando-NYCFC shootout, that even extended beyond the insular soccer community. Sports fans who might not otherwise pay much attention to MLS had their own fun taking the league down over the madness the ensued in the first round of the playoffs.

Like everything about MLS, this too will change. Twenty-five years on from its start, MLS is no longer the fly-by-night operation of its early years. It now spends enough money to put it on par with most leagues in South America and several topflight and second-division leagues in Europe in terms of player value. It garners enough attention nationally that groups are lining up to pay hundreds of millions of dollars to star expansion teams.

For some of us, that would be a shame. Who doesn’t want a little chaos from their soccer now and then?