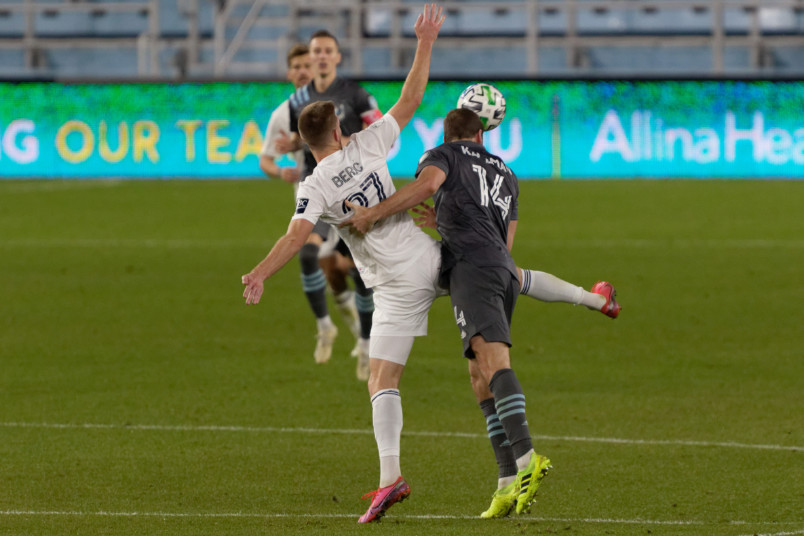 By Charles Boehm – WASHINGTON, DC (Nov 5, 2020) US Soccer Players – If MLS has kept faith in any one guiding principle since its founding a quarter-century ago, it’s the devotion to parity, an inclusive postseason format and the drama of stretch-run playoff races. Now the home stretch of this strange 2020 season has delivered yet another injection of uncertainty. The league announced a late shift to standings calculated via points per game instead of total points.

The latest of many awkward adjustments imposed by COVID-19, a coronavirus outbreak among players and staff of the Colorado Rapids forced the league to respond. That led to a lengthy suspension of play for that club. It’s left them having played three to five fewer games than their Western Conference counterparts. LAFC and Minnesota United subsequently found themselves in a similar boat after positive tests disrupted their schedules, too.

Points per game is the latest compromise inflicted on an already-makeshift schedule. Away teams are mostly traveling to and from opponents’s cities via charter flights on the day of their games. That’s led to a heavily-regionalized slate. Clubs face near-neighbors as often as four times while not even meeting most of the rest of the league even once.

“It is a little bit monotonous,” said New England Revolution head coach Bruce Arena in September. “That’s the reason they expanded the playoffs as well, because the schedule is so unbalanced. It bothers us. When you see the schedule, there are five teams in our conference we don’t play this year. The one thing I guess you can say is an advantage is that you don’t have to do much scouting because you’ve played these teams so many times.”

With the final day of the regular season and FIFA’s November international window imposing a fairly hard stop, the writing was on the wall once Colorado’s number of postponed games outnumbered the open slots remaining on the calendar. Still, frustrations only grew when the league confirmed points per game as the criteria for the first time since the September 11 terrorist attacks brought a premature close to the 2001 season.

“I felt since MLS put in the role of the points per game to decide the playoffs, we had a very slim chance at that point,” Houston Dynamo coach Tab Ramos said after his team lost to FC Dallas over the weekend, eliminating them from playoff contention. “In a way we had been punished for staying COVID-free and being able to play all our games.”

Ramos’ words hint at the elephant in the room. Has the league opted for an answer that unfairly hurts teams who got their games in? Is that even worth asking, given the situation all of us are in right now?

As it turned out, it wouldn’t have mattered for the Dynamo, who currently sit bottom in the West. PPG has nonetheless had an effect on both perception and reality. Teams like the Rapids who’ve played fewer matches have greater significance piled on each match they do play. It appears to widen that gap between three points for a win and one for a draw. Still, those who are winning games down the stretch tend to get the rewards.

“Does it change things? I mean, yeah. You’ve got to try to win out, is what you have to do,” said Sporting KC coach Peter Vermes last week, lamenting that “we don’t control our own destiny” due to the PPG change. “The whole thing at one point was about accumulating points. Now obviously wins are everything. So does it change? We’ve always gone into games trying to win, I think I’ve always been under the opinion that every game is important. But as we all know, when you get down towards the end of the season each game has such an impact, because the final table, the final view is more determined, just because you can start doing all the calculations and figure it out.”

Waiting on COVID test results to learn the upcoming schedule has also crept into the new normal for teams. With LAFC in that position this week, the league gave barely 24 hours’ of official public notice that Bob Bradley’s side would get in their game at San Jose on Wednesday.

That sort of on-the-fly adaptation would have been unthinkable before this year. The simple existence of that match posed hefty playoff implications. The Earthquakes were chasing one of the West’s final postseason places at the time and might not have been thrilled to have to play the team that had won four of their previous five meetings with the Quakes by a combined score of 17-2.

In a signature example of MLS’s enduring unpredictability, the Quakes managed to beat LAFC 3-2, clinching qualification. The league’s leaders treasure such story lines, while most of its coaches and general managers chafe at having these levels of randomness weigh in on their professional fortunes.

In effect, one of the league’s longest-running competitive purity issues reaches its illogical extreme. Expansion and the enormity of the continent led MLS to ditch its best attempt at the “play everyone else home and away” format widely considered the global norm. A year ago, it went a step further when the initial structure of the 2020 campaign featured teams not playing everyone else in the league.

Some consider these imbalances to have drained the relevance of the Supporters’ Shield. The fans who oversee the awarding of that trophy initially elected not to do so for 2020 for those reasons. Widespread outcry led to a reversal there, a recognition that the season’s basic survival was an achievement unto itself. The bigger questions of fairness in MLS won’t be so swiftly resolved.