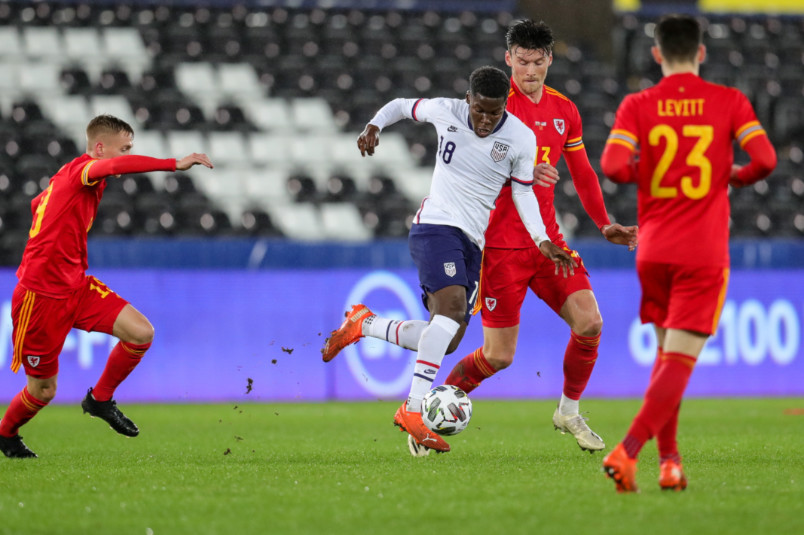 By Charles Boehm – WASHINGTON, DC (Nov 13, 2020) US Soccer Players – The USMNT opened a new chapter on Thursday with their first match since February, showing plenty to like in their 0-0 draw with Wales in Swansea. Gregg Berhalter’s new-look side were short on clear scoring chances, but their dominance in midfield and comfortable management of their defensive third kept them in clear control for most of the 90 minutes. All in all, not bad at all from a young group with ten newcomers in it and only a handful of training sessions together before the game. Here are four takeaways from the friendly.

In the runup to this game, Berhalter effectively announced his shift from a mid-block 4-4-2 shape to a more aggressive 4-3-3 with more active pressing and counter-pressing. It’s a welcome development for many of us who’ve watched his tenure closely as it seems to match the current US player pool and collective mentality.

On the basis of this game, it’s working. The squad seemed eager to set the tempo and get into Wales’s face, pushing their hosts back into their own end with energetic harrying. That created some attacking danger in and of itself by forcing turnovers and confusion, though the USMNT also knitted together some pretty passing patterns.

Wales can point to the absence of superstar Gareth Bale, who sat in a luxury box for this one as the coaches carefully manage his fitness under heavy scrutiny from his club team Tottenham Hotspur. His teammates did seem comfortable conceding the possession battle and limiting looks around their penalty box. Still, there was no question about which team were the protagonists here.

“When you start looking at the numbers and think about how we made Wales play at home, and what they resorted to doing, I think that’s impressive, it really is,” said Berhalter. “They had really low passing percentage, passing accuracy. We had a large share of possession, and it shows that these guys are confident, and that has an effect on the opponent. Also, when you see players like that, and you see their confidence, I think it gives other players around them confidence that it’s going to be OK.”

What worked, what didn’t

The brand-new midfield triangle of Tyler Adams, Weston McKennie, and debutante Yunus Musah was the foundation for the USMNT’s play. Looking like they’d spent far more time together than they actually have, the trio roamed around wreaking havoc on anything Wales tried to build. It was an impressive melding of physicality with soccer intellect.

“It felt like we’ve been playing together for more than just one game,” said McKennie, who’s clearly becoming a leader within the group at age 22. “Props to Yunus for coming in and showing the confidence that he had… it’s a different type of football. It demands something different than what club soccer or club football demands. So, for him to come in and perform how he did, it was a good start… Tyler was the stone wall that he always is, covering ground, breaking up plays winning second balls. So it felt pretty good.”

Fullbacks Sergino Dest and Antonee Robinson poured forward with gusto to support them. While some of their ideas didn’t come off, the number of bodies getting involved in buildups was a promising sight. Behind them, John Brooks was the back line’s standout, both commanding in his defending and classy in his distribution. The Wolfsburg center back managed the high US line and played a number of line-breaking passes to spark moves forward.

“What an important player for us,” said Adams. “The consistency he’s had in the Bundesliga, and the opportunity that I’ve had to play against Wolfsburg, he’s a difficult player to play against. So when you can add such a quality player into the national team that has so much experience, we know he’s going to be so important for us down the line.”

With a midsection and rearguard that sturdy, the USMNT will win a lot more games than they lose. The natural next step is asking where will the goals come from?

Even with such a lengthy gap between camps due to the COVID-19 pandemic, Berhalter gets to experiment in a friendly. His forward line was led by Sebastian Lletget in a “false 9” role. The coach described it as a plan to win numerical superiority in midfield while disorganizing the Welsh defense. As hard as the LA Galaxy veteran worked, it was an unfamiliar spot for him and that showed. Still, he connected most of his passes and nearly cashed in on a clever back-heeled effort just before halftime blocked at close range.

On balance, the false 9 idea came off half-baked. There just wasn’t enough time to prepare it. The tactic didn’t bring out the best in wingers Konrad de la Fuente and Gio Reyna, both teenagers making their senior international debuts.

A more traditional front runner was later introduced in the shape of Nicolas Gioacchini, though 11 minutes gave him scant time to make his case. Hopefully, he and/or Sebastian Soto will get a longer look against Panama. In the meantime it’s fun to ponder what a specialist #9 like Josh Sargent or Jozy Altidore might someday bring to the table in a lineup like Thursday’s.

“Within the first day of training, where we had everyone together, one day was offensive. The second day was our defensive tactics. And then the third day we play a game,” said Adams. “So quickly you have to start to figure out the key elements to what’s going to make us really good. And today, I think you saw small glimpses of what we can do really well, some of our pressing moments, and where we won the ball up the field to be effective in the offensive final third. But there’s a lot that we can improve on, obviously.”

The average age of the current USMNT roster is 21.8. The levels of talent and potential are practically off the charts, though, and that manifested itself in a bevy of stepovers and other fun, flamboyant little skill checks that would make Clint Dempsey proud. There may be some purists out there who didn’t like seeing such flair in a 0-0 situation, yet many fans were thrilled by it.

Given how heavy the responsibilities of representing one’s country can feel at times, it was refreshing that such enthusiasm and confidence flowed through a lineup largely still coming to grips with this level. There was no burden of history carried here, and the players felt it too.

“I think we all know that we like to play – we like to combine, like to make those small touches and small passes, and I think whenever you get into that, not comfortability, but that type of confidence that you can play with your guys and everything, I think it just brings up the confidence in yourself,” said McKennie. “Like Gregg said before the game, it kind of just goes into autopilot, and that’s whenever you plan at your best… So it was just fun. I think a lot of guys had fun being out there. Obviously it would have been much better if we would have won the game, but it’s a good stepping stone and I think it was a good start after not being together for a whole year.”