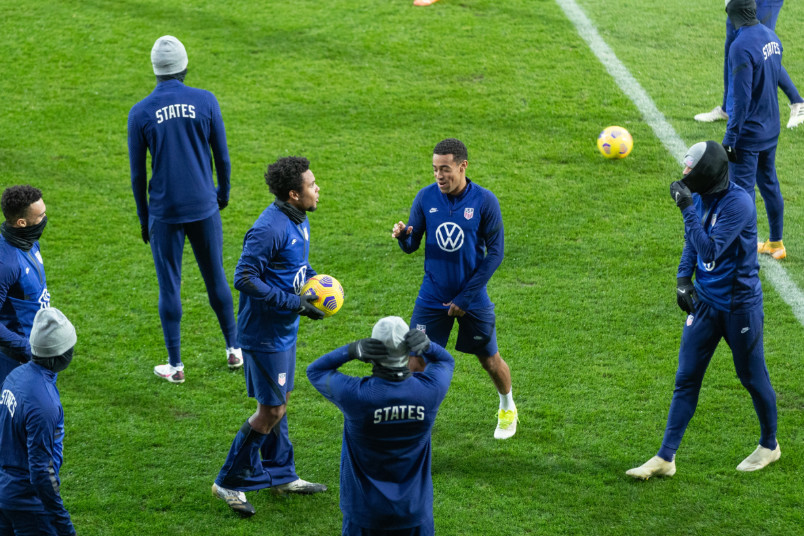 Monday’s soccer news starts with the USMNT back in action, this time against Panama in Austria (2:45pm ET – FS1) to close out the November international window. USMNT coach Gregg Berhalter has already announced a tactical change, going with a target forward for this game. That should create a direct line to goal, something that was missing in the 0-0 draw with Wales.

Considering the brief time in camp, the situation, and the schedule, there’s not a huge amount of pressure on the USMNT to turn chances into goals. It would certainly be nice to show that against Panama, but we’ve already seen that this version of the USMNT can create. The shots on goal stats didn’t show that against Wales, but anybody watching already knows that this is a highly creative group of players willing to take risks. That distinction will eventually show on the score sheet, especially in Concacaf.

Focusing on creative play can undo overmatched Concacaf countries bunkering and looking for a handful of chances on the counter. We’ve seen that with previous versions of the USMNT. Those teams took their game to opponents who end up with bigger issues when tactical fouling turns to frustration.

Panama spent the November window in Austria, losing 1-0 to Japan on Friday. The goal came from a 61st minute penalty with Panama finishing a man down courtesy of a 78th minute red card.

Assuming games go ahead as scheduled, there’s a lot of runway for the USMNT to get to June and games that count. Berhalter putting the focus on the group’s creativity is taking advantage of an obvious asset. The USMNT isn’t going to surprise anybody with young skill players doing interesting things on the ball. Instead, they have to turn that advantage into control.

MLSsoccer’s Dylan Butler has former USMNT coach Bob Bradley’s comments about this version of the national team. Jon Arnold previews the friendly with the focus on Panama.

Also in the soccer news, Duane Holmes’s Derby County parted ways with manager Phillip Cocu. The club is in last place in the Championship, tied with 23rd-place Sheffield Wednesday with six points from 11 games.

“The club would like to place on record its appreciation for the way Phillip and his staff conducted themselves in what were some extremely challenging situations during his tenure,” their statement read. “Phillip and his staff helped develop and establish a considerable number of Academy players in to the first team squad and Phillip made significant financial contributions and personal efforts towards the club’s community projects during the COVID-19 pandemic, which the club are extremely grateful for.”

In League One, Lynden Gooch’s Sunderland lost 2-1 at home to MK Dons. Max Power put Sunderland up in the 12th minute. MK Dons equalized in the 16th and went ahead for good from a 47th minute penalty.

In his first season with Serie A giants Juventus, Weston McKennie is already putting up the kind of numbers that show a complete midfielder.

Chris Armas takes over at Toronto FC with the club looking for its next Designated Player and figuring out how to stay in contention.