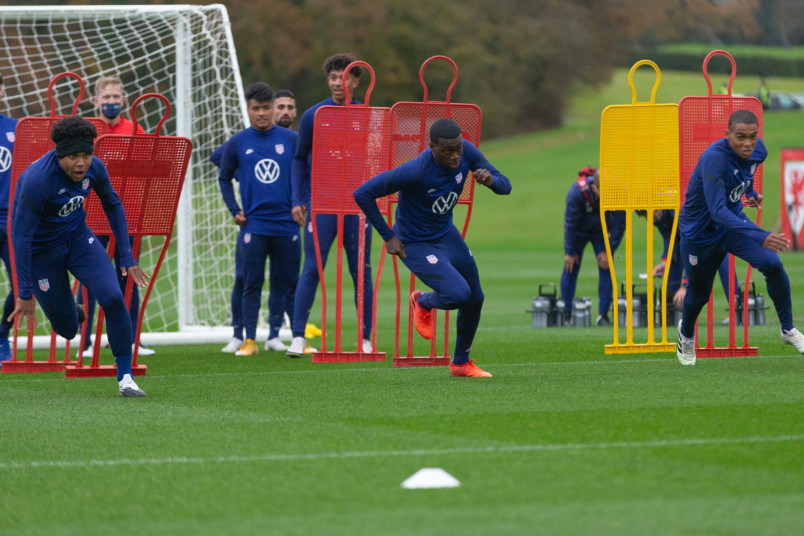 Thursday's soccer news starts with the USMNT returning to action at Wales later today (2:45pm ET - FS1). The USMNT last played with a full choice roster in November, facing a must-win scenario to advance in the Nations League. That tournament won't finish until June, the next time the USMNT plays a game that counts. Technically this isn't a first choice roster. There's one MLS player in the group due to the LA Galaxy's playoff hopes ending prior to Decision Day.

So in these odd times, USMNT coach Gregg Berhalter puts the focus squarely on European-based players. Even that has its limits with Werder Bremen not releasing Josh Sargeant over quarantine concerns and injury issues seeing Christian Pulisic return to Chelsea after a few days in USMNT camp. What's left id a group that trends young, with plenty of emphasis on players that could represent the USMNT in the Olympics. U-23 qualifying for that tournament is also in the "to be determined" category.

The only given for the USMNT is the game in front of it. Wales may no longer be climbing up the FIFA Ranking by careful scheduling of friendlies, but they're the 20th-place team to the USA's 22nd with games that count in November. This is a warmup in Swansea for UEFA Nations League games against Ireland on Sunday and Finland on Wednesday. With Ireland at England today and Finland winning 2-0 at France yesterday, there's the feeling that these friendlies count more than normal. For the USMNT, that an opportunity for this version to come together against a squad with obvious weapons.

"With regards to the squad in the camp, nothing changes," Wales fill-in coach Rob Page said. "We're in such a good place at the minute with regards to coming into these last two qualifiers. So, if it's not broke then don't fix it. There's momentum coming into this camp and it's important that against the USA we keep that momentum going. That will set us up nicely then for two tough qualifiers. We know the rewards are there at the end of it."

Handling Wales is more than stopping Gareth Bale. It's taking advantage of limited opportunities from a stingy defense. Wales has played four games that counted since September, winning three of them 1-0 and drawing 0-0. England beat them in October's warmup 3-0 in a game where the winners put 6 of their 8 shots on goal. Otherwise, Wales doesn't normally give up very much in their defensive end.

Success for the USMNT in Swansea is showing that this group can compete, exert their game and pressure Wales on their terms. That will carry over into Monday's friendly against Panama in Austria, with this version of the USMNT showing what it can do in a short camp in strange circumstances.