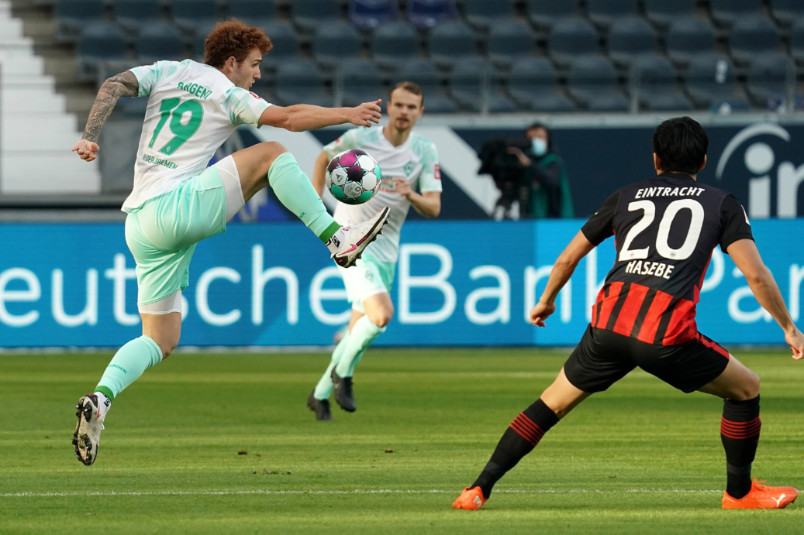 The roundup of USMNT players in Europe and Mexico starts in the Bundesliga. Josh Sargent scored in Werder Bremen's 1-1 draw at Eintracht. Sargent put Werder up in the 51st with Andre Silva equalizing in the 65th minute. Sargent saw yellow in the 55th. Timmy Chandler was on the bench for Eintracht.

"It's always difficult to play here," Sargent said. "Frankfurt attacked a lot, so we had to work a lot defensively. But we fought to the end and earned the point. In the first-half I sometimes lost the ball, in the second-half it worked better. "

John Brooks's Wolfsburg drew 1-1 at Hertha BSC. Trailing from the 6th minute, Bote Baku equalized for Wolfsburg in the 20th.

A league down, Julian Green scored in Furth's 4-1 home win over Hannover. Green opened the scoring for the home side in the 22nd minute with Paul Seguin doubling the lead in the 26th. Branimir Hrgota made it 3-0 in the 52nd. Hannover pulled a goal back in the 58th with Hrgota scoring again in the 68th minute. Bobby Wood subbed on in the 78th minute of Hamburg's 2-2 home draw with St Pauli. Simon Terodde scored for Hamburg in the 12th. St Pauli equalized in the 35th and 82nd. Terodde equalized in the 84th.

Weston McKennie subbed out in the 62nd minute of Juventus's 4-1 win at Spezia. Alvaro Morata opened the scoring for Juve in the 14th with McKennie assisting. Spezia equalized in the 32nd. Cristiano Ronaldo put Juventus up for good in the 59th minute with Adrien Rabiot adding a goal in the 67th. Ronaldo converted a 76th minute penalty. Andrija Novakovich subbed out in the 69th minute in Frosinone's 1-0 home win over Cremonese in Serie B. Marcus Rohden scored in the 38th minute.

Sergino Dest subbed on in the 69th minute in Barcelona's 1-1 draw at Alaves. Falling behind in the 31st and going a man up in the 62nd, Antoine Griezmann equalized for Barca in the 63rd. A league down, Shaq Moore's Tenerife drew 1-1 at Fuenlabrada. Down a goal from the 38th, Jorge Padilla Soler equalized in the 62nd.

Geoff Cameron's QPR beat Cardiff City 3-2 at home in the Championship. Ilias Chair put QPR up in the 15th with Todd Kane doubling the lead in the 27th. Cardiff answered back, converting a 49th minute penalty and scoring in the 85th. Dominic Ball scored for QPR a minute into stoppage time. Cameron saw yellow in the 31st.v Duane Holmes subbed on in the 61st minute of Derby County's 1-1 draw at Bournemouth. Graeme Shinnie put Derby up on the road in the 13th with Rodrigo Riquelme equalizing for Bournemouth in the 81st minute. Cameron Carter-Vickers wasn't in the squad for Bournemouth.

Lynden Gooch scored for Sunderland in their 2-0 win at Gillingham in League One. Sunderland went a man up in the 61st with Chris Maguire converting an 84th minute penalty. Gooch scored four minutes into stoppage time.

Erik Palmer-Brown's Austria Wien lost 2-1 at Hartberg. Trailing from the 10th minute, Benedikt Pichler equalized in the 33rd. Hartberg went ahead for good in the 47th. Aron Johannsson's Hammarby drew 1-1 at home with Hacken. Down a goal from the 17th, Aimar Sher equalized for Hammarby a minute into stoppage time. Matt Miazga's Anderlecht won 1-0 over Antwerp at home in the Pro League. Paul Mukairu scored in the 76th minute.

Luca De La Torre subbed out in the 87th minute of Heracles's 4-1 home win over FC Utrecht in the Eredivisie. Rai Vloet put Heracles up in the 2nd with Silvester van der Water scoring in first-half stoppage time. Utrecht converted a penalty in the 62nd. Vloet finished off his hat-trick with goals in the 63rd and 71st minutes. Eric Lichaj's Fatih Karagumruk beat Buyuksehir 5-1 at home. Badou Ndiaye put Fatih Karagumruk up in the 11th with Licas Biglia converting a penalty in the 28th. Ndiaye scored again in first-half stoppage time with Alassane Ndao making it 4-0 in the 71st. Buyuksehir scored in the 90th with Fatih Karagumruk adding a fifth goal through Erik Sabo a minute later.

On Monday, Antonee Robinson's Fulham shutout West Brom 2-0 at home in the Premier League. Bobby De Cordova-Reid opened the scoring in the 26th minute with Ola Aina doubling the lead in the 30th. Tim Ream was on the bench for Fulham. Reggie Cannon's Boavista shutout Benfica 2-0 at home. Angel Gomes converted an 18th minute penalty with Alberth Elis scoring in the 38th. Mix Diskerud's Helsingborg lost 1-0 at home to Malmo. The game's only goal came in the 15th minute.