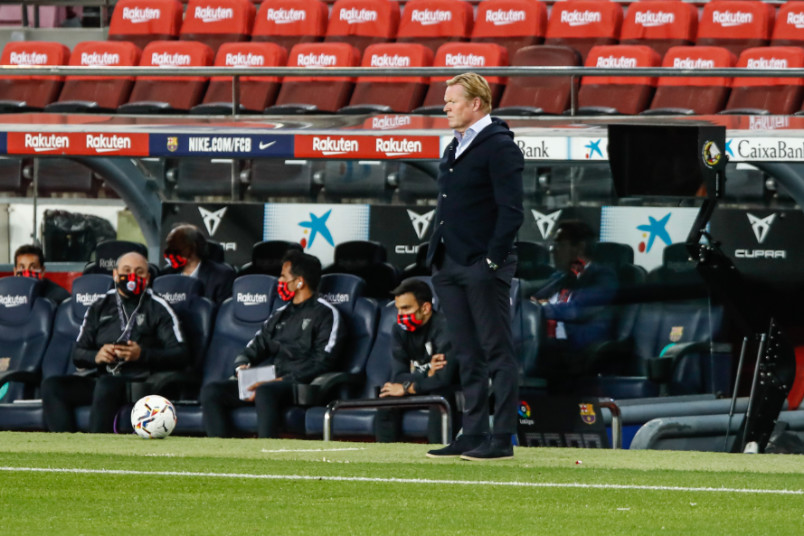 By Clemente Lisi – NEW YORK, NY (Nov 16, 2020) US Soccer Players – Ask a soccer fan about what Barcelona means and you’d hear lots of familiar answers. A name like Lionel Messi quickly comes to mind. So does a tournament like the Champions League. Other responses could include former coach Pep Guardiola or a striker like Neymar, who now plays for PSG.

Maybe it’s the current Barca team and their coach Ronald Koeman. The former defensive midfielder helped Barcelona win the European Cup in 1992, scoring the winning goal in extra time in the final against Italy’s Sampdoria at Wembley Stadium. Koeman is a Barcelona legend, one in a long line of Dutchmen who have influenced the Catalan club for nearly five decades.

That Dutch influence has been in Barcelona’s DNA for generations, from the great Johan Cruyff to the present-day Koeman regime. Even the famous tiki-taka has Dutch roots in Total Football. Koeman is the fifth Dutch coach in Barca’s history, hoping to re-energize a team that almost lost Messi over the summer and is still recovering from last season’s embarrassing exit from the Champions League.

Barcelona’s Dutch masters weren’t only evident on the field. Patrick Kluivert, Edgar Davids and Frank de Boer also played for the Blaugranas. It also comes from coaching and tactics. For Koeman, the return to Barcelona was like a homecoming.

“Today is a day to be happy and proud,” Koeman told reporters in his introductory press conference as coach this past August following Barcelona’s 8-2 defeat to Bayern Munich. “Everyone knows what Barca means to me. It’s my home.”

Here’s a look at the five Dutch coaches who forever changed Barcelona and how their tactics turned the club into one of the world’s best.

Michels was already a legend in his home country before successfully guiding the Netherlands to the 1988 European Championship. It was their first international trophy for the Dutch after losing both the 1974 (where he served as National Team coach) and ’78 World Cup finals during the era of Total Football.

More than a decade before that Euro ’88 success, Michels had served as Barcelona’s first-ever Dutch coach, the start of what would be a decades-long love affair between the club and Dutch tacticians and players. They weren’t exactly taking a risk with Michels. His Ajax team had reset expectations for European club soccer, winning the European Cup in 1971. Michels won the league title in 1974 and the Copa del Rey in 1978 with Barca. In between his two terms in charge at Barcelona, he returned to the Dutch National Team and Ajax. He would eventually leave Barcelona for the LA Aztecs.

Michels liked to employ the 3-4-2-1 formation with the fullbacks moving up to join the attack. His tactics relied heavily on possession, something that has come to define Barcelona over the years, and a creative playmaker in Johan Cruyff.

A legend as a player, Cruyff took the Barcelona job in the summer of 1988. He transformed a mediocre side into what many called a “Dream Team” that over the years featured Guardiola, Koeman, Romario, Hristo Stoichkov, and Michel Laudrup. Cruyff won more than Michels with his 3-4-3 and 4-3-3 formations using three forwards and making both possession and attack a priority.

Establishing La Masia, Barca’s youth academy like one that had made Ajax so great, remains his lasting legacy. That and four Liga titles, a Copa del Rey and the European Cup in 1992. Cruyff gets credit for establishing the style, techniques, and winning culture that Barcelona and even Spain at international level enjoy to this day.

Another former Ajax coach, van Gaal didn’t favor Total Football, where players could assume different positions at any moment. Instead, he preferred clearly defined roles in an attack-minded 4-3-3 that wasn’t all that different from Cruyff. Like his Dutch predecessors at Barcelona, van Gaal always wanted to play an attractive brand of soccer, although he was rigid in his tactics no matter the opponent. At Barcelona, that meant two central midfielders tasked with creating offense and three strikers.

Despite winning two Liga titles and a Copa del Rey in his first stint at Barca, van Gaal butted heads with Rivaldo. The Brazilian wanted to play as a center forward, but van Gaal used him at left wing. As a result, Rivaldo was often on the bench. Van Gaal returned for the 2002-03 season, losing the job in January 2003 as Barcelona languished in 12th-place. Rivaldo, at AC Milan, would go on to win the Champions League that season.

Barcelona’s love affair with Dutch coaches continued in 2003 with the hiring of former defensive midfield star Frank Rijkaard. The Dutchman’s 4-3-3 lineup featured the attacking trio of Ronaldinho, Samuel Eto’o, and Lionel Messi. Rijkaard also used a 4-3-2-1, but with little success. His years at Barca are often unheralded, but they shouldn’t be. True, Rijkaard had a budding Messi in the lineup and would end up winning two league titles and the Champions League in 2006.

Rijkaard favored a team that played like a cohesive unit, and it served him well. Like his qualities as a player at Ajax and AC Milan, he liked tenacious midfielders and players not afraid to mix a fluid style with physical play.

Koeman the Barcelona player was phenomenal. As a coach, he has a European pedigree as well as the expected time in charge of Ajax and the Dutch national team. He spent the 2007-08 season coaching Valencia in La Liga before a return to Dutch club soccer and eventually the Premier League. What that means for this version of Barcelona is an open question. Koeman has employed a defensive-minded 4-3-2-1, a departure from the 4-3-3 that was used as recently as last season.

Koeman’s formation is similar to the one recently used by the Netherlands and by Ajax. Barcelona, however, has traditionally been an attack-minded team. How successful this formation can be remains a question mark. Currently eighth, Barcelona has struggled in a season that currently features Real Sociedad at the top of the table, followed by Villareal.

Soccer in the COVID-19 era has been unusual. How this Barcelona team adapts to it and whether Messi can drag his teammates to victory once again remains to be seen. Koeman’s success, ultimately, depends on it.

Koeman could end up like van Gaal, but could easily be hailed as another Rijkaard should Barcelona win the Champions League. It all depends on how this season goes for yet another Dutchman at the helm of one of the world’s most-popular clubs.