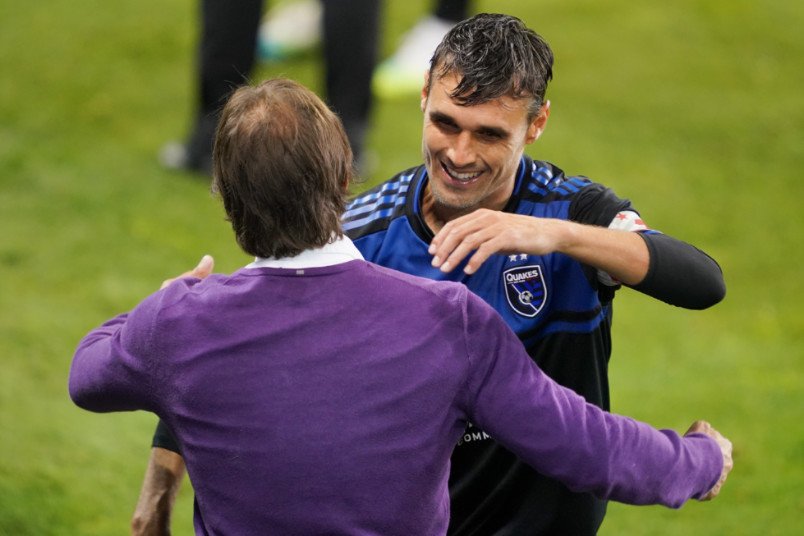 By Jason Davis – WASHINGTON, DC (Nov 6, 2020) US Soccer Players – To properly tell the story of the San Jose Earthquakes in 2020, we have to go all the way back… to last season. You remember 2019, right? Smiling faces, full stadiums, soccer that didn’t feel like it was happening in the middle of a slowly unfolding apocalypse. Back in 2019, things were “normal,” whatever that means, and the San Jose Earthquakes were playing through their first season under coach Matias Almeyda.

Securing Almeyda’s services ahead of the 2019 season was seen as a massive coup for an MLS franchise that lacked significant spending power or a name brand market. Whatever the reasons for Almedya’s move to the Bay Area, his arrival was a game-changer for the Quakes. He’d have to make do with a roster that finished dead last in the league in 2018, but at least there was hope.

Almeyda’s first season was what we’ll politely call chaotic. The club started disastrously, losing its first four games. They looked more likely to set records for defensive ineptitude than making the playoffs. The situation was bad enough that speculation bubbled up that Almeyda might not make it through the year.

Then, Almeyda’s aggressive man-marking system clicked. The Quakes started winning. Between April 6 and August 3, San Jose collected 38 points from a possible 57 and rocketed up the Western Conference standings. Instead of a defensive disaster that left gaps all over the field in horrific losses, Almeyda’s team became a whirlwind of action that was truly difficult to play against.

It didn’t last. The rigors of the long season, the energy expended, and the usual injury attrition hammering a thin squad did a number on the Quakes. The wheels fell off by the middle of August. San Jose went 2-0-9 in its last 11 games and missed the playoffs.

Worse, with the season on the line in the last few weeks of the campaign, Almeyda and his team went nuclear. Almeyda got himself sent off against Atlanta in a 3-1 loss to Atlanta on September 20, and club legend Chris Wondolowski earned the only red card of his career.

Rumors grew that Almeyda might leave dogged the team into the early stages of the offseason. Almeyda ultimately committed to staying. That good news ran alongside the reality that the club was unlikely to spend much on the roster.

2020 has been a long, strange trip and though that’s true for every team in the league. The Quakes added an extra layer of surreality to the journey. No matter the circumstances, normal, pandemic, post-apocalyptic, Almeyda’s brand of soccer and intense personality makes for wild swings in form and results.

The Quakes started the season much like they ended 2019. They earned a single point in two games before the shutdown, with a humbling 5-2 loss to Minnesota United on March 7. It didn’t bode well for a turnaround.

With the restart came the chaos. Over a month between the end of August and the last week of September, the Quakes failed to register a single win, collected three points out of a possible 24, and suffered shocking defeats by scorelines of 7-1, 6-1, and 5-0. The possibility that Almeyda might not make it through the season grew. MLS can be a forgiving league for coaches, but it seemed difficult to imagine a club could justify keeping on a coach with a spree of embarrassing losses.

The Quakes stuck with Almeyda, and Almeyda restated his belief that his team would turn around its results. There was no talk of changing the approach. Almeyda is a true believer in his methods and seems to be immune to doubt. It turns out that he was right.

After the disastrous month, the Quakes ran off a three-game winning streak as part of a stretch featuring four wins in five matches that pushed them back into the playoff conversation. San Jose clobbered their old rival, the Galaxy, 4-0 on October 15 with a joyful display that solidified their candidacy. Almeyda, of course, delivered a nonplussed analysis.

“I think we have repeated this type of performance many times in the past, except without the goals. Even when things were going badly, we always had this system of play,” Almeyda said. “A few times we were able to achieve this offensive system. We are happy with today’s victory.”

Wednesday’s win over LAFC locked up a playoff spot for San Jose. They celebrated like you’d expect, dancing up a storm on the field at Earthquakes Stadium in front of the sadly empty stands.

San Jose could improve its standing by a single place with a win on Decision Day and losses by some of the team just in front of them. There’s a good chance that will happen. It’s also possible they stay where they already are. Same finish, very different feeling.