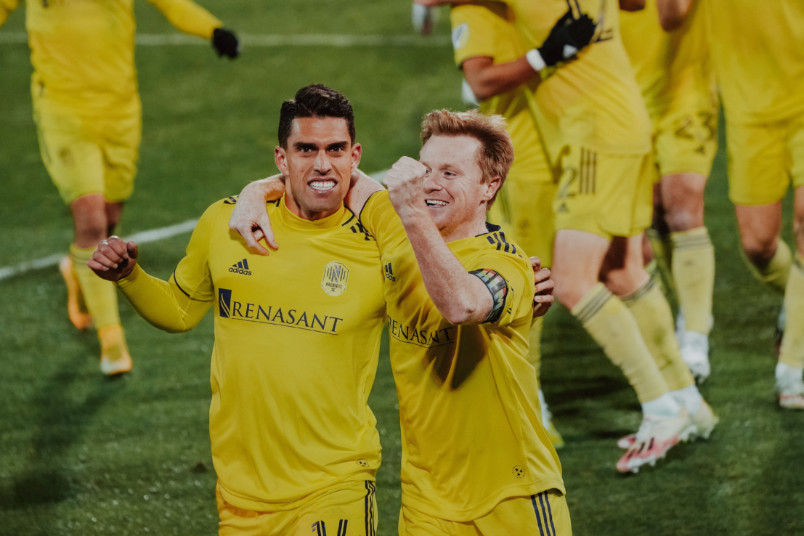 Wednesday’s soccer news starts with reconsidering what success means in the Eastern Conference. The top two regular season finishers are out, with the MLS playoffs once again demonstrating that upsets can become the norm. The night started with 2nd-seed Toronto exiting to Nashville 1-0 at Rentschler Field. With the game scoreless through regulation, Daniel Ross got the game’s only goal in the 108th minute. Nashville goalkeeper Joe Willis kept the clean sheet with five saves.

Philadelphia saw its Supporters’ Shield winning season end with a 2-0 home loss to New England. Adam Buska opened the scoring in the 26th minute with Tajon Buchanan doubling the lead in the 30th. Carles Gil assisted on both goals. New England goalkeeper Matt Turner recorded the shutout with four saves.

“Obviously, a very good performance against a team that had a great regular season,” New England coach Bruce Arena said. “Undefeated here in their home stadium, so it’s a tremendous win and now we got to somehow recover and get our team ready to play Sunday.”

Moving to the Western Conference, Seattle knocked out LAFC 3-1 at home. Nicolas Lodeiro put the Sounders up in the 18th minute with Jordan Morris and Raul Ruidiaz assisting. Ruidiaz scored in the 66th. Eduard Atuesta pulled a goal back for LAFC in the 77th. Morris doubled the lead in the 80th with Ruidiaz and Lodeiro assisting. LAFC had a late goal ruled offside by instant replay.

In the Champions League, Sergino Dest opened the scoring in Barcelona’s 4-0 win at Dynamo Kiev. Dest’s goal came in the 52nd minute. Martin Braithwaite extended the lead, scoring in the 57th and adding a 70th minute penalty. Antione Griezmann finished off the Barca goals two minutes into stoppage time. USMNT player Konrad de la Fuente debuted for the senior squad, subbing on in the 83rd minute.

“I’m really happy to score my first goal,” Dest said. “I think overall we played good as a team. Everybody played good, and we took the win…. We have two more games to go, but we are in a good position right now.”

Weston McKennie subbed out in the 62nd minute of Juventus’s 2-1 home win over Ferencvaros. Trailing from the 19th minute, Cristiano Ronaldo equalized for Juve in the 35th. Alvaro Morata scored their winner two minutes into stoppage time. Gio Reyna subbed out in the 81st minute of Borussia Dortmund’s 3-0 home shutout of Club Brugge. Erling Haaland put Dortmund up in the 18th with Jadon Sancho doubling the lead in the 45th. Haaland scored again in the 60th minute. Ethan Horvath was on the bench for Club Brugge.

Christian Pulisic wasn’t in the squad for Chelsea’s 2-1 win at Rennes. Callum Hudson-Odio put Chelsea up in the 22nd with Rennes equalizing in the 85th. Olivier Giroud scored Chelsea’s winner in stoppage time, sending them through to the knockout round with two games left to play. Tyler Adams was on the bench for RB Leipzig’s 1-0 loss at PSG, who took the lead from an 11th minute penalty.

Moving to England’s Championship, Geoff Cameron subbed out in the 66th minute of QPR’s 3-2 home win over Rotherham United. Ilias Chair scored for QPR in the 10th with Rotherham equalizing in the 38th. Bright Samuel returned QPR’s lead in first-half stoppage time with Lyndon Dykes adding a penalty before halftime. Rotherham pulled a goal back in the 84th minute.

Cameron Carter-Vickers wasn’t in the squad for Bournemouth’s 2-0 home win over Nottingham Forest. Junior Stanislas scored in the 3rd and converted a 51st minute penalty. In the Netherland’s Eerste Divisie, Richy Ledezma subbed out at halftime of Yong PSV’s 1-1 home draw with Yong Utrecht. Trailing from the 33rd minute, Mathijs Tielemans equalized for Yong PSV in the 57th.

Multiple outlets are reporting that soccer legend Diego Maradona has died. We would like to offer our sympathy to his family and join the world in mourning a player who showed incomparable skill on the field.