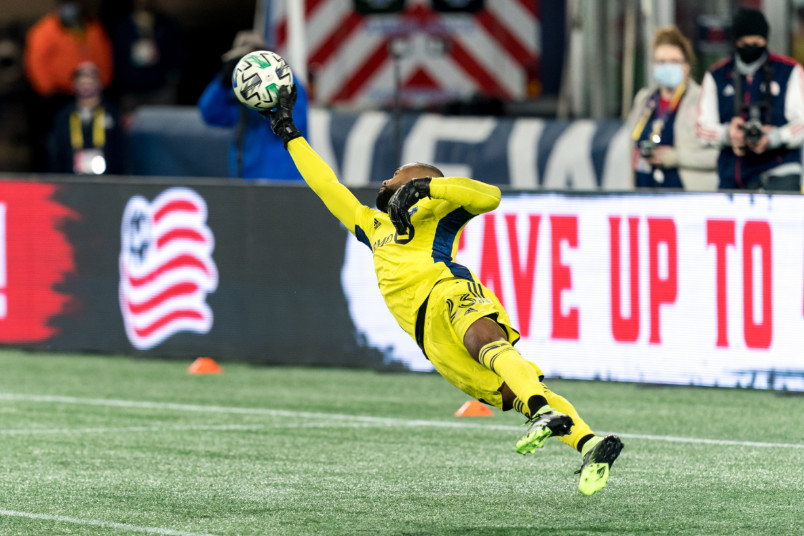 By Charles Boehm – WASHINGTON, DC (Nov 27, 2020) US Soccer Players – The Philadelphia Union’s best-ever season had just crashed to a shuddering halt well before it was supposed to, and Alejandro Bedoya was infuriated.

“I mean, it’s one thing to be performing at an elite level during the regular season, but playoffs are playoffs,” said the Union captain and USMNT veteran ruefully after his team’s 2-0 first-round home loss to the New England Revolution on Tuesday. “They’re a different beast.”

Philly is the latest in a long line of Supporters’ Shield winners to find six to nine months’ worth of hard and effective work fizzle into nothing thanks to one off night in the “second season.” It’s one of several baked-in quirks of the league’s championship structure, which is hitting new notes in the unique setting of 2020.

The opening week of this week’s MLS Cup Playoffs served up several fascinating encounters and some real drama, enough to give the regular-season champions’ upset loss competition for the lead story. Once again, there’s the reminder of just how different the season’s final month can feel in comparison to its first eight or nine.

Penalties decided three of the eight round one matches. That started with the particularly absurd Orlando vs NYCFC affair. An extra-time goal decided a fourth. The elevated stakes were clear even to casual observers. A good chunk of very compelling action unfolded in prominent major network television slots. The East’s top two seeds are out. So is the West’s third-seed. The challenges and changes wrought by the COVID-19 pandemic may have helped narrow the margins, with signs that home-field advantage isn’t counting for much.

Last year’s format shift to single-game rounds rather than the two- or three-legged series of old was designed to reward regular-season success while amping up the intensity. That shift appears to be having its intended effect. The caginess typically required to navigate an aggregate tie has ebbed in favor of win-or-else urgency. What the league may care most about is the possibility of a wider brand taking shape around what Sports Illustrated called “the zaniness that is quintessentially MLS.”

Underdogs still get their shot but have a seemingly smaller margin for error in which to take it. Beyond the Revs’ ambush of Philly, FC Dallas knocked off Portland, the New York Red Bulls made Columbus sweat more than they logically should’ve, and the endearingly chaotic San Jose Earthquakes gave it their best go against Sporting KC. In some cases, flawed teams proved as watchable in their own way as the more complete ones.

What’s endured is the sense that playoff advancement still hinges on momentum, key plays, and high-grade talent. Designated Players tend to be a trump card when it matters most. This year, the likes of Carles Gil, Gustavo Bou, and Raul Ruidiaz have shown both elite quality and a nose for decisive moments. That’s fostering a conventional wisdom that strong collectives win Shields and star individuals win Cups.

“I don’t think… anyone’s really won MLS Cup since 2013 with Kansas City that a team that wasn’t in the top 10 of spending,” Columbus Crew SC president Tim Bezbatchenko, who previously played a key role in building Toronto FC’s 2017 treble-winning squad, said on the eve of the playoffs. “It’s different than winning Supporters’ Shield where you have the Philadelphias, the New York Red Bulls who have shown they could do it over the course of the season. It’s a little bit different in MLS Cup [playoffs], where the players need to step up and make the plays to win games.”

Nashville, the expansion Cinderella story, has provided a rejoinder of sorts. Forging deeper into the postseason than any newcomers since the title-winning Chicago Fire of 1998, they’ve shown the value of clear and well-honed tactical identity and a strong run of form. Nashville entered the playoffs on a 4-1-2 hot streak and, like the Revs, made Friday’s play-in game look like a benefit rather than a drawback in a well-earned defeat of Toronto FC.

MLS has been tweaking its playoff format more or less continuously since its birth. It will probably continue doing so well into the future as it balances the need for competitive merit with the desire to cultivate an attractive entertainment product. Still, at this point, that restlessness does seem to be gradually pushing the concept closer to its best self.

Let’s be honest. It’s easy to make the playoffs in this league. This season, the field grew to its largest ever size with 18 participants, packaged as a concession to the irregularities introduced by the pandemic. From a marketing standpoint, this has kept the overall media product from shrinking much in size as the format change trimmed out second-leg matches. That’s probably more important than we realize when taking into account the TV deals that come up for renewal in 2022.

MLS TV ratings have mostly been stubbornly mediocre for years. It would be unrealistic to expect that to change on the back of a few good playoff matchdays. The elimination of the New York and Los Angeles teams is a setback in these terms, while Canadian clubs tend to be a drag on US viewership. Still, it’s hard to imagine what more could happen to make for a more enjoyable show than what we’ve gotten so far.

In fact, this month’s fun has led some to wonder how MLS could make the postseason a bigger chunk of its overall presentation. One idea is to split the season along the lines of Liga MX’s apertura/clausura structure, which effectively doubles the playoffs and allows for a shorter attention span on the part of viewers. Another is to build a permanent place for some iteration of the MLS is Back Tournament. NWSL recently enacted something like this by adding its comparable NWSL Challenge Cup in its competitive framework for 2021.

Would playing up its knockout situations enhance or marginalize MLS’s rank-and-file regular-season games? This debate is not new. It takes on additional permutations with empty stadiums, budget and revenue cuts, and wider uncertainty about the future. Even a quarter-century in, the league still seems to be debating what it wants its most important product to be.