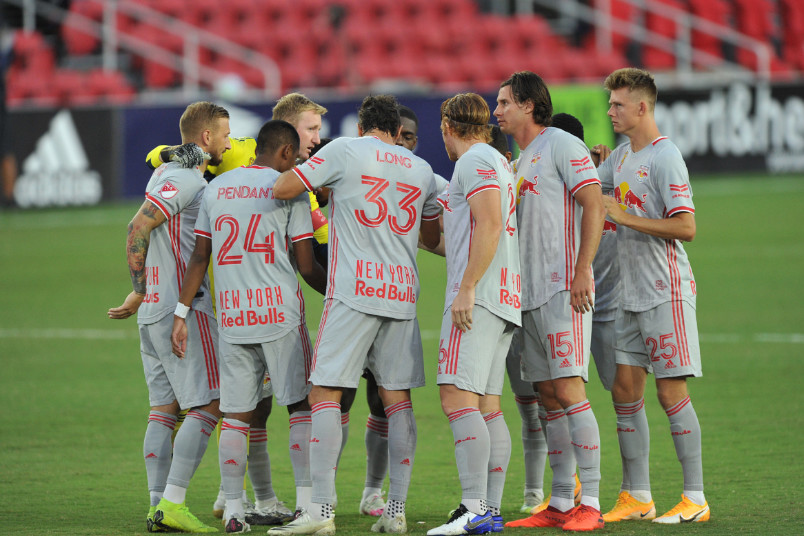 By J Hutcherson (Nov 10, 2020) US Soccer Players – The New York Red Bulls finished sixth in the Eastern Conference, taking the final automatic playoff place and with a sizeable lead over the rest of the clubs in the play-in round. Given that the club fired a coach and shouldered significant criticism over its squad this season, it’s a success of sorts. Points per game gave them the edge over three teams tied on 32 points with all of the Eastern Conference completing 23 games.

The Red Bulls celebrated Decision Day with a 2-0 home win over Toronto. Every game Toronto has played recently carries the caveat of injuries and a depleted squad. Still, New York ended the regular season by beating an Eastern Conference power and denying them the Supporters’ Shield.

“Here at the Red Bulls, ever since I’ve been here we’ve had a high standard,” interim coach Bradley Carnell said following that win over Toronto. “Three Supporters’ Shield titles in six years, so I know what the standards are and I know what the expectations are. When I agreed to take over the helm here for the interim, this is my ambition.”

Carnell touched on what quickly turned into problems for his club. Being the best team in the regular season never got them to an MLS Cup final. As their nearest and dearest rivals would no doubt like to remind them, the Red Bulls have a reputation for playoff exits. Whatever magic they can pull together over the regular season doesn’t continue through the Eastern Conference playoff field.

Last season as defending Supporters’ Shield holders, New York finished 6th and exited the playoffs in the opening round. Their regular season issues centered on trouble away from home. Squandering road points is nothing new in MLS, but the Red Bulls did a job of it winning five, drawing three, and losing nine games with a -9 differential. Swap those win and loss numbers for what they did at home with a +11 differential, and 2019 was a roadmap for what not to do this season.

If the 2020 season had gone ahead as scheduled, it’s worth wondering how soon the absence of attacking options would’ve shown for the Red Bulls. With Bradley Wright-Phillips a worthwhile signing for LAFC, New York should’ve already been wondering if they’d made a mistake. Wright-Phillips scored eight times for NYCFC, while Brian White scored five goals to lead the Red Bulls. It’s worth pointing out that Wright-Phillips is part of a high power offense and got chances that would’ve otherwise fallen to Carlos Vela. Still, it’s not a good look when you lack a like-for-like answer for your outgoing forward when he stays in the league.

What probably best positions the Red Bulls right now is what they did in between their 2-1 home loss to Inter Miami and their 5-2 loss at NYCFC. Undefeated over those five games, they won twice with 1-0 scorelines. The rest were score draws, suggesting this is a team that can control games against clubs with better records like Toronto and Orlando. That’s in contrast to their up and then quickly down restart that cost Chris Armas his job in early September.

The Red Bulls haven’t exactly righted their road issues. They finished with three wins, three losses, and four draws away from home. Unlike last season, this is a team that normally doesn’t let games get away from them. That 5-2 loss at Yankee Stadium suggests otherwise, but the first-half was extremely competitive. If that’s the norm for the Red Bulls, opening the playoffs at 3rd-place Columbus may not be a sizeable advantage for the Crew.

The Red Bulls find themselves in that old MLS scenario. There’s no knockout round for them this season, but there’s still the feeling that a first-round exit is a failure. That would cast back on the abbreviated season raising that familiar set of questions leftover from 2019.

What isn’t as certain is how far the Red Bulls need to go to confirm this season as successful. Beating Columbus means knocking out a higher seed on the road. Assuming that they’re playing a higher seed in the next round, showing well may be enough to convince management that there’s something to build on.

That’s its own tricky scenario. Using this season to decide what to do for next season is far from straightforward. It’s not just the small sample size. It’s the situation across the board for all clubs. Some of the surprise playoff misses are already talking like this is a normal situation. They’ll bring in a new coach, spend on players, tick the MLS boxes for how teams build in the offseason. Maybe that works. Maybe all it accomplishes is creating a new set of problems.

It was so easy to criticize the Red Bulls going into 2020 for not spending on its offense. With their defense normally keeping games close, that kept them out of trouble. That’s not a solution for a team collecting Supporters’ Shields. The Red Bulls may find themselves with plenty of reasons to consider this season more success than failure. That shouldn’t keep them from finding a better way forward.