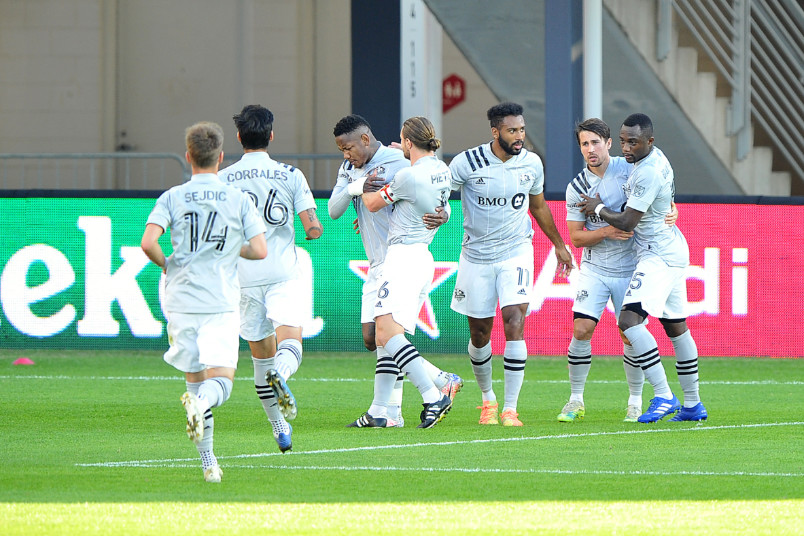 By J Hutcherson (Nov 19, 2020) US Soccer Players – Coming up with a problem where the only answer was a convoluted solution, Major League Soccer kicks off its Eastern Conference play-in round on Friday. After realigning the conferences to restart the season, MLS felt it had no choice but to reset playoff expectations in the now-14 team Eastern Conference. Instead of advancing the top eight finishers like they did in the West, MLS extended the Eastern playoff field to ten teams with the final four places entering a play-in round.

For Nashville, New England, Montreal, and Inter Miami, that means an extra game playing out on Friday night to reduce those ten playoff clubs to eight. It’s already a very good question for what that extra game means to the clubs that will end their seasons on Friday. Waiting through the international break for one more game may seem silly in retrospect, especially if 7th-place Nashville and 8th-place New England go through.

Given what we’ve seen so far in MLS this season, that’s far from an obvious conclusion. Upsets in the playoffs seem likely and with them revisions of what counts for success this season.

For both expansion teams, this is more than either of them could’ve possibly planned for their debuts. It’s worth the reminder that switching from total points to points per game wasn’t necessary in the East. All 14 clubs played 23 games, with points per game not doing anything interesting to the standings. 6th through 8th-place all finished with 32 points and 1.39 points per game. Major League Soccer’s institutional stubbornness in sticking with international standards means total wins beats goal difference for the first tiebreaker. The New York Red Bulls took 6th-place and avoided the play-in round that way even though they had the lowest goal differential of those three teams.

Montreal is six points behind in 9th-place on 26 points, with Inter finishing the season in 10th with 24 points. That was one better than 11th-place Chicago. 23 games is 11 short of what MLS intended, effecting the sample size in a league where winning and losing streaks are common. That’s the long way round to get to what we can politely call “playoff uncertainty.”

Friday night’s double elimination won’t do much to clear up that picture. If the underdogs advance, it’s a clear upset but not necessarily a clear concern for the top two. 1st-place Philadelphia and 2nd-place Toronto should like their chances regardless of who advances. They’re already set with the Eastern Conference Semifinals the clear distinction between success and disappointment in 2020. Both should expect to meet in the finals, but advancing out of the first round should be enough. This is still a strange attempt at getting in the regular season. We simply don’t know what really counts for good.

That’s something that should resonate up and down the playoff brackets. Teams looking to validate what they put together for 2020 may not find it even if they end up in the final. There’s too many questions, bigger issues, and that trend for good teams to bow out in the playoffs.

Add to that the very real risk the pandemic continues to pose, and this may be enough of a set of circumstances for teams to opt against yet another panic rebuild. That doesn’t take the pressure off of the playoffs, but it might reset expectations for the clubs still playing.

We’ve already seen teams decide that this version of the MLS season is regular enough to “part ways” with coaches. That’s a tired MLS euphemism, but it does lead to the bigger point. Parting ways with a coach means parting ways with a system as well. That normally requires changes to the squad in the short and long-term, alongside a new coach that will be more than happy to decide when that team becomes their own.

Suppose the two expansion teams advance from the play-in round. Nashville should do that regardless based on form and a strong defense. Inter Miami would be an upset, knocking out an up-and-down Montreal. Considering that New England has Bruce Arena in charge and the Impact convinced Thierry Henry to return to MLS, does anybody see either of those organizations using a play-in round exit as reason enough to make a change?

Extend that into the first round proper, and there aren’t any obvious candidates for clubs that would count not advancing as the kind of failure that leads to immediate change. Philadelphia and Orlando City are both having breakout seasons. Toronto and Columbus have no reason to decide that one and done in the 2020 playoffs are more than enough justification to bring in a new coach. Neither does NYCFC under first-year coach Ronny Deila. The Red Bulls finished the season under an interim coach after already making that decision in September. New hire Gerhard Struber’s first MLS game in charge will be in the playoffs.

Whether or not that removes some pressure isn’t a given. MLS clubs don’t necessarily work on what would pass for logic in theory. Emotion is certainly involved. A lopsided exit could force club leadership to decide that there has to be a better way forward. That’s what a one and done playoff system could expose, even for clubs that seemingly have it together. It’s the risk vs reward at the end of this bizarre season.