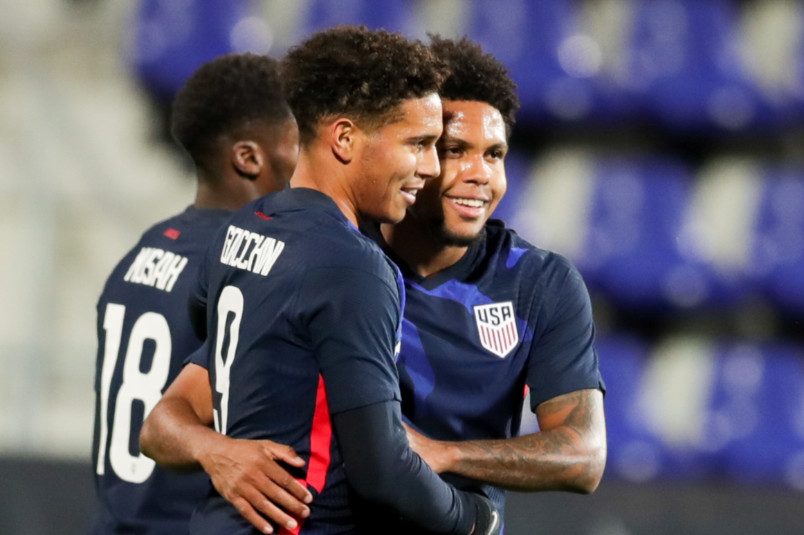 Tuesday’s soccer news starts with the USMNT attack finding itself with plenty of opportunities against an overmatched Panama in a 6-2 win in Austria. It’s worth the reminder that Panama led early in the first-half, but the USMNT eventually established the kind of rhythm that ended up with Nicholas Gioacchini and Sebastian Soto both scoring twice.

Soto’s goals came late, with the USMNT scoring three times after the 80th minute. That stage of the game becomes more about Panama breaking down, shifting the focus to what happened when the game was 3-1 between Gioacchini scoring his second in the 26th minute and Jose Fajardo pulling Panama within one goal in the 79th. What we saw over that stretch was similar to what the USMNT did against Wales. They kept control, establishing a flow in the attack while not letting Panama see much of an opportunity to get back into the game.

Panama in Austria may not be representative of what the USMNT will see this summer at the Gold Cup. Then again, the odd situation of a Concacaf friendly in middle Europe speaks to the strange times during the pandemic. Doing the work counts regardless of the situation, and that should be the big takeaway from the November friendlies.

The year-long gap between international windows for the USMNT created a situation where gradually bringing young players into the system turned into rethinking the system. That’s where USMNT coach Gregg Berhalter deserves credit for playing to circumstances. This version of the USMNT is noticeably looser, even when playing with a withdrawn forward against Wales. Switch that to a target forward or a traditional strike partnership against a team with less tactical nuance, and the chances open up.

For years, the USMNT under more than one coach would go up against weaker opponents with two traditional defensive midfielders and a back four. What that created was an unnecessary imbalance, as if the risk of giving up a goal was greater than the chance of scoring them. This version of the USMNT doesn’t need that kind of hedge, especially when it disrupts their flow. It’s easy to trust players when they’re doing similar jobs with elite European clubs. Still, breaking away from safety is difficult at international level.

It’s still a long way to games that count, but that may be the biggest takeaway from this restart window. We already knew that this version of the USMNT would be different with younnger European-based players. What we saw over these two friendlies is how different.

SI.com’s Avi Creditor looks at how the USMNT came back against Panama. American Soccer Now’s Brian Sciaretta puts the focus on what Gioacchini brings to the national team. The Atheltic’s Paul Tenorio on the positive takeaways from the USMNT win.

Also in the soccer news, FIFA is pushing ahead with the 2020 Club World Cup, moving it to February, 2021 in Qatar. Concacaf’s Champions League bubble next month in Orlando will now advance the winner to the Club World Cup. It’s certainly worth asking why additional games at league, confederation, or international level are necessary, but it’s not surprising that FIFA made the decision to go ahead.

“The introduction of strict return-to-play protocols has facilitated a successful resumption of continental club championships the last of which is now scheduled to conclude by the end of January 2021,” FIFA’s statement read. “As a result, the FIFA Club World Cup 2020 will now be held from 1 to 11 February 2021, taking place in Qatar as per the original host appointment by the FIFA Council in June 2019.”