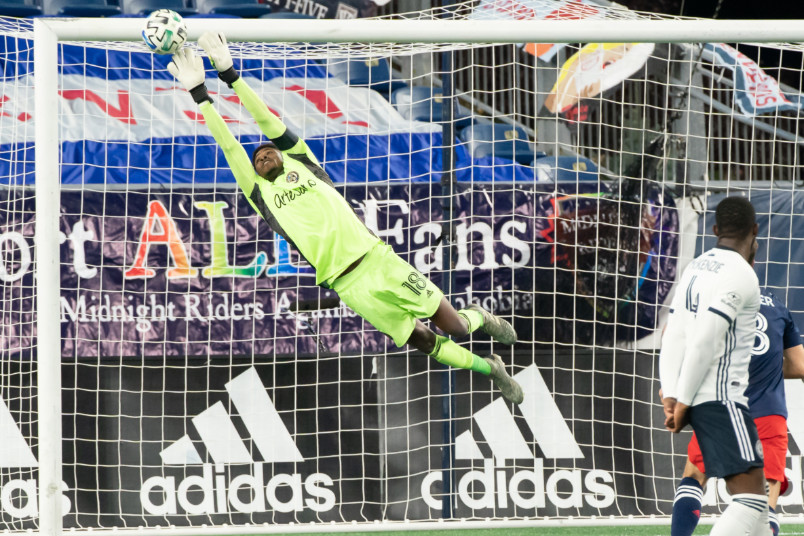 By Jason Davis – WASHINGTON, DC (Nov 13, 2020) US Soccer Players – Like with everything else we usually do, the Major League Soccer end-of-season awards are happening despite the strangeness of the current moment. There are several questions worth asking as the soccer community debates honors like “Defender of the Year,” “Young Player of the Year” (new in 2020!), and “Most Valuable Player.”

Perhaps the most obvious is whether it’s fair to judge performances this season considering the concessions MLS made to the coronavirus pandemic in its schedule. Even without the problem of mismatched game totals, there are issues involving the heavily unbalanced schedule, relocated Canadian teams, and the MLS Is Back tournament.

Should the events of MLS Is Back be included in the award season consideration? The group stage games for every team who participated counted towards the regular-season standings, but the knockout round games exist in a netherworld obscured by the haze of the pandemic. It seems wrong not to include them as part of the season. That only further unbalances the amount of information per player that goes into award voting.

The upshot of all of this is that every voter has to make his or her own peace with the “regular” season. The awards must be awarded.

One of the more interesting lists of finalists announced by the league on Wednesday was for the biggest award on the board: Most Valuable Player. The MVP award prompts heated debate even in a normal year. The world “valuable” often gets ignored. Instead, the award goes to the league’s best players determined by goals and assists.

If it sounds like there is a bias against any non-attacking players, that’s because there is. In MLS’s history, only one player whose primary job was to prevent goals has ever won the MVP award. Goalkeeper Tony Meola took the trophy in 2000.

Meola was truly remarkable in goal for the Kansas City Wizards that season. His 16 shutouts remain the league’s single-season record. Meola set it in just 31 regular-season games. He posted a 681-minute shutout streak, another record the still stands. Meola’s play carried the Wizards to the best record in MLS and an eventual MLS Cup title. As if to drive home the point that he was indeed the league’s MVP in 2000, Meola also won MVP of the MLS Cup final thanks to 10 saves against the Chicago Fire in the 1-0 Wizards win.

A doubter might assume that perhaps Meola walked away with the MVP in 2000 because the league was bereft of great attacking performances that season. They’d be wrong. Meola earned the award despite Tampa Bay’s Mamadou Diallo scoring 26 goals in 2000. Meola won because Meola’s performance lifted his team. His value was clear and voters knew it. He won the MVP because he was exactly that.

It’s at least possible that Meola will have company on the list of MLS MVPs very soon. When the shortlist for the 2020 MLS MVP award went public Wednesday, the category featured four attacking players (Alejandro Pozuelo, Diego Rossi, Nicolas Lodeiro, and Jordan Morris) and one goalkeeper, Andre Blake of the Philadelphia Union.

Let’s just get the reality of the situation out of the way before we could any further. Blake is a longshot. Not only does the history of the award work against him, but each of the other finalists for MVP has a strong case for winning the trophy in a pandemic-altered season.

Of course, Blake’s team won the Supporters’ Shield. Pandemic-altered or not, the Union finished the season as the only team with a points-per-game average higher than 2. Blake was a key figure in reaching that threshold, playing 21 of 23 regular-season games and giving up a paltry 18 goals all year.

Blake posted eight shutouts, second only to Nashville goalkeeper Joe Willis’s nine. His save percentage ranked in the top five of all goalkeepers. Beyond the counting stats, Blake’s play passed the eye test for “value.” His play saved Philadelphia points regularly throughout the truncated regular season. It’s not crazy to say that the Union not only doesn’t win the Supporter Shield but that the club might not be a top-four finisher in the East without Blake.

We’ll skip the analytical argument that Blake wasn’t even the league’s best goalkeeper this season. It is conceivable that he loses out on the Goalkeeper of the Year Award even while making the shortlist for MVP.

Despite the lone win of the MVP award by a goalkeeper in Major League Soccer’s 24-year history, there is an argument that goalkeepers have a better chance at winning the honor than other defensive players. It comes down to counting stats, a problem for defenders and midfielders whose contributions sometimes get lost in the flow of a game. Soccer doesn’t traditionally highlight defensive actions like tackles, interceptions, and recoveries in the stats we consume. Quite often, the nature of defending is purely positional, something almost impossible to boil down to a simple countable event.

It’s hard to imagine Blake will overcome the bias towards attacking players, but it’s still an achievement even to make the shortlist. Though the shortlist this season is longer than in years past, Blake joins Meola and Joe Cannon in 2004 as the only goalkeepers to even get that recognition.

Then again, this is a strange season. If there was another year when a goalkeeper could win MVP, it might be this one. None of the attacking performances were all that dominant. The season’s lack of rhythm will affect voter perception. The Union finished with the league’s best record. They deserve to have an individual player recognized for his season.

Will Blake win the MVP? Probably not. Should he? That’s a tougher question.