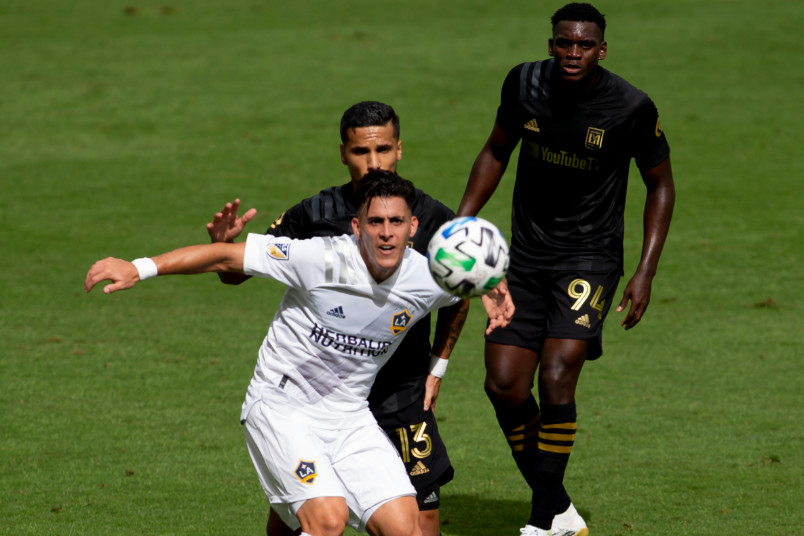 By Luis Bueno – RIVERSIDE, CA (Nov 4, 2020) US Soccer Players – Through it all, the Galaxy had one coach capable of leading them out of the doldrums. That period was not just one of success but also of stability. The reason, in large part, was Bruce Arena.

The post-Arena era has been quite the opposite. The Galaxy parted ways with coach Guillermo Barros Schelotto following the Galaxy’s 5-1 loss to Portland last week with three matches left in the regular season. With Barros Schelotto’s exit, assistant coach Dominic Kinnear took over on an interim basis. Kinnear’s first game in charge was a 2-1 home win over Real Salt Lake.

Just how much turmoil the club is in can be seen in the head coaching numbers. Since 2017, the Galaxy has had four different head coaches: Curt Onalfo, Sigi Schmid, Barros Schelotto, and Kinnear. Any club would prefer the kind of stability and success that has more MLS Cups than coaching changes.

A piece is already in place for the Galaxy. The club brought in Dennis te Kloese as general manager before the 2018 season. While his choice for head coach did not work out, te Kloese is still the right person for this position.

There is only one Arena. Thinking that the club will be able to find another pillar of success to serve as both the architect and conductor of a championship-caliber club is asking for too much. To get out of the Western Conference abyss, the club needs a structure it currently lacks. te Kloese can build that for them, even on the expedited MLS timeline.

It’s worth the reminder that this team was built to trigger around Chicharito Hernandez. Playing as a goal poacher requires the ball and the player to be there at the right moment. More often than not, this version of the Galaxy has difficulty creating those moments.

It was clear from when the rumors turned into Chicharito joining the club that he wasn’t a like-for-like replacement for Zlatan Ibrahimovic. Chicharito’s game isn’t competing for the scoring title like Carlos Vela at LAFC or Raul Ruidíaz in Seattle. Chicharito’s time in Europe didn’t lend enough to make direct comparisons. Those are different types of teams playing in different leagues. What worked there may fail over an MLS summer.

Hernandez isn’t the only issue for this version of the Galaxy. Aleksander Katai was supposed to have been a linchpin in the Galaxy’s midfield. Off the field issues led to his departure, something that would catch any team off-guard. Cristian Pavon has been a revelation. Unless Boca Juniors, who hold Pavon’s contract, is willing to come down from its rumored $20 million price to make the move permanent, Pavon will go back to the Argentine club once the season ends.

While that would free up a Designated Player spot, it creates a familiar situation for the Galaxy. There’s a lack of institutional memory and league experience. With the team in a constant rebuild, not enough of the squad knows the Galaxy way. It’s certainly worth asking if that even exists anymore. This is a club continually starting from scratch with another marquee player. 2021 looks to be no different.

That doesn’t exactly sound enticing for an inbound coach with bold ambitions. How much the Galaxy is willing to do with the roster is an open question. So is what the transfer market will look like in January and beyond.

Another set of rumors already link former Galaxy star Robbie Keane with the job. There’s no doubt he knows what it takes to win in MLS and the role of a goalscorer. He was both during his time with the club. Barros Schelotto had the MLS coaching experience to go with playing in the league, but it’s a different set of circumstances with Keane. Where Barros Schelotto had a coaching reputation to live up to and hopefully surpass, Keane has only been an assistant with Ireland and Middlesbrough.

Keane might come close to being that energizing figure to lead the team forward through this upcoming phase. He’s one of the most popular players in club history. If the character that he displayed on the field during his playing days can come through as coach, then the club will surely benefit.

If it’s not Keane, the Galaxy must find someone to reignite what makes this club special. As much as it antagonizes fans of other teams, the Galaxy has the pedigree to expect more than simply making up the numbers in the Western Conference. They’re historically a big game club in a major market, well aware of what their success means for the league overall. There’s a real cost to that.

This Galaxy has to be rebuilt the old-fashioned way. A focused general manager brings in high-priced talent from overseas, develop top homegrown talent, and hires a strong coach who can guide a team under heavy scrutiny by MLS standards. At least one of those pieces is already in place.