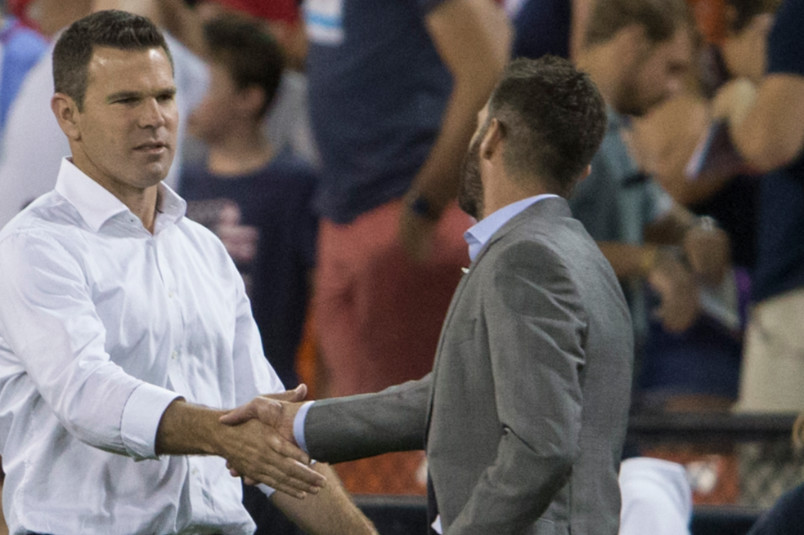 By Jason Davis – WASHINGTON, DC (Dec 4, 2020) US Soccer Players – Finding a new coach is never easy. Most of the time, the only reason for the search is because something has gone wrong. The likeliest reason is poor results. Maybe there was a personality conflict. Perhaps it was simply wanting to try something else somewhere else, leaving the team to scramble to find someone just as good to take the reigns.

Turning a team around means the next coach has a lot of work to do to get the club into a contending position. Taking over a team that would’ve otherwise continued with who they had means meeting a high bar with a demanding fan base.

How tricky that can get is already on display in Major League Soccer as 2020 comes to a close. The MLS playoffs won’t conclude until the second week of December, but the decisions facing a set of coachless clubs commands a healthy share of attention.

In DC, Los Angeles, and Atlanta, clubs are looking for a coach to return their programs to the top of the MLS mountain. In Toronto, the leadership is hoping to find someone who can keep their club at the summit.

Despite some general similarities, each situation is different. Recent club history, established levels of ambitions, and the identity of the club with the fan base all play a role in where each might turn in its search.

Let’s start in Atlanta, where the Five Stripes are trying to rebuild after the Frank de Boer era. It almost needs no more explanation, but Atlanta failed dramatically transitioning from Tata Martino to de Boer. There wasn’t a championship, the sole satisfactory conclusion to an Atlanta season. That underlined the difference in approaches. De Boer’s dismissal back in July surprised few.

Choosing the next head coach means threading a very particular needle for Atlanta. The new boss must play fun soccer, the better to recapture the attention of fans who pine for the run-and-gun exploits of Martino’s teams. The choice must have a reputation because Atlanta established itself as a “big club” in its earliest days.

It’s hard to imagine that Atlanta’s fans will accept a coach from inside the American soccer community for that reason. Outside of Bruce Arena or Bob Bradley who have jobs in the league, it’s challenging to come up with a name that might satisfy Atlanta’s ambitious self-image. It’s not that they couldn’t win with an American coach. It’s just that selling an American coach to the fanbase would be more difficult.

Signaling ambition is an easy way to invigorate the fans and improve a club’s ability to recruit. For better or worse, a coach’s resume can go a long way towards convincing players to sign who might have otherwise taken a pass.

Of course, installing a new head coach is a two-way street. The club can chase anyone it wants, but if the preferred targets aren’t interested, it’s a non-starter. In an MLS where control over the roster typically lies with a set of executives, in-demand coaches might not want to take the gig.

That division of power is also a factor for clubs whose struggles go back further than Atlanta’s. DC United’s decision to dismiss Ben Olsen made plenty of sense, but it now leaves one of the league’s proudest franchises with a delicate task. “Ambition” is a tricky idea for a team that hasn’t kept up with spending trends across MLS in recent years.

DC United’s ownership doesn’t seem willing to spend big money, limiting the pool of potential coaches it can hire. Coaches with impressive resumes might want total control in addition to a hefty salary, two things DC seems unlikely to give out.

United must also be wary of the message it sends to its fans via its head coaching selection. There are several steps between the current state of the club and competing for an MLS Cup title. That doesn’t mean a frustrated group of supporters will give the front office time.

No team should hire a coach based solely on name recognition. A coach’s “fit” is just as, if not more important, than the list of his accomplishments or the pedigree of his former clubs. Atlanta United has learned as much. The rest of the clubs currently searching for head coaches will elevate “fit” to the top of their criteria list.

The problem is that “fit” is a difficult thing to pin down. Teams don’t hire coaches they don’t believe will fit with their roster, style, or identity. Using the nebulous idea of “fit” allows clubs to hire coaches with thin resumes or previous underwhelming records while claiming they’re the best man for the job. Closer to reality, they might be one of the few legitimate candidates who won’t command a high price.

For the LA Galaxy, the calculation is somewhat different. Following a “name” coach’s failure and with significant resources available, they would do well to prioritize an understanding of MLS and an ability to work with big egos. The Galaxy have history to consider. Coaches with international renown haven’t fared well at the helm of the five-time MLS Cup champions.

The latest entry in the head coaching sweepstakes, Toronto FC, might have the most interesting problem. The Reds are an established MLS power with expectations of contending every season. Whoever takes on the challenge of following Greg Vanney won’t get much benefit of the doubt.

Because Toronto’s only successful head coach was a North American with no previous head coaching experience, TFC’s leadership might be able to sell the fanbase on a similar hire to replace him. There are still potential pitfalls. There’s danger in bringing in a coach who fans view as below the standard of the team.

MLS is well into an era where the league is more globally attractive than ever. Clubs across the league are signing talented young players out of South America. There’s a wave of academy-developed players proving the developmental environment. With all of that in mind, it can be very difficult to determine what kind of coach is the right one.

Doing that in the middle of a pandemic? Finding a new head coach is never easy, no matter why you’re doing it. Right now, for the clubs currently on the hunt, there’s an extra level of complication.